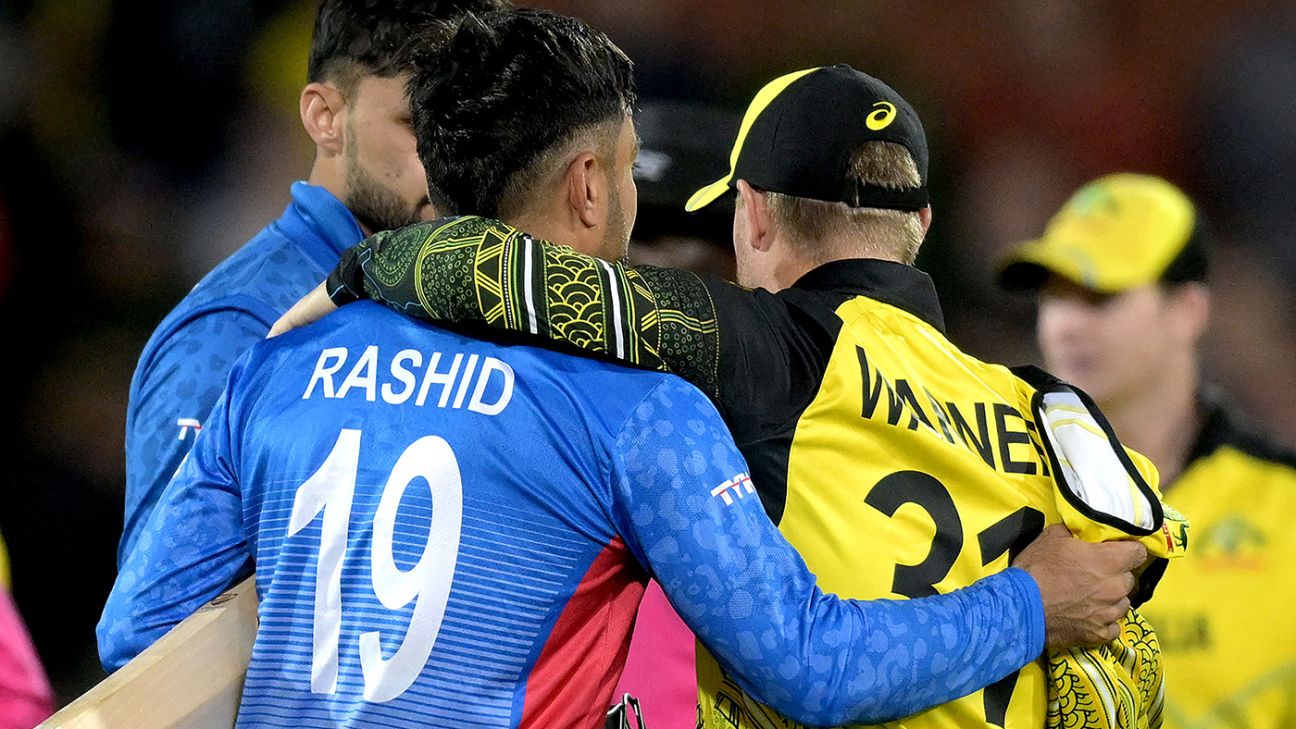 Glenn Maxwell did his best to keep Australia’s semi-final hopes alive with an assertive, unbeaten half-century, but the hosts’ chances of reaching the knockouts are out of their hands after a classy performance from Afghanistan, who gave them an almighty scare chiefly through Rashid Khan at Adelaide Oval.
Defending champions Australia needed to contain their opposition to 106 runs or fewer to overhaul England’s net run rate even before England play Sri Lanka in their final group game on Saturday. The hosts managed 168 for 8 from their 20 overs on the back of Maxwell’s knock after Naveen-ul-Haq and Fazalhaq Farooqi took five wickets between them to restrict their opponents to a total that looked competitive for the match but not so much to ensure their progression .
New Zealand have sealed a semi-final berth (Australia needed to beat Afghanistan by 185 runs to beat their NRR) and it was the Black Caps’ 89-run victory in their opening match that proved so costly to Australia’s title defence. Now, only an upset by Sri Lanka over England will see Australia through; if England win, they will join New Zealand in the next phase.
Chasing 169, Gulbadin Naib shared a 59-run stand with Ibrahim Zadran for the third wicket but with a flurry of four wickets in nine balls – two to Adam Zampa in his last over – Australia wrested back control of the match. Rashid frightened the home fans, while thrilling his own supporters at the ground known as his ‘second home’ when he plundered an unbeaten 48 off 23 balls at the death, but Australia managed to hold on and win by four runs.
Controversial call
There was plenty of buzz about this match, given what was at stake for Australia, and the chatter grew ever louder when Mitchell Starc was left out of their line-up. Aaron Finch and Tim David were replaced by Cameron Green and Steve Smith less controversially after both failed to pull up adequately from hamstring injuries. But Starc making way for Kane Richardson left commentators and spectators confounded. Starc had been largely used through the middle overs at this tournament, but his damaging yorker and proven ability to blast out opposing sides were seen as a potential missed opportunity on this occasion.

As it happened, Richardson struck with his third ball of the tournament, removing Rahmanullah Gurbaz for a sprightly 30 off 17 balls. Gurbaz had made an eventful start, smoking the sixth ball of the Afghanistan innings into the second tier over deep square leg off Josh Hazlewood, surviving a sharp run-out chance as bowler Pat Cummins side-footed the ball onto the stumps and apparently hurting his shoulder as the two collided inadvertently in the process. Gurbaz was deemed fit to bat on and made a valuable contribution.

Maxwell, Marsh play their part
Mitchell Marsh found himself at the crease in the third over after Cameron Green fell for just 3, slashing Farooqi to Gulbadin at slip. David Warner had helped himself to four fours by this time, and was running for everything. But it didn’t work. Marsh had seen Warner and Smith depart in the same Naveen over before he was put down at point by Najibullah Zadran off Gulbadin with 19 to his name. Marsh went on to reach 45 off 30, slog-sweeping Mujeeb Ur Rahman over the square-leg boundary and sending Gulbadin’s leg-cutter into the stands straight down the ground. But he fell top-edging Mujeeb straight above his head for Gurbaz to hold the catch behind the stumps.

Cue Maxwell’s excellent knock as he powered his way to 54 not out from just 32 deliveries. He peppered the boundary with some impressive shots through the covers and twice cleared the fence over midwicket to keep Australia’s tempo and heads up.

Afghanistan tease heartbreaker
Naveen’s three wickets were pivotal in putting a lid on an Australian side needing as big a total as possible to help their troubled title ambitions. Then, Gurbaz’s bright start and Gulbadin’s determined innings before he was run out by an excellent Maxwell throw from midwicket had Afghanistan within touching distance the magical 106-run total that would have helped Australia’s NRR comparison with England considerably. When Afghanistan went from 98 for 2 to 99 for 5 and 103 for 6, they were still shy of the mark.

Then in came Rashid, a star of the Adelaide Strikers’ side in the Big Bash, to compile his career-best T20I score. He proceeded to smash four sixes, including back-to-back maximums off Richardson into the stands over deep midwicket and long-off and another off Marcus Stoinis beyond deep square leg that left his side needing 12 off the last two balls of the match. He managed two into the gap between long-on and long-off followed by a four that left Afghanistan just short of their target but the crowd not short of excitement.

Akila Dananjaya’s fifer vs New Zealand – 1st Test at Galle
Ibrahim Zadran’s record-breaking 162 helps Afghanistan pile up 313 for 8
Milne, Mitchell lead from the front to bowl India out for 219 in series decider
Cummins does not want to lose Australia’s realistic chance at WTC final (once again)
1st ODI Highlights | Sri Lanka vs Afghanistan