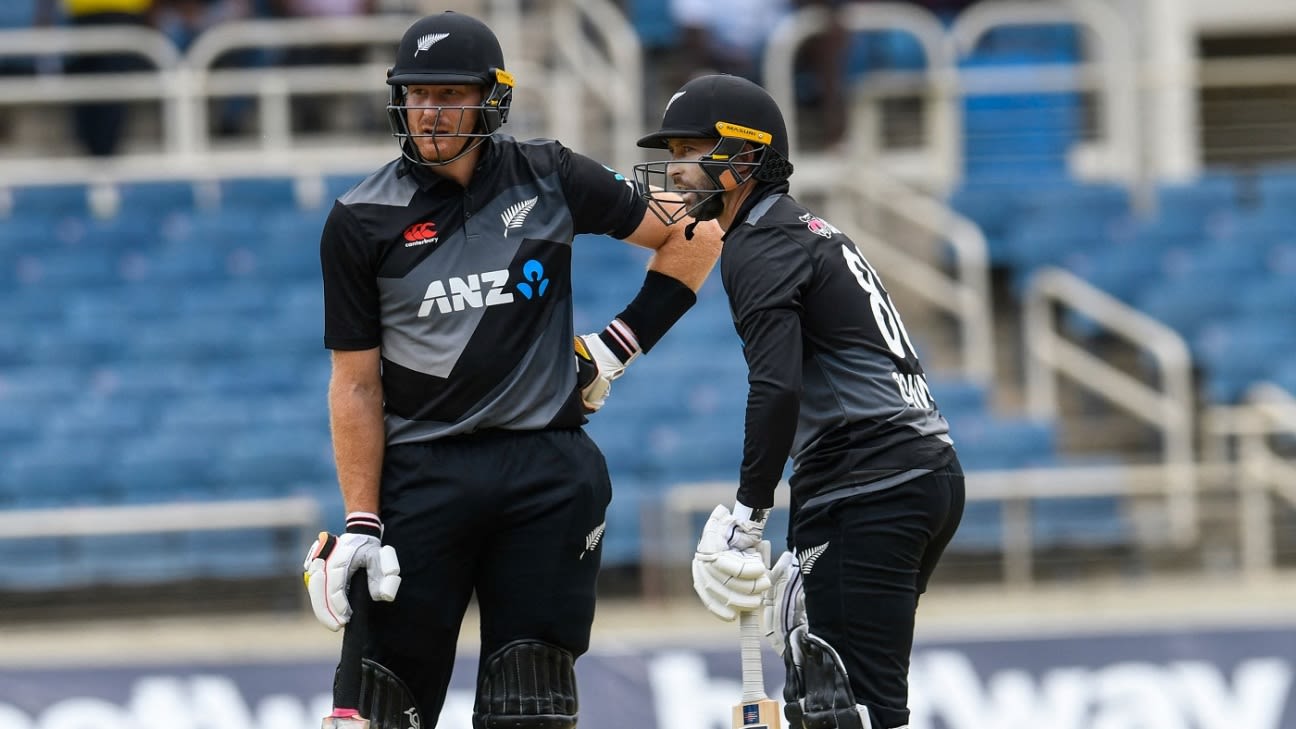 New Zealand are back at full strength for this series after a month of playing with an extended squad in Europe.

“I wouldn’t say we have set roles as of yet,” Conway said after scoring 43 off 29 balls in New Zealand’s 13-run win in the first T20I in Kingston. “This is a great opportunity to try different combinations. It’s nice that everyone is back though.

“It will obviously provide good opportunities for guys to experience different roles. Whatever they may be in the future of this series, we don’t know, but it’s exciting for us to just try different combinations and work through different roles.”

Wednesday’s game was Conway’s first T20I since last year’s World Cup. However, between then and now, he had an impressive maiden IPL season, where he struck three half-centuries in seven innings for Chennai Super Kings and had a strike rate of 145.66.

On his return to the format, Conway began the series with 43 off 29 balls to set the base for New Zealand’s 185 against West Indies. Kane Williamson, returning from a chronic elbow injury that has troubled him since 2019, made 47, while Jimmy Neesham provided the final boost with an unbeaten 33 from 15 deliveries.

“It was really good to be back out there again,” Conway said. “I’ve had three weeks’ break from the group, so it was really refreshing to see everyone again. It was just good to be out in the middle. Obviously, everyone’s excited to go out there and play. Yeah, it was a really good day at the office.

“We’ve got some really powerful and skillful players. If you look at the likes of Kane, he may not be as explosive or powerful as Neesham, but can strike at 150 on his day – even at 200 for that matter. He just brings a different skillet to the team.

“We have quite a lengthy group of batters eager to put their hat in the ring, and this series will provide opportunity for quite a lot of players to take responsibility with any of the roles they’re given.”

Conway was particularly pleased with how New Zealand closed out the game after West Indies’ lower order attempted a comeback towards the end. From needing 78 off the last five overs, Rovman Powell, Romario Shepherd and Odean Smith provided some late fireworks to end only 13 short.

Conway: “Our spin attack is exciting. We’ve got Mitchell Santner turning it away, [Ish] Sodhi has more mystery”•AFP/Getty Images

“Lot of credit to their batters for the way they batted, there was some remarkable hitting from a couple of the guys towards the end,” Conway said. “It was quite cool to experience close-up the depth and power they have.

“Naturally, if you have a team six or seven down, you think there’s not a lot to come, but this group they have is explosive and they keep coming hard. It was about seeing the game off whenever you could and not giving them an opportunity at the back end even if you’re ahead. We did that today.”

Left-arm spinner Mitchell Santner took 3 for 19, including the big wickets of Nicholas Pooran and Shimron Hetmyer, to win the Player-of-the-Match award.

“Our spin attack is exciting. We’ve got Santner turning it away from the batters, [Ish] Sodhi has more mystery,” Conway said. “We know Santner can bowl in the first six [overs], and that provides an option for us to hold a seamer back for a little longer and bowl at the death. Our bowling attack covers most bases.

“We’ve got guys swinging it away from the right handers, a left-hander swinging it in, [and] resources like Neesham and Daryl Mitchell who can take pace off. Someone like Matt Henry is on the fringes, ready to get an opportunity. It’s certainly exciting for our bowling unit to have the resources we have.

“The group we have is similar to what we had in the previous World Cup. There’s good experience, knowledge and trust, so we don’t have to look to change too much. We just need to tweak certain things to give us the edge to get the performances we want as a group.”