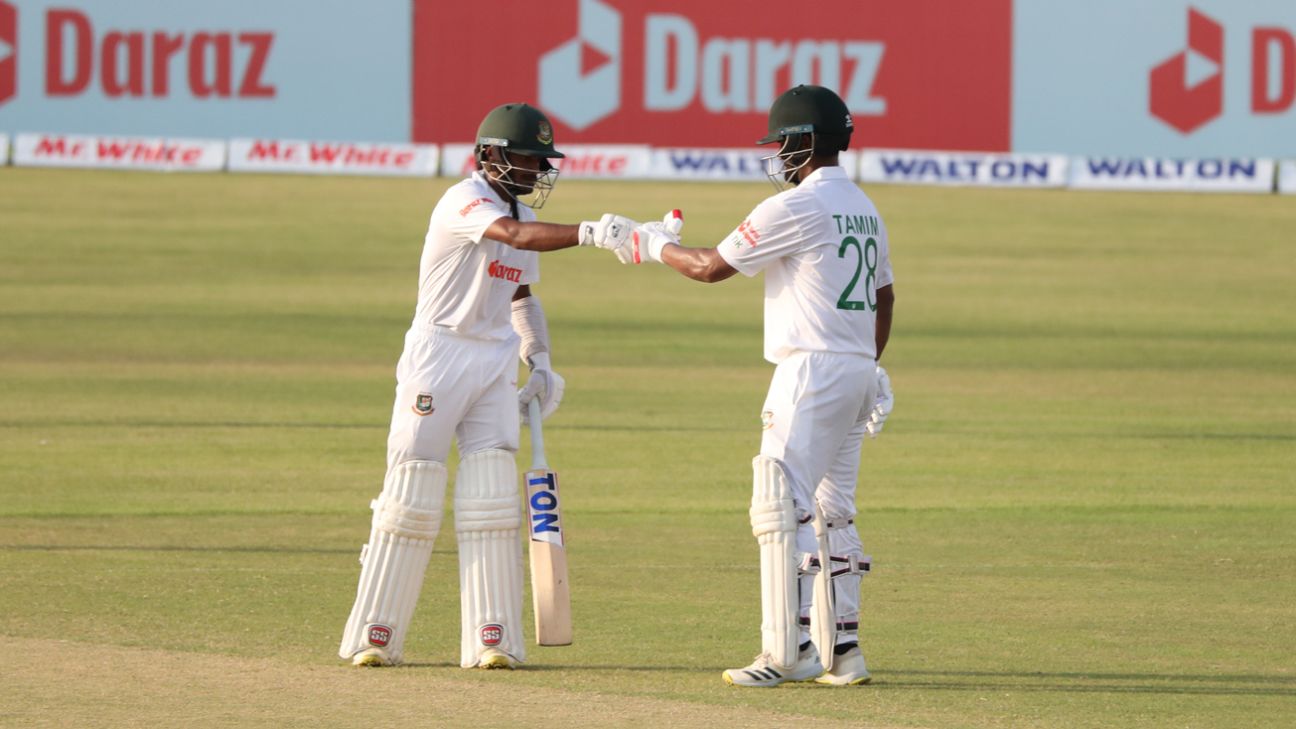 Bangladesh hadn’t crafted an opening partnership in excess of 100 for over five years in Test cricket before this innings. Tamim Iqbal and Mahmudul Hasan Joy made sure to correct that as they laid a solid foundation for Bangladesh to take control of the first Test, in Chattogram. In a near-perfect morning session on the third day of the first Test, Bangladesh went to lunch unscathed on 157 for 0, trailing Sri Lanka by 240 runs. Tamim, closing in on his 10th Test match century returned unbeaten on 89, while Mahmudul looked strong on 58.

Resuming on 76 for 0 on the day, Bangladesh quickly went about their job looking to wipe the deficit. Tamim was his aggressive self from the get-go as he started off his day working Ramesh Mendis, the offspinner, through midwicket for a couple of runs second ball, before clattering pacer Vishwa Fernando for back-to-back fours in the next over.

Tamim soon brought up his 32nd Test half-century by cutting Ramesh Mendis wide of point for a four before celebrating it with another boundary nudged fine down the leg side as the runs came thick and fast for the hosts.

It did not take long for Mahmudul and Tamim to bring up a 100-run stand, their first as an opening pair for Bangladesh. Mahmudul, the more silent partner during the first half an hour of play, got his first couple of boundaries off outside edges down to the third man region. However, he too looked solid as he went about his business with ease. The 21-year-old soon raised his second half-century in just his fifth Test with a flick through midwicket for a brace.

Sri Lanka, on the other hand, were lacklustre with their bowling. They bowled both sides of the wicket and gave away too many boundaries Ramesh bowled a few tight deliveries, only to fritter away the good work with a loose ball in between, while Vishwa lacked the bite. The Bangladesh openers scored 58 runs during the first hour of play, going at more than four runs and over. It did not help that Vishwa, who was hit on the helmet by a Shoriful Islam delivery on the second day, had to be taken out of the Test. Kasun Rajitha, the medium-pacer, came in as a concussion substitute for him.

Asitha Fernando and Dhananjaya de Silva did manage to curb the scoring rate, but both batters looked largely untroubled. de Silva was tight with his wicket-to-wicket lines while Asitha bowled with pace and hit the bat hard. The only time Mahmudul looked in some strife was when Asitha went around the wicket and peppered him with a few bouncers. The opener had a massive slice of luck on 51 when he top-edged a short of a length delivery straight to fine leg, but Lasith Embuldeniya failed to hold on to the catch.

Sri Lanka, largely riding on Angelo Mathews’ 199, were bowled out for 397 on day 2. Mathews batted for close to nine hours in a stellar innings that was picture of grit and patience. He stitched important partnerships, all through but was unlucky to miss out on a double ton by a solitary run. Nayeem Hasan was the star of the show for Bangladesh, picking career-best figures of 6 for 105. Shakib Al Hasan was miserly during his 39-over spell, in which he conceded just 60 runs and picked up three wickets.