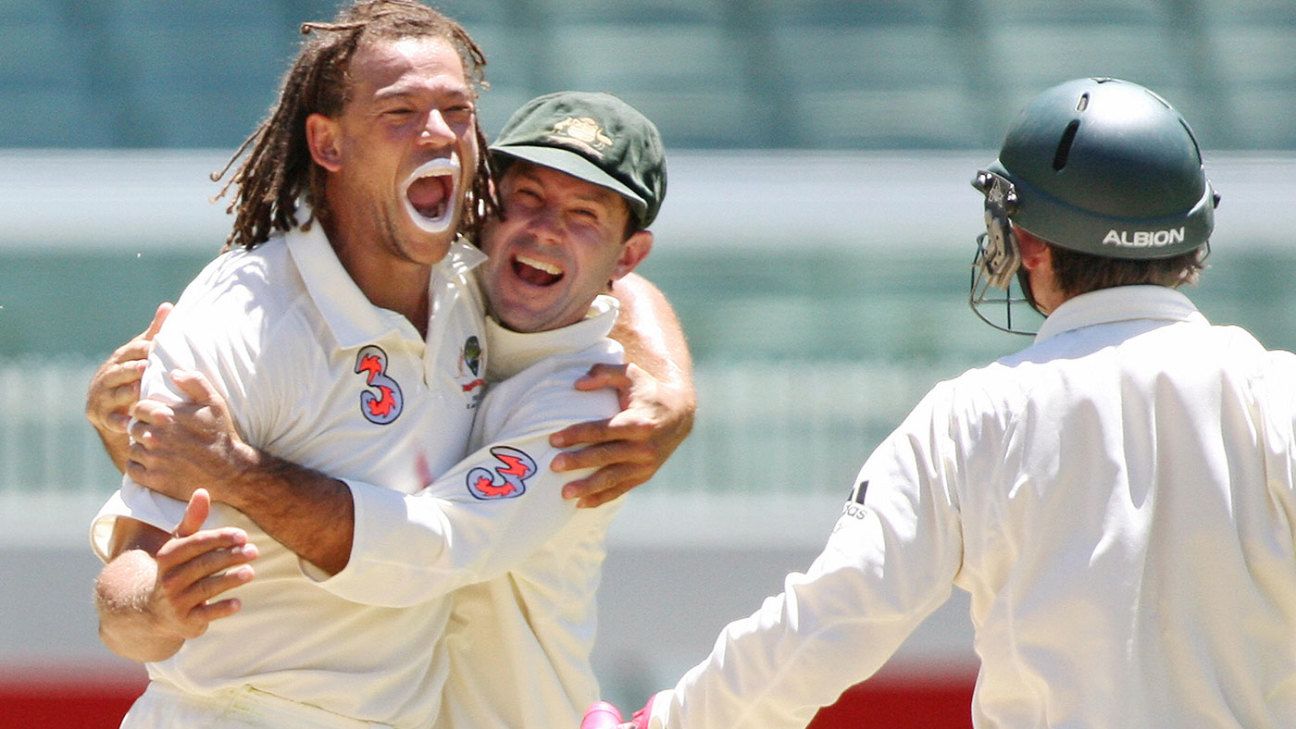 Australia
Share on Facebook
Share on Twitter
Share on Pinterest
Share on LinkedIn
Andrew Symonds‘ former captain, Ricky Ponting, the man who put faith in him ahead of what became a defining 2003 World Cup, has called the allrounder an “extraordinary player” following his death in a car crash at the age of 46.
Symonds was a controversial selection for the tournament in South Africa as he averaged just 23.81 with the bat from 54 ODIs at that point, but Ponting fought hard for his inclusion and in Australia’s opening match against Pakistan he responded with an unbeaten 143 to rescue the team.
Australia would go on to complete an unbeaten campaign with Symonds playing another vital hand in the semi-final against Sri Lanka where he made an undefeated 91 on a tricky pitch.
Symonds died on Sunday when his car left the road and rolled at Hervey Range, about 50km from Townsville.

“If Roy shook your hand you had his word, that’s the sort of bloke he was and that’s why I always wanted him on my team,” Ponting, who is currently coaching at the IPL, tweeted. “An extraordinary player and even better human being. Can’t believe he’s gone. Thoughts are with his family at this time.”

Adam Gilchrist, another long-time team-mate who was also part of the 2003 and 2007 World Cup triumphs with Symonds, said he had a “pure approach” to the sport.

“He was a heart and soul type of guy that just made you happy,” Gilchrist told SEN. “It was the most pure approach to sport from Symmo. It was simple: you play it because you enjoy it, you work hard, and then after it – win, lose or draw – you dust yourself off with your mates, and then you go again.”

Gilchrist reflected on Symonds’ ability to pull Australia out of trouble in one-day cricket and recalled the century at the Wanderers.

“We found ourselves in trouble, Roy went in at 4 for 80 or something and pulled off one of the great hundreds, that was the launch of an undefeated run at a World Cup,” he said. “Without Roy’s innings in that game who knows what happens, he set the tone. That’s probably the innings that really springs to mind for me.”

Alongside being a destructive batter and versatile bowler capable of both medium pace and offspin, Symonds was brilliant in the field with Jonty Rhodes providing a glowing appraisal.

“Arguably the greatest all-round fielder ever,” Rhodes tweeted, “on top of his contribution with both bat [and] ball.”