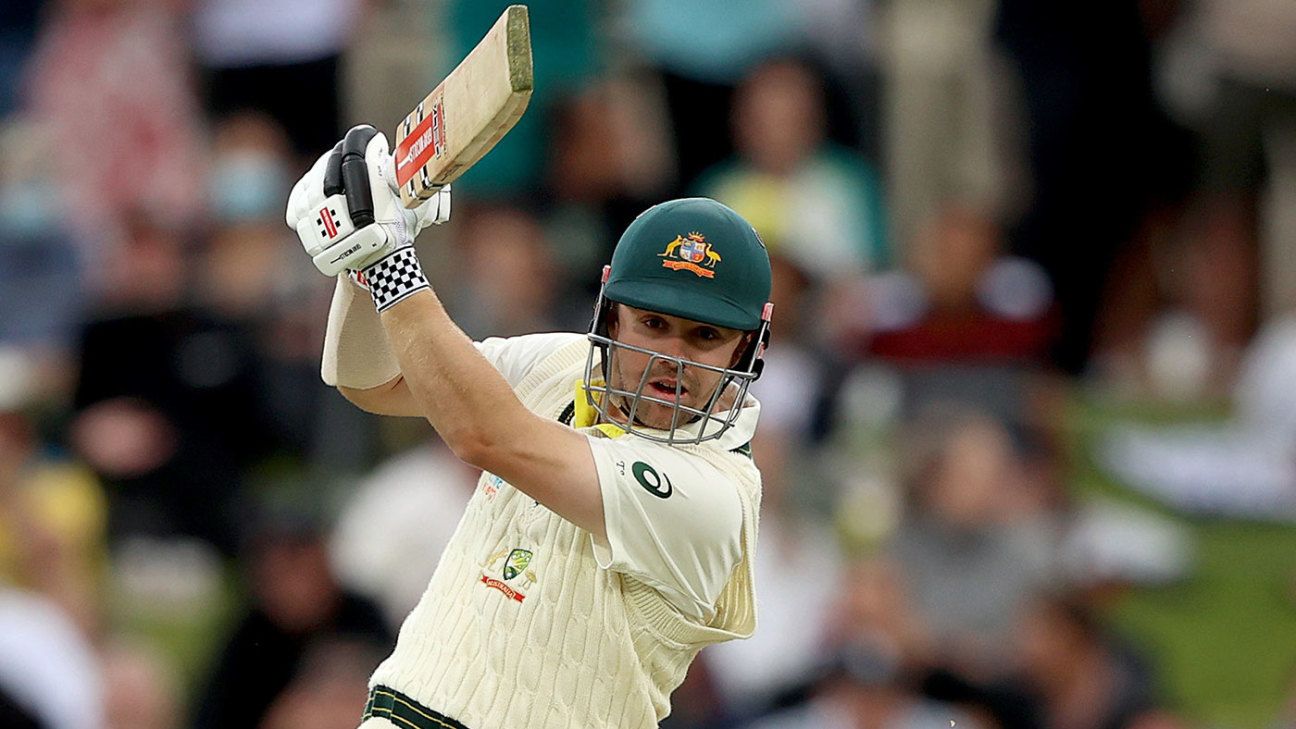 Travis Head, who missed the fourth Ashes Test because of Covid-19, hit 101 in the first innings of the final Test in Hobart, and that helped him continue his spectacular rise in the ICC Test rankings for batters, as he got to the joint-fifth spot in the latest update.
Head’s previous best ranking was tenth, which he reached after scoring 152 in the first Test in Brisbane. Marnus Labuschagne remained the top-ranked batter, having scored 44 and 5 in the final Test, followed by Joe Root, Kane Williamson and Steven Smith, with Head and Rohit Sharma tied at fifth. Smith, in fact, lost a position, slipping below Williamson after a duck and a 27 in Hobart.
Somewhat lower down in the tables, Cameron Green is now at joint 66th – up 23 places – among batters after scoring 74 and 23, and at 62nd – up 13 places – among bowlers, after his four wickets in Hobart. Scott Boland, meanwhile, followed up his spectacular debut in Melbourne with seven wickets in Sydney and four in Hobart, to finish the series at 43rd position among bowlers.
For England, there was good news for some of their bowlers after the 4-0 series defeat. Stuart Broad has moved up two places to 12th position after picking up six wickets in the final Test, Ollie Robinson has gone up one place to 24th, and Mark Wood is up seven places to 31st after a match haul of nine wickets.
The Test series between South Africa and India also ended this week, going 2-1 in favour of the home side. Keegan Petersen shot up 68 places to 33rd after match-winning scores of 72 and 82 in Cape Town. He had started the series at No. 158.
Fast bowlers Kagiso Rabada and Lungi Ngidi also moved up. Rabada was up two places to third after picking up seven wickets in the final Test, and Ngidi was up six places to 21st after picking up four wickets in the match.
For India, Virat Kohli has moved up two places to seventh after scores of 79 and 29 in his last match as Test captain, while Rishabh Pant‘s century in the second innings lifted him ten places to 14th. Jasprit Bumrah‘s six wickets in the match kept him at No. 10 on the bowlers’ table.
Ireland’s 2-1 ODI series win was one of the highlights of the week gone by, and the star of the show for them was Andy McBrine. He was on song with bat and ball, scoring 34*, 35 and 59, and returning 2 for 52, 4 for 36 and 4 for 28. As a result, the offspinner gained 17 slots in the bowlers’ rankings to get to No. 10.
In the Sri Lanka vs Zimbabwe ODI series, which is locked at 1-1 after two games, Sean Williams has moved up eight places to 40th after scores of 100 and 40, and Charith Asalanka has risen 16 places to No. 52 after innings of 71 and 23.
This article was originally published by Espncricinfo.com. Read the original article here.
Share on Facebook
Share on Twitter
Share on Pinterest
Share on LinkedIn