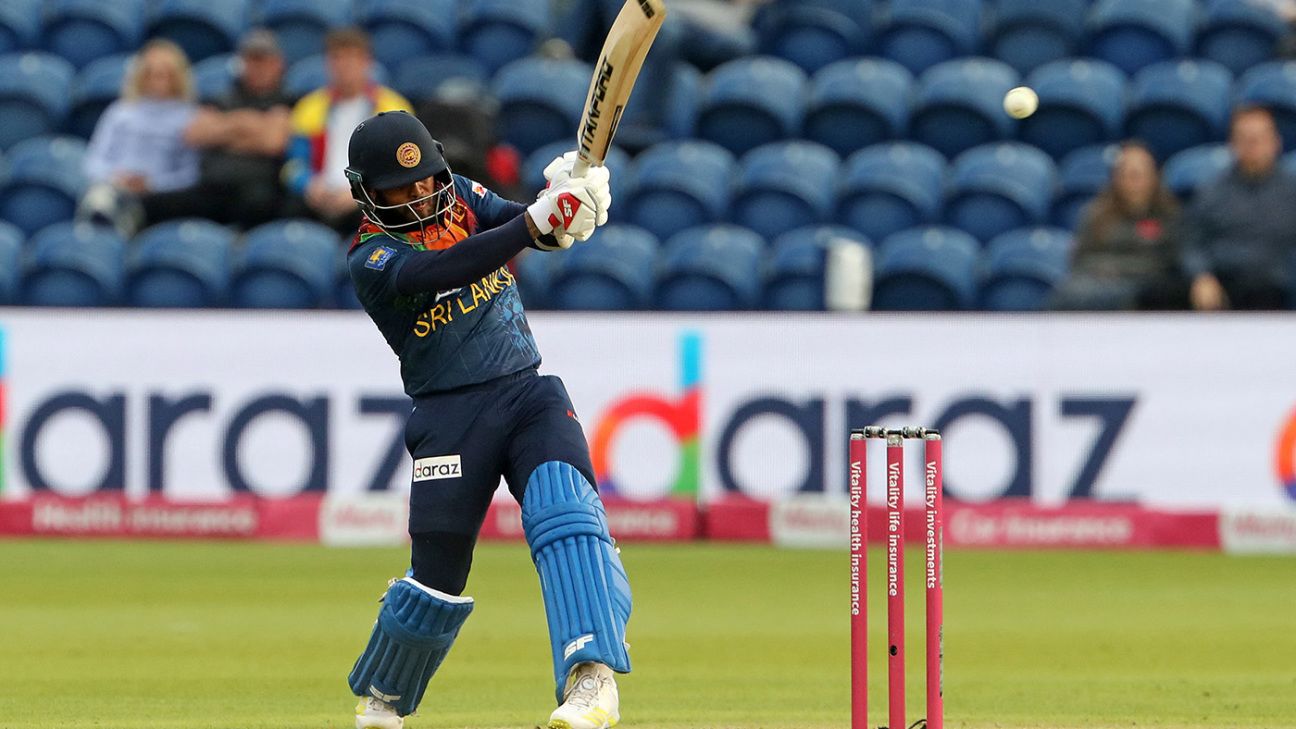 After much chopping and changing, Sri Lanka have finally announced their 17-man squad for the upcoming home ODI series against Zimbabwe, with eight changes from their last outing against South Africa – though even more had originally been slated.

Kusal Perera, Wanindu Hasaranga, Avishka Fernando, Dhananjaya de Silva are the biggest names to miss out – the first two are nursing injuries, the third tested positive for Covid-19, and Dhananjaya is on paternity leave following the birth of his first child. Bhanuka Rajapaksa, meanwhile, ruled himself out of contention following his decision to retire – a decision he has now rescinded. Lahiru Kumara was named in the squad but failed Sri Lanka’s newly beefed-up fitness tests. Pace bowler Binura Fernando and spinner Akila Dananjaya are the other two to miss the cut.

Indeed, Sri Lanka’s selectors had originally planned to go with an even more fresh-faced unit with the uncapped trio of Kalana Perera, Kamil Mishara and Janith Liyanage also included, but the latter two tested positive for Covid-19 while the former fell short of fitness requirements. Of the three, Liyanage will likely be the most disappointed, following a breakout LPL campaign with the Dambulla Giants.

The dropouts meant room opened up for some familiar faces to return with the biggest beneficiaries from the rejigged squad undoubtedly Chandimal and Mendis, both of whom had outstanding LPL campaigns and would have been forgiven for feeling a little hard done to have been omitted in the first place.

While his LPL season brought just the sole half century – an unbeaten 65 in a narrow defeat – only twice in nine LPL innings did Chandimal fail to score less than 25, making him undoubtedly the most consistent force in the tournament. Mendis, meanwhile, ended as the tournament’s highest run-scorer, including a match-winning 53-ball 85 against eventual champions Jaffna Kings in the first Qualifier.
The pair supplement a batting line-up that boasts quite a bit of potential if not international experience, led by the promising young duo of Pathum Nissanka and Charith Asalanka. Lower down, allrounders Chamika Karunaratne, Dasun Shanaka and Ramesh Mendis offer big-hitting prowess, while Minod Bhanuka will likely vie with Chandimal for wicketkeeping duties.
On the bowling front, the pace contingent will be led by the ever-improving Dushmantha Chameera, who finished 2021 as the year’s leading ODI wicket-taker, albeit with the necessary caveat of having played the most matches and the lack of ODI involvement by other Test-playing nations. The veteran Pradeep and uncapped trio of Thushara, Shiran Fernando and Chamika Gunasekera are the other seamers in the squad – though the likes of Shanaka and Karunaratne also offer alternatives.

Pradeep had a decent LPL picking up 10 wickets in largely unfavourable conditions, while Thushara, whose slingy action has unsurprisingly drawn comparisons to Lasith Malinga, showcased his potential in the shortest format, going wicketless just twice in eight games, including a career-best 5 for 13 in the crucial first Qualifier against the Jaffna Kings – he will be keen to test his skills in the 50-over game. Both Fernando and Gunasekera meanwhile have had modest domestic returns but seem to have been picked largely on potential.

It’s in the spin bowling department though that Sri Lanka will feel most light, with the still green Maheesh Theekshana likely to lead the line alongside left-arm spinner Praveen Jayawickrama and the returning Vandersay. Legspinner Vandersay though is in the midst of a career renaissance, set for his first ODI since 2019 following an impressive LPL; having had to wait till halfway through to tournament to get any game time for the Colombo Stars he ended it with 11 wickets in four games, including a career-best haul of 6 for 25. There are also the part-time options afforded by Ramesh and Kamindu Mendis, with the former having showed signs of taking his game up a notch in the recently concluded Test series against the West Indies.