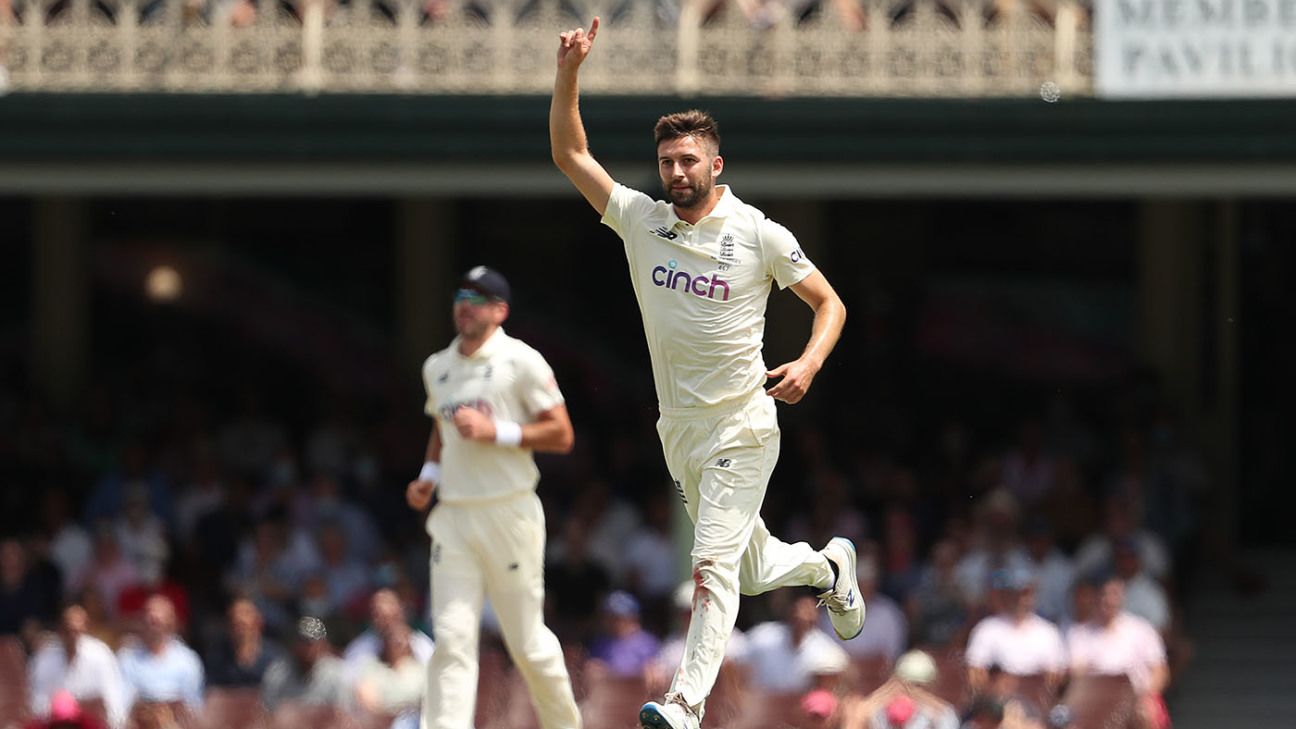 England
Share on Facebook
Share on Twitter
Share on Pinterest
Share on LinkedIn
Mark Wood insists he does not see his recent successes against Marnus Labuschagne as a moral victory “because we have been getting battered”, but hopes that a green pitch at Hobart could offer one last opportunity for England to go out on a high at the end of a tough Ashes campaign.

Wood, who turned 32 this week, has dismissed Labuschagne three times in 52 balls in the series, and has earned plaudits for his wholehearted displays at Brisbane, Melbourne and Sydney, where he has consistently bowled in excess of 90mph.

However, he goes into the Hobart Test with just eight wickets at 37.62 to show for his efforts, and with England already 3-0 down in the series after losing the Ashes in 12 days of action, he is desperate to get some validation for his displays in the form of “wins and wickets”.

“Personally, I feel pleased with my efforts but when you’re playing for England, effort should be should be given,” Wood said. “It’s non-negotiable. You should be giving everything you’ve got, every time, and I’ve tried to give 100%. I would like more wickets in the end column but, especially in the first innings at Sydney where I only picked up one wicket, I felt I bowled really well.”

It would be an achievement in itself for Wood to play at Hobart given his prior injury record, in which he has often struggled to back up his uncompromising displays for two Tests in a row, let alone three. But having adopted a longer, smoother run-up in recent years, compared to the sprinter’s-blocks-style approach of his early career, Wood believes he’s taken much of the strain off his body, and hopes a strong finish to the series can finally assuage the lingering doubts about his durability.

“Maybe it has proved things wrong but, at the same time, I understand why people would think that when you look at my record,” Wood said. “But since I’ve changed my run-up, things have been different. As a fast bowler, you’re probably never 100% and you carry niggles, but I’m really pleased with how I’ve stood up in terms of injuries, and the medical team have been fantastic with me.

“I look forward to trying to play four games out of five. This is one last big push for me to try and keep my speeds up and offer that to the team. It’s all well and good playing the games, but it’s wins and wickets I’m after, so that’s my priority.”

Without the likes of Jofra Archer and Olly Stone to back up his 90mph methods, Wood admits he has been England’s only remaining “point of difference” in this series.

“I’ve actually enjoyed that responsibility of having to keep charging in, doing that side of things for the team,” he said. “I have kept my paces up, but not got the wickets I really wanted. Now I have another chance in this game to put something in the right column at the end.”

The continuation of his recent run of success against Labuschagne, currently the ICC’s No.1-ranked Test batter, would help England’s cause no end. Having not been dismissed for less than 47 in 14 consecutive first-innings since his Test recall during the 2019 Ashes, Labuschagne fell for 1 and 28 in Australia’s first innings at Melbourne and Sydney, then again for 29 in the second innings at the SCG, as Wood’s raw pace exposed him on each occasion.

Nevertheless, after twin scores of 103 and 51 in the Adelaide victory, and a crucial 74 in the first innings at Brisbane, Wood acknowledged that Labuschagne was still a major part of an Australia team that has dominated the critical moments of the series.

“It would be a moral victory if he was getting out and we were winning, but he’s still contributing to them winning,” Wood said. “They’re still getting more scores than we are and we’re still not bowling them out, so it’s important that we turn that around.

“I noticed he was changing his technique [in the second innings],” Wood said. “His back foot was coming across more, opening himself up a little bit [because] I was trying to be wide on the crease. Luckily I got him again but it wasn’t the greatest ball, it bounced a bit on him, and might have hit a crack.

“But he’s one hell of a player, so I’m just pleased to get top players out like him. We know we need to try and capitalise on the first 20 balls of an innings, and really put them under pressure there, because if he gets in, he does a lot of damage.

“I’ve played games against Marnus where he’s getting the better of me so I don’t see it as a huge thing in my mind. But I want to raise my game and prove myself against the best players. It’s always special when you get a big wicket like [Steven] Smith or [David] Warner or Labuschagne, these are top, top players.”

England’s team for the final Test could feature as many as five changes from the side that drew at Sydney last week, with Rory Burns expected to return in place of the out-of-form Haseeb Hameed, and Jos Buttler already heading home after suffering a broken finger while keeping wicket on the second day. Ben Stokes (side strain) and Jonny Bairstow (cracked thumb) are also doubts, but Wood insisted that England’s walking wounded would do their utmost to be ready for the contest.

“They’re in good spirits so far, and both of them are pretty obvious characters to tell if they’re not,” he said. “They’ve seemed happy and they’ve trained as normal, and they are two characters that don’t give up easy, so we’ll just have to see how they train tonight.”

The Hobart Test is likely to be Wood’s final slice of Ashes action in Australia, but he and his white-ball colleagues are due to return Down Under next winter for another shot at the T20 World Cup, and he said that the memories of this tour would be a driving force come that campaign.

“I certainly don’t want to feel like I’ve done in this series,” he said. “When you’re disappointed, sat in the dressing room, it’s not a nice place to be. When we come out here for the T20 World Cup, we’ll be coming out here to win, and we’re here to win in this last Test match as well. We haven’t performed very well on this trip, but this gives us a chance to show some fight, and some character, and stand up for England.”