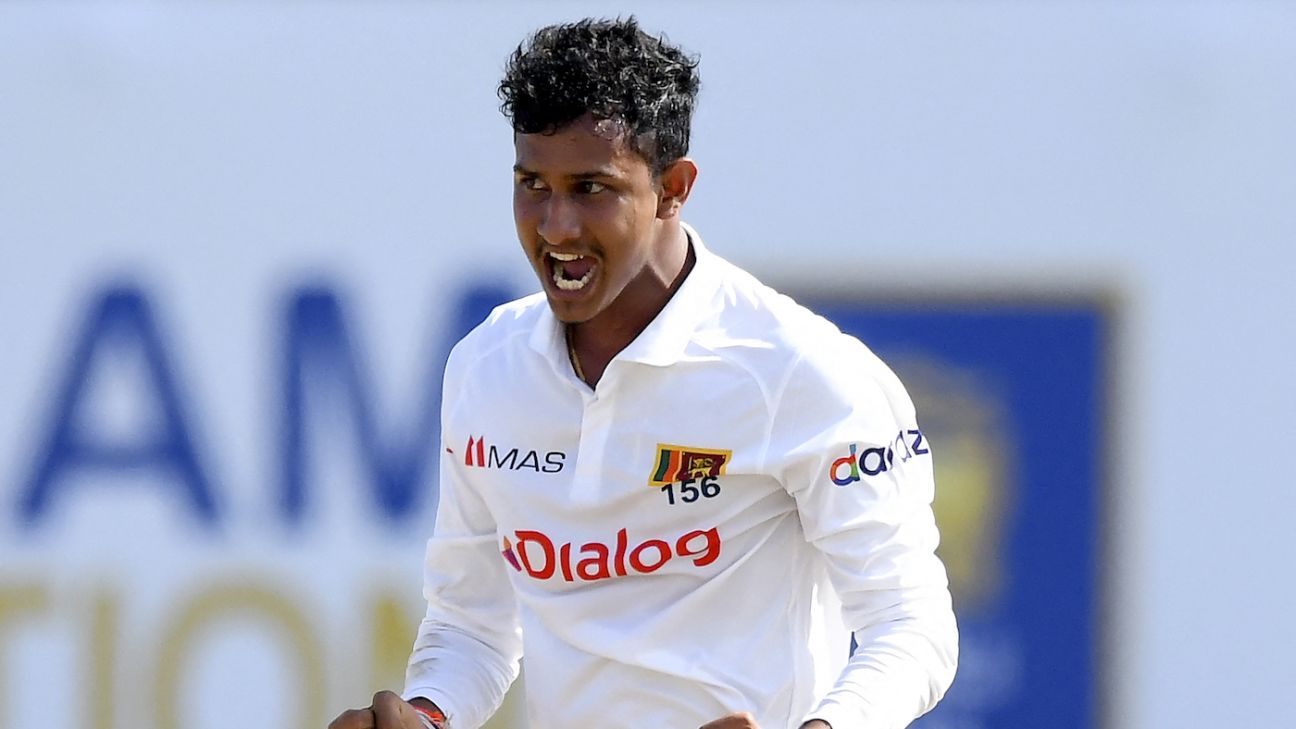 Sri Lanka’s young trio of frontline spinners has taken seven wickets between them and seemingly put the team in a strong position in the opening Test against West Indies. But spin-bowling coach Piyal Wijetunge thinks they could have done much better.

But on a pitch that offered substantial assistance, Wijetunge thought his bowlers were somewhat overeager.

“I’m not 100% happy – we could have done much better. We have been missing lines and lengths very frequently,” Wijetunge said of the performance. “We’ve got three young spinners, and on this pitch, which turns a lot, I think we were trying too hard to get wickets. We need to have patience, because the pitch does help us.

“Instead of bowling the ball in one spot and waiting for the pitch to do the work, we went hunting for wickets. We tried too many things. But of these three spinners, Lasith Embuldeniya has played 12 [11] Tests, Praveen Jayawickrama has played two [one], and Ramesh Mendis three [two]. They need to keep building on their consistency.”

However, Wijetunge did believe that Sri Lanka’s spin bowling was generally in a good place, with these three spinners around for the Test format, and others coming through the system. Sri Lanka are fielding two frontline left-arm spinners for the first time since the retirement of Rangana Herath (he had occasionally played alongside Malinda Warnapura late in his career). Wijetunge outlined Embuldeniya and Jayawickrama’s contrasting strengths.

“Lasith Embuldeniya is a conventional type left-arm spinner, and of the three who are playing this game, he’s the most consistent in terms of his skill.

“Praveen took 11 wickets on debut, and on this Galle pitch we would anyway consider him. He’s got natural variation, with the seam angles he uses. The ball straightens and when it hits the seam, it spins more than [it does] for the others. When they have exposure and experience, they are definitely going to be matchwinners.”

Where Jayawickrama, in particular, has a decent straighter ball, but Embuldeniya has not yet developed a good version of that variation – something that was obvious during England’s tour of Sri Lanka in January. Where Emuldeniya and Wijetunge might have ordinarily worked on developing a straighter delivery through the course of the year, this has not been possible in 2021.

“The one that comes in [to the right-hander] is definitely one that we have to work on with Embuldeniya. But with Covid-19 and the protocols around it, it has been difficult to work in new skills. We get bubbled a maximum of two weeks before the series, and the only thing we can do as coaches then is to get the players game-ready.

“Before this, we had off-season training at the high performance centre, where we could have developed variations, or worked on consistency. But we haven’t had that chance, and there are only five or six skill-training sessions per series.”