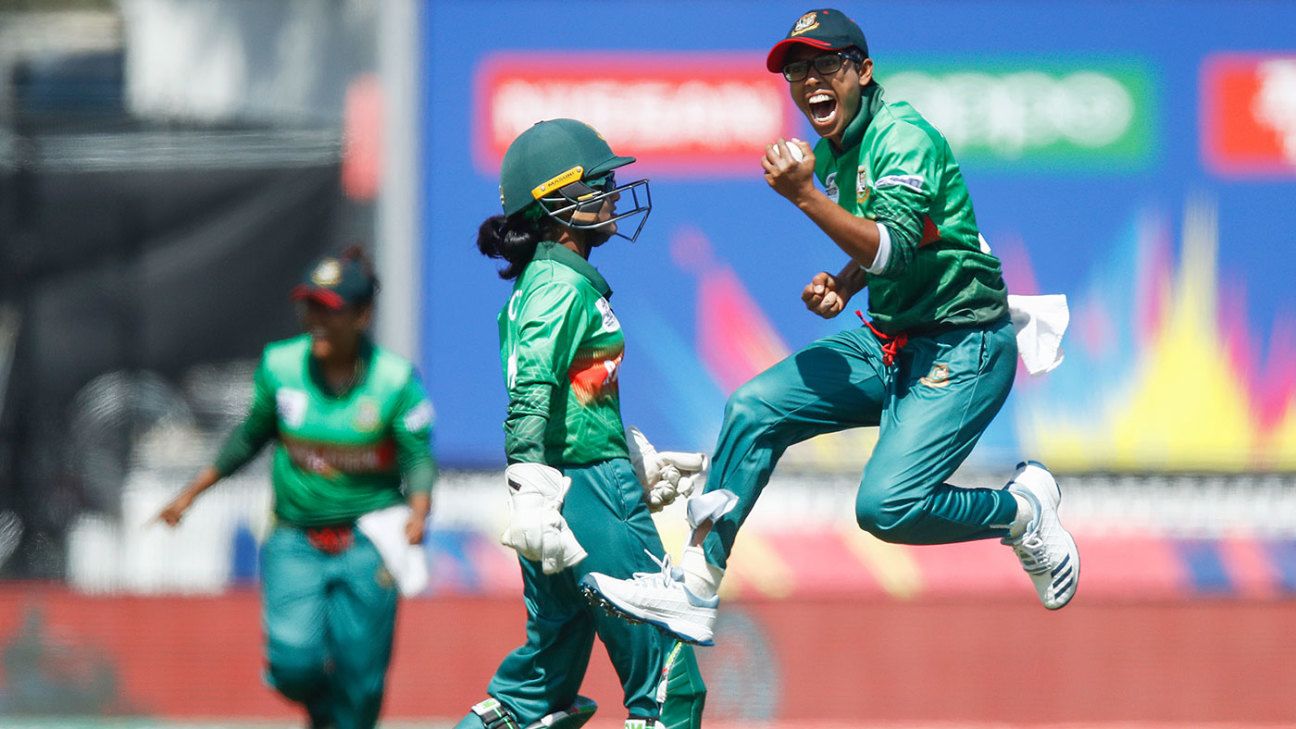 Sharmin Akhter‘s unbeaten 130 helped Bangladesh retain their position atop the Women’s ODI World Cup Qualifier Group B table after handing USA Women a 270-run drubbing.
After being put in, Akhter strung a 96-run opening stand with left-hand batter Murshida Khatun (47) and a 137-run partnership for the third wicket with Fargana Hoque (67).

Akhter brought up her hundred off 117 balls and struck 11 fours during her 141-ball stay. But given the matches featuring at least one team without ODI status are accorded only List A status, Akhter’s ton wouldn’t count towards her ODI record.

USA’s meek reply saw only their captain-wicketkeeper Sindhu Sriharsha (15) and No. 7 Tara Norris (16), the Philadelphia-born allrounder who was one of the breakout performers on the English domestic circuit this season, reach the double figures.

Rain halted play after 15 overs when USA were 25 for 4 after 15 overs. But their slide continued after the resumption as the Bangladesh attack kept chipping away, making use of the yorker to good effect. Salma Khatun, Rumana Ahmed and Fahima Khatun picked up two wickets apiece for Bangladesh, and with Uzma Iftikhar absent hurt, USA folded for 52 in 30.3 overs.

For just a little while, a five-wicket haul from 17-year old Thipatcha Putthawong threatened an upset. Thailand bowled Pakistan out for 145 on the back of a field day for the left-arm spinner, but they were unable to capitalise as an experienced bowling unit rallied hard to secure victory.
With only Javeria Khan (38) and Aliya Riaz (49) making a noteworthy contribution, it was left to Nida Dar and company to salvage the game and they did not disappoint. Each of the six bowlers Pakistan used picked up a wicket, with Anam Amin and Nashra Sandhu completing 19 overs for just 27 runs, as Thailand were knocked out for 93.

A stifling bowling performance, led by Anisa Mohammed and Hayley Matthews, set West Indies on the path to victory over Ireland in Harare. The two spinners combined to pick up five wickets and give up only 60 runs in 20 overs. Ireland, bowled out for 159 in 43 overs, were unable to have the same kind of impact on the West Indies batters with Deandra Dottin in free-flowing form. The opener scored nearly half the runs her team needed for the win – 73 – as a one-sided contest came to an end with six wickets and 63 balls to spare.
This article was originally published by Espncricinfo.com. Read the original article here.
Share on Facebook
Share on Twitter
Share on Pinterest
Share on LinkedIn