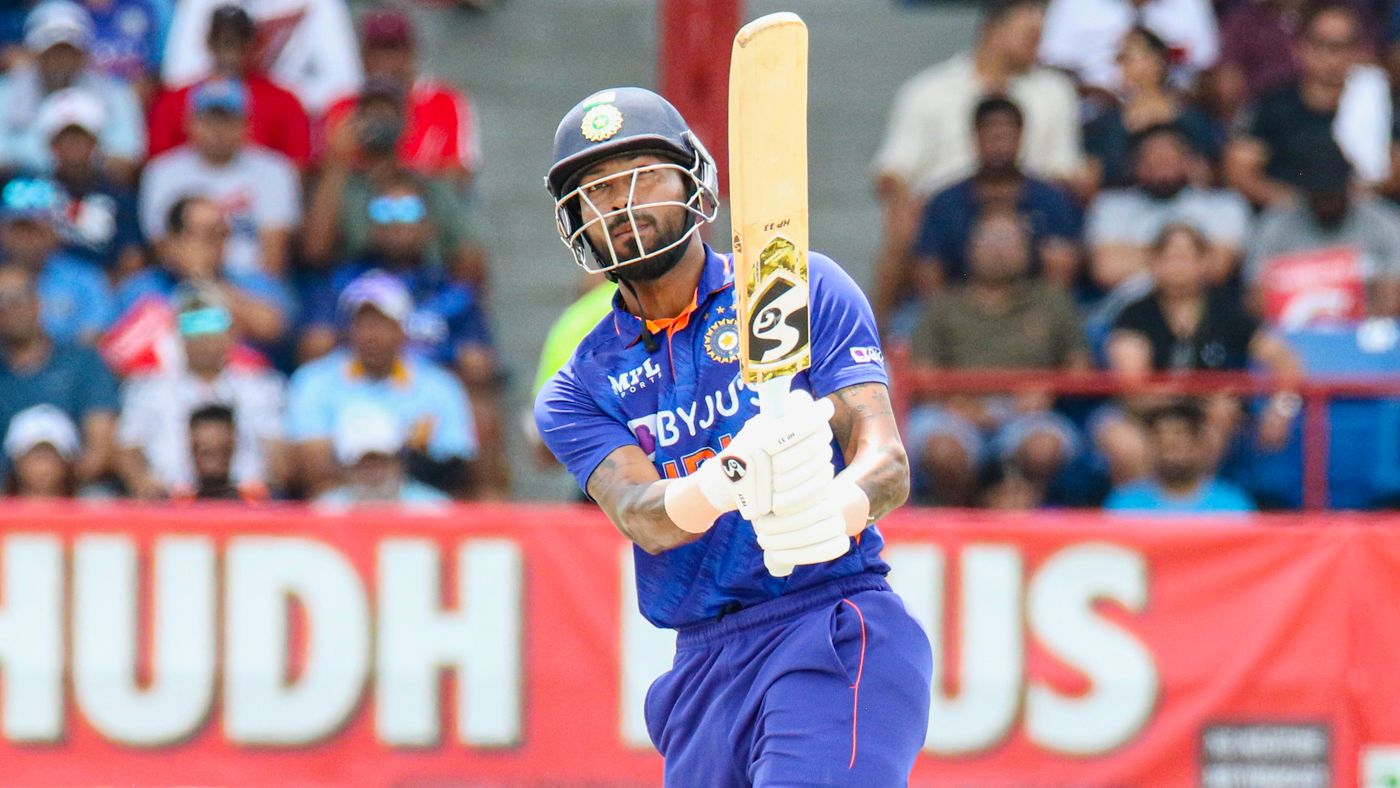 India
Share on Facebook
Share on Twitter
Share on Pinterest
Share on LinkedIn
Having captained Gujarat Titans to IPL glory in their first season and led India to three wins in as many T20Is in a stand-in capacity, allrounder Hardik Pandya is open to a full-time leadership role in the future.
“Yeah! why not? If I get an opportunity in the future, I’ll be more than happy to do that, but right now we have the World Cup, and we have the Asia Cup [coming up],” Hardik said after India clinched a 4-1 series victory over West Indies at Lauderhill in Florida. “We’re going to focus on that and make sure as a team what we’re doing, we continue [with that] and make sure that all the skillsets, which we are learning we can keep getting better at it, and at the same point of time enjoy the game as well.
Hardik took over captaincy in the absence of Rohit Sharma, who had been rested for Sunday’s game and oversaw an 88-run victory – India’s joint fourth-biggest, in terms of runs in T20Is.
India have used as many as seven captains across formats this year. More recently, ahead of the tour to the West Indies and the USA, Hardik replaced Rishabh Pant as India’s T20I vice-captain. Rohit is enthused by the growth of multiple leaders in the group.

“I know it’s very exciting to create so many leaders around the team because it’s always a good sign,” Rohit told Star Sports’ Follow the Blues show. “And you want the guys to handle the pressure, who understand the game and know each other really well. And when they are leading the team, all these things can happen.

“I think it’s very important to have that leadership, but obviously, we play the IPL, and it’s a ten-team tournament. So, there will be ten captains who at some stage will be a part of the Indian team as well. I think it’s fantastic because honestly, my job is much lesser as these guys understand everything pretty well. So, it’s just about if someone’s having a thought, how am I going to back that up. For me as captain that is my role and that is what I’m trying to do.”

India have now won six of their last seven T20I series – the one against South Africa was shared after rain washed out the decider in Bengaluru in June – since the 2021 T20 World Cup. Hardik attributed India’s consistency to the rich talent pool and the security given to the players by the team management, echoing Dinesh Karthik’s comments.

“I think [it’s] the kind of talent that all the players have and the kind of freedom we’re getting now. This is the new India with the way they’re playing. I can see a lot of people playing with freedom, I can see a lot of people expressing themselves and not worrying about the result, which makes us more dangerous as a group. When you don’t have anything to lose, you kind of go out there and do something special.

“The credit goes to the management and the guys and the whole group to kind of make sure we create the environment where the players go and kind of enjoy and make sure they’re just giving their best – without being worried about whether they’re going to get picked or dropped. That adds more value and makes us more dangerous.”

“Preparation-wise or the environment-wise, we are 100% ready, but in this sport, I feel you don’t stop learning”

Sunday’s game was the first instance of spinners taking all ten wickets in a men’s T20I. With West Indies clubbing their right-hand batters together at the top in the absence of the rested Kyle Mayers, Hardik tossed the new ball to Axar Patel, who got another game ahead of Ravindra Jadeja, and responded with the wickets of West Indies’ makeshift top three inside the powerplay. Wristspinners Kuldeep Yadav and Ravi Bishnoi then shared the rest of the seven wickets between them as the hosts folded for 100 while chasing 189.

“I wanted to make sure I gave Axar the new ball, and I wanted him to kind of get the confidence back and bowl some tight overs,” Hardik said. “At the same point in time, I know the kind of bowler he is. When he bowls a couple of tight overs, he creates chances, and the wristspinners have some weapons where the batters kind of find them difficult to pick. So, it was not pre-planned, but obviously, the wicket and the batters showed us that spin is going to be a big factor. They kept taking wickets, I didn’t have to do much; I just had to hand over the ball and let them enjoy.”

India’s next T20I assignment is the Asia Cup starting on August 27 in the UAE. The India squad for that tournament could pretty much be the one for the 2022 T20 World Cup in Australia for which India are ready, according to Hardik.

“It’s just about how we can keep getting better,” Hardik said. “I think preparation-wise or the environment-wise, we are 100% ready, but in this sport, I feel you don’t stop learning. So for us, yes, we are ready, but at the same time if we make sure we keep learning and make sure whenever the opportunity comes, we rise to the occasion and enjoy as many games we can win for the country.”