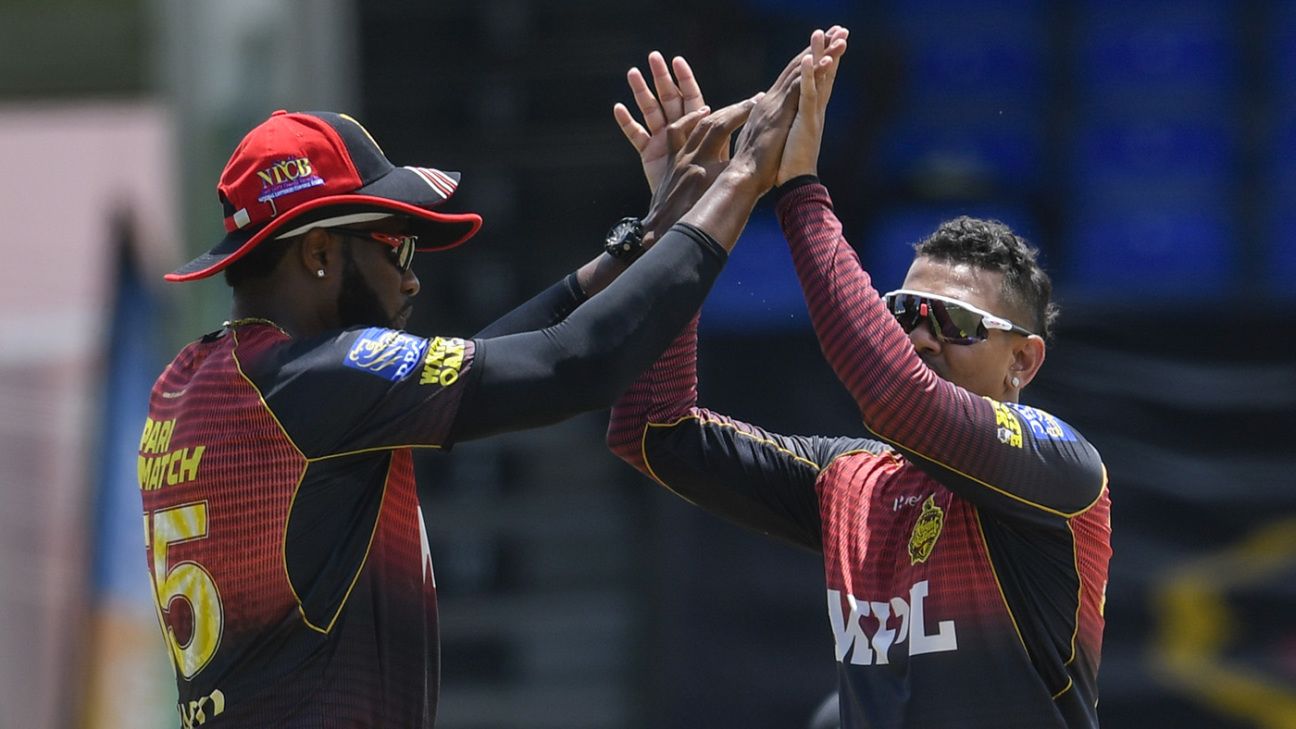 West Indies
Share on Facebook
Share on Twitter
Share on Pinterest
Share on LinkedIn
Kieron Pollard will play county cricket for the first time in more than a decade this summer after signing for Surrey for the Vitality Blast, where he will link up with his close friend and compatriot Sunil Narine.
ESPNcricinfo revealed last month that Pollard had been approached by multiple counties after his international retirement to discuss the possibility of him playing in the Blast and that Surrey were front-runners after Sean Abbott‘s involvement on Australia’s tour to Sri Lanka forced him to pull out of his deal.
Surrey confirmed the signing on Friday and Pollard is expected to make his debut in their second home game of the T20 season against Gloucestershire at the Kia Oval on May 31. It will be his first appearance in county cricket since 2011, when his Somerset side were beaten by Leicestershire in the final; he was due to play for Northamptonshire in 2020 but his deal was cancelled due to the Covid-19 pandemic.

“It has been quite some time since I’ve played county cricket and I’m thrilled to be returning to the Vitality Blast competition in Surrey colours this year,” Pollard said in a Surrey press release. “The Kia Oval is a special place to play, especially in front of a full house.”

Surrey have not won the Blast since its inaugural season in 2003 and failed to qualify for the knockout stages last year but are among the favourites for the title this season.

They are likely to be without several England players – including Sam and Tom Curran, Ollie Pope, Ben Foakes, Jason Roy and Reece Topley – at various stages due to the Test and ODI series against New Zealand and the Netherlands respectively, but securing Pollard and Narine for the majority of the season represents a significant boost to their hopes.

Pollard and Narine have only played a handful of games together on English soil, most recently a one-off T20I at Chester-le-Street in 2017, but will resume their hugely successful partnership at the Kia Oval. They have previously played together for West Indies, Trinidad and Tobago, Dhaka Dynamites in the BPL and Trinbago Knight Riders in the CPL.

“We’re very pleased to bring Kieron to the club,” Alec Stewart, Surrey’s director of cricket, said. “He brings an incredible range of skills as well as experience at the very highest level of the sport. His all-round ability will make a significant difference to the depth of the squad.”

“This Surrey side is full of talent and should certainly be mounting a challenge for the title,” Pollard added. “I hope that my experience will add a vital ingredient to the club’s success this year.”

Pollard has had a quiet season for Mumbai Indians in the ongoing IPL season, with 144 runs across 11 innings at a strike rate of just 107.46. He announced his decision to retire from international cricket and give up the West Indies white-ball captaincy midway through the tournament and has struggled with the demands of stringent Covid protocols in India, writing on Instagram last week: “bubble life isn’t easy”.
Despite his lean run, Pollard remains one of the world’s most sought-after T20 players as a highly-experienced finisher, occasional bowler and leader. He will also offer support to Chris Jordan, Surrey’s new T20 captain, with whom he has played at Adelaide Strikers, Peshawar Zalmi and Trinbago.
The move means Pollard will spend the majority of the English summer living in London. At last month’s Hundred draft, Pollard was the top pick for London Spirit and is expected to be available for the majority of the season before flying back to the Caribbean late in the group stages to play in the CPL.
This article was originally published by Espncricinfo.com. Read the original article here.
Share on Facebook
Share on Twitter
Share on Pinterest
Share on LinkedIn

Watch: Shikhar Dhawan’s Dance With Ishan Kishan, Shubman Gill Will Crack You Up
CSK old boys du Plessis and Fleming to be Jo’burg Super Kings’ captain and coach, respectively
New Zealand A to tour India in August-September; Australia A may visit in November
Ben Stokes not going back to the drawing board as England return to Test arena
Shahbaz Ahmed replaces injured Washington Sundar for Zimbabwe tour