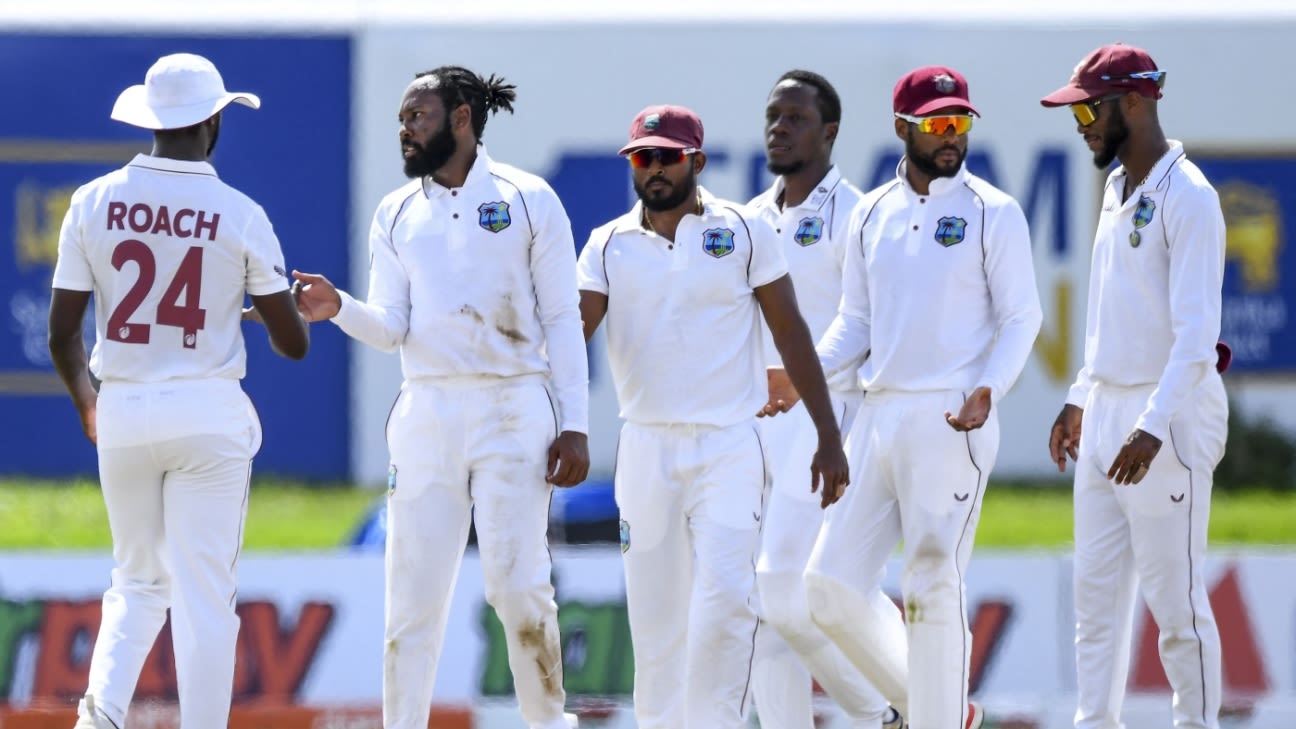 Veerasammy Permaul removed Charith Asalanka in an otherwise quiet first hour, Pathum Nissanka and Dhananjaya de Silva then put on 78 for the third wicket, before Roston Chase struck with the last ball before lunch to yank West Indies back into a a good position, trapping Nissanka lbw for 66.

On a track on which 200 may pose a challenge in the final innings, Sri Lanka are now 102 ahead, with six wickets in hand. One of those batters is the injured Angelo Mathews, who is unlikely to be able to run between wickets. Although the old ball was not doing much for West Indies – the spinners largely failing to get it to bite, and Kemar Roach getting only modest reverse swing – the last act of the session will buoy West Indies, who still have to delivery 22 overs before the second new ball is available.

Sri Lanka’s innings had been held together by opener Nissanka, and until the final ball, he had continued with the same solidity he had displayed late on day three. He was rarely beaten, even by the occasional big-turning delivery. He swept occasionally, and played the cut when bowlers pitched short. It was his drives and flicks that were particularly productive as he coasted in accumulation mode, however.

He hit three fours in the session – an off-drive off Chase, a sweep off Permaul, and a flick to fine leg off Jason Holder. There was barely a mistake save for the fatal one. He will perhaps rue that he went back to that delivery, which straightened off the pitch (Chase was coming around the wicket), and was projected to hit the very top of middle stump.

Still, he completed his third half-century of the series in this session, opening the batting at the Test level for the first time. He finished with 66 off 154 in this innings, and 198 for the series.

De Silva, meanwhile, was more keen to take the bowling on, particularly when West Indies introduced Roach in order to tempt him into a dangerous hook shot – a strategy that had brought them some success when these teams played in the Caribbean earlier this year. On a track not offering much zip for the quicks, de Silva was able to get on top of the bounce, and play the pull and hook shot safely. He even hooked roach twice through the arc between fine leg and deep midwicket, off consecutive deliveries in the 51st over.

Against spin, he wasn’t quite as secure as Nissanka. He was dropped on five off the bowling of Permaul, the edge traveling quickly and low into the gloves of Joshua da Silva, who could not hold on to the tough chance. Where Nissanka’s runs came all around the wicket, de Silva favoured the square region on the leg side – 26 of his 45 runs coming there.

Asalanka began the day on four, and lasted 55 balls, before a Permaul delivery caught his inside edge as he pushed his bat in front of his pad – the edge popping up to short leg. He was out for 19. Sri Lanka had essentially been 24 for 3 at that stage, before the Nissanka-de Silva stand steadied their innings somewhat.

Sri Lanka stun Australia after Wellalage heroics
Harris dropped, Khawaja to open in Hobart after his twin hundreds
Pakistan Under-13 and Under-16 tournaments suspended over age fraud
Rahul will open in ODIs against South Africa, Venkatesh Iyer to audition as fast-bowling allrounder
Kagiso Rabada withdrawn from South Africa ODI squad to face India to manage workload