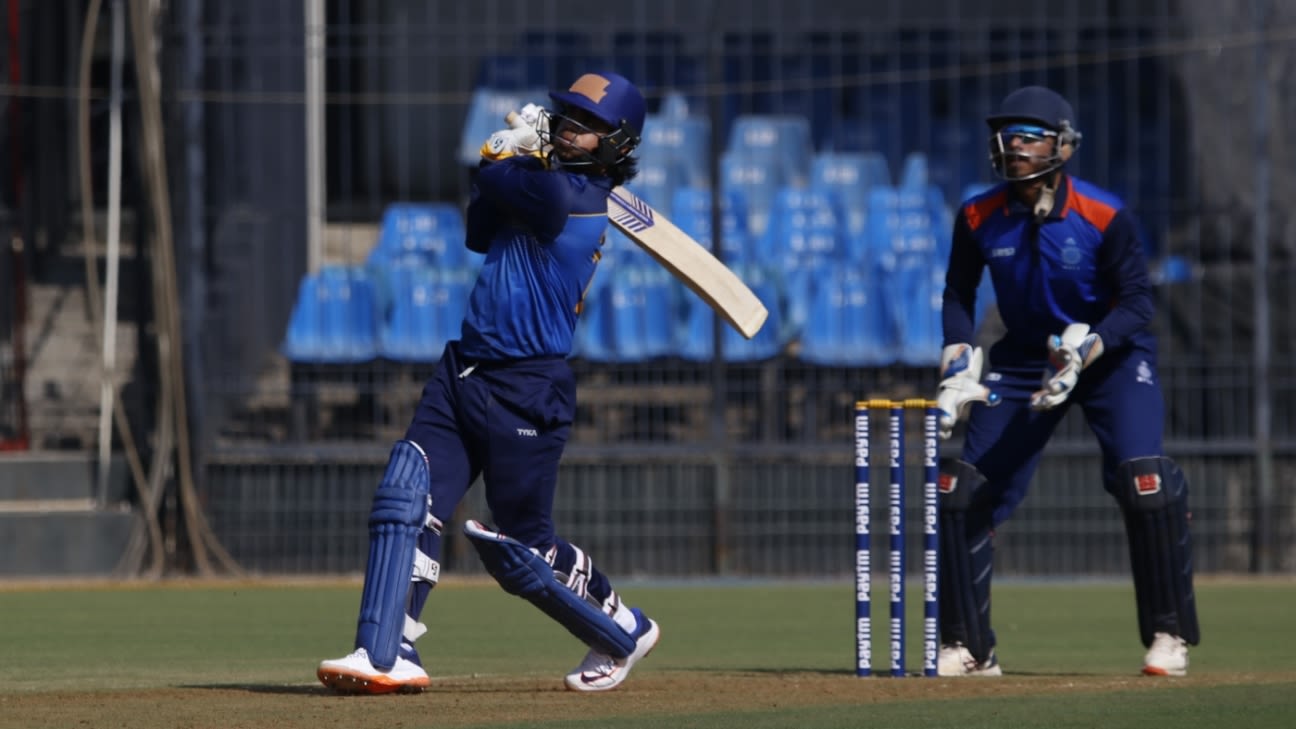 Mumbai, Saurashtra, Uttar Pradesh, and Kerala have filled up the last four automatic qualification spots for the quarter-final stage of the Vijay Hazare Trophy. They join Gujarat, Andhra, and Karnataka, who had sealed qualification on Sunday by topping their respective groups. The eighth quarter-finalist will be decided by a playoff between Delhi, who finished eighth on the combined Elite division points table, and Uttarakhand, who finished as toppers of the Plate group.

This season’s format has the top-placed teams of the five Elite division groups qualifying automatically, alongside the top two teams on points from a combined Elite division table. Mumbai won their last Group D game by 200 runs against Himachal Pradesh to finish top with five wins in five games, while Saurashtra stayed on top of Group E with 16 points despite their first loss of the season to Services.

For the other two automatic qualification spots, the teams in contention were UP and Kerala (both from Group C with 16 points), Baroda (Group A, 16 points) and Delhi (Group D, 16 points). Baroda lost out to Delhi on net run-rate, while UP’s and Kerala’s vastly superior NRRs ensured they qualified as the sixth- and seventh-placed teams.

The Plate division, which plays as one group, had two teams – Uttarakhand and Assam – finish with five wins in five games. But Uttarakhand’s NRR in excess of +3 was far too much for Assam to better on the final day of the league stage. As a result, it will be Uttarakhand who play Delhi for the last quarter-final spot.

Mumbai began the day all-but-qualified, on 16 points with an NRR boosted by their explosiveness against Puducherry last week. They fell to 49 for 4 against HP after electing to bat and it took three of their most senior players – Suryakumar Yadav (91 off 75), Aditya Tare (83 off 98) and Shardul Thakur (92 off 57) – to not only rescue them but put them far beyond the reach of HP, who folded for 121 in a chase of 322. Legspinner Prashant Solanki, in his debut season for the Mumbai senior team, took 4 for 32 to take his tally to 11 wickets in three matches. Left-arm spinner Shams Mulani took 3 for 42, including the wicket that ended the game.

Delhi‘s bowlers arrested Rajasthan‘s charge in the slog overs and bowled them out for 294, before an unbeaten 117 from Himmat Singh, and his unbroken 183-run stand with Nitish Rana (88 off 75) helped them win by eight wickets with more than five overs to spare. Rajasthan had been on course for bigger runs on the back of Manender Singh‘s 73 and Arjit Gupta‘s 51-ball 78 before Simarjeet Singh (4 for 36) and Pradeep Sangwan (3 for 62) intervened.

In the only other Group D match, Maharashtra‘s Yash Nahar made 119 to end his maiden List A season with 390 runs in five matches. That knock in a big partnership with Ankit Bawne, who made 110, and Rahul Tripathi‘s 30-ball 59, combined to help Maharasthra put up 333 for 4 and win by 137 runs. Kedar Jadhav bowled a 10-over spell that went for 34 and got him two wickets.

A career-best 158 for Rahul Singh Gahlaut helped Services pick up their second win of the season, and upset of table-toppers Saurashtra. After being put in and falling to 26 for 4, it took a 182-run stand between Gahlaut and wicketkeeper Devender Lochab (64 off 86) to lift Services past 200. They scored at more than ten an over in the last eight overs, a 21-ball 43 from former Delhi allrounder Pulkit Narang helping them get to 301 for 7. Saurashtra’s middle order collapsed in chase, courtesy of left-arm spinner Rahul Khajan Singh‘s 4 for 45, and medium-pacer Varun Choudhary‘s 3 for 62. They fell short by 68 runs with about seven overs to spare.

Meanwhile, Jammu & Kashmir made light work of chasing down Chandigarh‘s 241. Shubham Khajuria‘s 120 off 86 balls, and Henan Nazir‘s – playing only his second game – unbeaten 110 off 88 balls formed a partnership of 183 that came in fewer than 24 overs as they won with eight wickets and 16 overs to spare. Umar Nazir, Parvez Rasool, and Auqib Nabi had previously taken three wickets each.

Bengal‘s campaign ended with a loss to Haryana at the Eden Gardens. All five of Haryana’s bowlers were among the wickets, led by Sanjay Pahal‘s 3 for 32, as the hosts folded for 177. In response, Haryana had fifties from both openers – Chaitanya Bishnoi and Shubham Rohilla – anchoring different parts of their chase as they won by five wickets. They did, however, finish bottom of the table.

Left-handed Kamal Singh made his first ton in senior cricket to help Uttarakhand post 306 against Sikkim. Sikkim’s response never took off, and they ended their campaign with the aim to bat out 50 overs – which they did, finishing on 161 for 6.

In the other Plate matches, Assam and Meghalya followed similar templates – putting up scores in excess of 300 and winning by 83 and 182 runs respectively against Manipur and Mizoram.

The only match to buck that trend involved Nagaland chasing down 287 with eight wickets and just about as many overs to spare. Captain Rongsen Jonathan and Shrikant Mundhe both made centuries, while allrounder Stuart Binny capped his 100th List A game with a 37-ball 55 to see them home against Arunachal Pradesh, who had been fueled by an unbeaten 138 from Rahul Dalal earlier.

‘This was a shocker of a wicket’ – Hardik Pandya critical of Lucknow pitch
Gulf Giants Team Camp Set Up for Players To Express Themselves: Gerhard Erasmus
Sri Lanka on the verge of a selection committee shake-up
Lanning, Haynes pave way for allrounders to cash in | Women’s Ashes 2021-22
The worst leaves of the 2021-22 summer