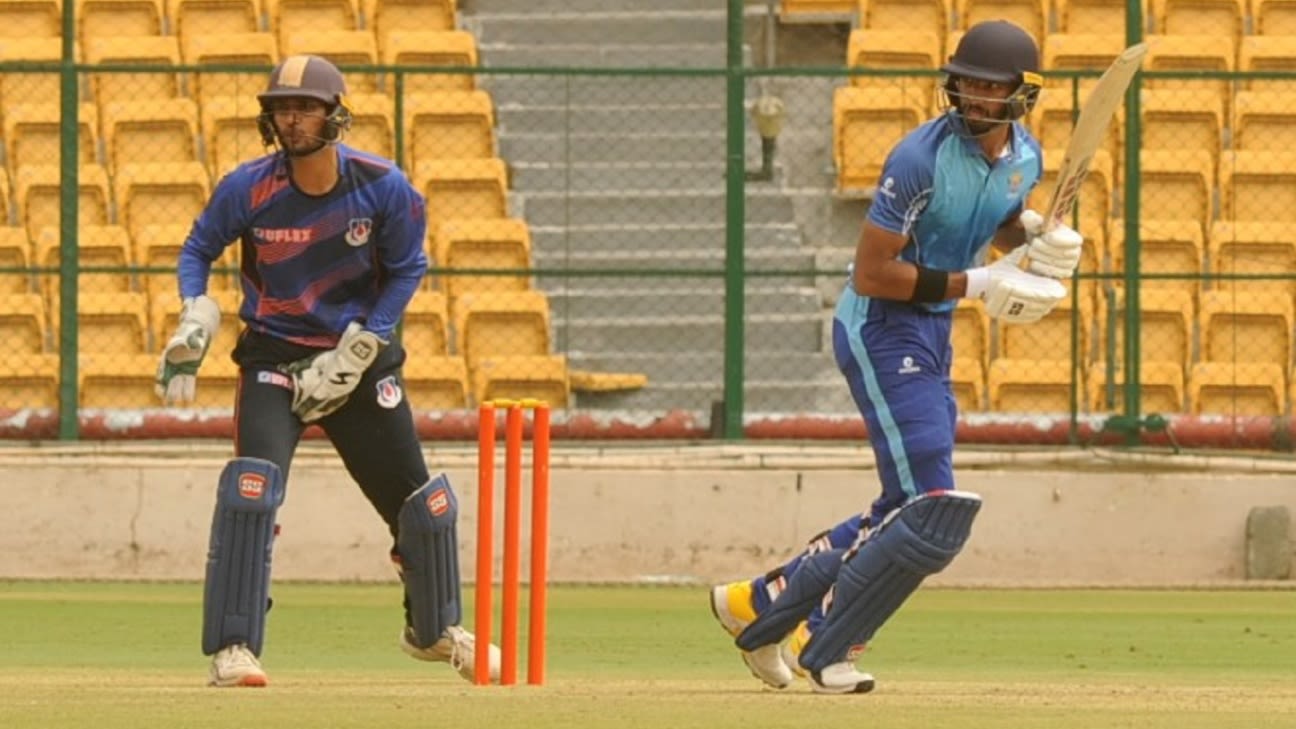 The league phase for three of the Elite Groups in the Vijay Hazare Trophy 2020-21 ended on Sunday, with Gujarat, Andhra and Karnataka topping Groups A, B and C.

The last round of the league phase will take place on Monday, with the teams finishing on top in Elite Groups D and E joining the other three group toppers as automatic quarterfinal entrants.

The format for this year’s tournament has the top teams from each of the five Elite groups progressing to the quarterfinals. They will be joined by the two teams who finish highest on points among all the other Elite Group teams. The team that finishes third on points will play the Plate Group topper in a pre quarter-final, and the winner of that match will be the eighth quarter-finalist.

Sunday’s games were marked by several teams going hard to improve their net run-rates, with a view to qualifying.

Gujarat came out triumphant in a top-of-table clash against Baroda, maintaining a clean slate to finish on top of the group, while Baroda finished second. Dhruv Raval (102 off 129) and Het Patel (82 off 84) were the fulcrum around which Gujarat put up 277 for 7, and Baroda could only muster 237 for 9 in response. Piyush Chawla (3 for 52), Chintan Gaja (2 for 40) and Arzan Nagwaswalla (2 for 47) were the main wicket-takers for Gujarat.

At the Daly College Ground in Indore, Andhra ensured their net run-rate would be the highest in Group B, romping to victory against Jharkhand in 9.5 overs after bowling them out 139. Harishankar Reddy led the way with the ball, taking 4 for 30. Andhra’s chase blasted off with an 82-run opening stand that came in just 5.5 overs, Ashwin Hebbar (44 off 18) and Ricky Bhui (57* off 27) ensuring a quick finish and a passage into the quarter-finals. Jharkhand would have been through to the quarter-finals if they had won.

Elswhere in Indore at the Emerald High School Ground, Tamil Nadu completed a big win over Vidarbha. Having bowled Vidarbha out for 150 in 41 overs, Tamil Nadu got to 152 for 5 in 11.2 overs. B Aparajith opened the bowling for Tamil Nadu and took 3 for 10 in six overs, while J Kousik (3 for 22) and M Mohammed (3 for 33) also had three-wicket hauls. Mohammed completed a fine all-round day with 37 not out off 14 balls, with N Jagadeesan’s 18-ball 48 the other notable score.

Madhya Pradesh overcame Punjab by 105 runs in an action-packed match at the Holkar Cricket Stadium in Indore, but it wasn’t enough to secure qualification. MP put up 402 for 3, powered by Venkatesh Iyer’s 198 off 146, with Aditya Shrivastava blasting 88* off 56. Punjab’s chase ended at 297 all out in 42.3 overs, but they had their moments with opener Abhishek Sharma smashing a 49-ball 104, having got to his century off just 42 balls.

Four teams ended up on 12 points in Group B – Andhra, Tamil Nadu, Jharkhand and Madhya Pradesh. None of the other three can make the quarterfinals however, due to at least three other teams among the Elite Groups ending up with higher than 12 points.

Three teams ended up on 16 points – Karnataka, Uttar Pradesh and Kerala. All three had a high net run-rate, having ended the league phase with comprehensive wins, but Karnataka’s was the highest at 1.834. However, UP (1.559) and Kerala (1.244) have ensured that they might still be in the running for the quarterfinals.

Karnataka’s openers led the team to a ten-wicket win at the M Chinnaswamy Stadium with a mammoth stand, after Railways had made 284 for 9 built around Pratham Singh’s 129. Shreyas Gopal’s 3 for 41 were the best figures, but the real stars of the day were R Samarth (130* off 118) and Devdutt Padikkal (145* off 125), as Karnataka completed victory in 40.3 overs.

Shivam Sharma, the 20-year-old left-arm spinner, took 6 for 22 as Uttar Pradesh bowled Odisha out for 148 in 40.1 overs. The UP batsmen then hauled in the target in 21.4 overs, losing four wickets.

At the Alur 3 cricket ground, Kerala bowled Bihar out for 148 in 40.2 overs, and then chased down the target in just 8.5 overs. Robin Uthappa continued his good form in the tournament, smashing 87 not out off 32, while Vishnu Vinod (37 off 12) and Sanju Samson (24* off 9) were equally destructive in a nine-wicket win. Uthappa reached his half-century in 22 balls, and hit four fours and 10 sixes overall. S Sreesanth took 4 for 30 while Jalaj Saxena, who opened the bowling with Sreesanth, was among the wickets too, with 3 for 30.

For the three teams in the Elite Groups already on 16 points but who haven’t qualified yet – Baroda, UP and Kerala – their chances will depend on how other results go in Groups D and E. While UP have the highest net run-rate, followed by Kerala, Baroda are some way behind with 0.399.

Mumbai have an all-win record with 16 points in four games, and play Himachal Pradesh in their final game. Mumbai’s net run-rate is a massive 2.268 – the highest in the league phase in the Elite Groups – so they should fancy their chances of qualifying even if they lose their last game. Delhi are on 12 points, and could reach 16 if they win their last league game, against Rajasthan. Delhi’s net run-rate is 0.473 though, and they’ll be looking to boost that considerably even while needing a win.

Saurashtra have won all games so far and are on 16 points. They play Services in their last league match. Their net run-rate is 1.133, lower than both UP and Kerala, so they will need a win to ensure automatic progression. Chandigarh are second, with 12 points, and play Jammu & Kashmir in their final league game. Chandigarh’s net run-rate however, is -0.213 so even a massive win in their final game might not be enough to take them to the quarter-finals.

Uttarakhand and Assam are both on 16 points in the Plate Group, and will play different opponents in their last league matches (Sikkim and Mizoram), but Uttarakhand’s net run-rate of 3.538 – as against Assam’s 1.382 – means they should qualify for the pre-quarterfinals from the Plate Group if points are equal.

M Vijay retires from international cricket
Rana in for Pandey as India opt to bat
Tom Curran steps away from red-ball cricket to focus on white-ball opportunities
Ajinkya Rahane to play for Leicestershire in 2023 county season
Ferguson, the unofficial leader of New Zealand’s pace pack