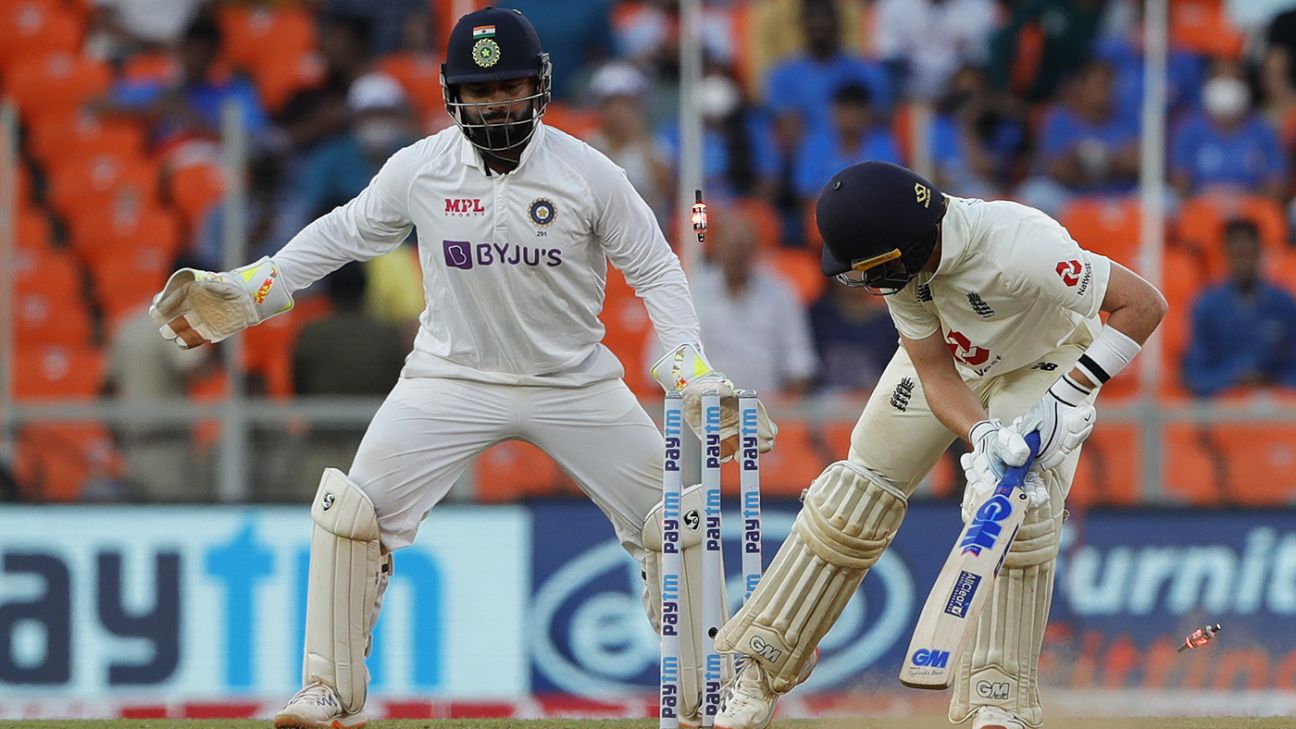 Sixteen pink-ball Test matches have been played so far, with only five of those stretching up to the fifth day. The most-recent pink-ball Test, between India and England in Ahmedabad, finished within two days, throwing up the shortest Test result since 1935 and the seventh-shortest overall.

Two days after that Test, R Ashwin conceded that the challenges posed by the pink ball to the batsmen could be responsible for such Tests ending quickly. The Ahmedabad Test aside, India have participated in two other pink-ball Tests, both of which finished in three days.

“It could be. Honestly, if you give a little bit of favour stacked towards the bowlers, this is what might happen,” Ashwin said during a virtual media interaction. “Because the ball…[there’s] a little bit of advantage towards the bowlers. It starts to swing more, it seams more, and the margin of error for the batter is so much more little. Instead of the ball beating the bat or probably getting a thick outside edge, it ends up getting a fine edge and goes behind to the keeper. These are things that we’ve noticed and it even happened at the Eden Gardens when we played Bangladesh.

Ashwin even cited the examples of the 2020 Adelaide and 2018 Auckland Tests, explaining that pink-ball Tests have usually had early finishes.

“It could very well be spoken about how we really played well in that game [against Bangladesh] and won that game and all that… but that’s been the nature of the pink-ball Test. Even the one in New Zealand, where England got all out for 59 [58], and we got all out in Australia for 36 – if you look at the larger picture of Test cricket, you might say these are one-off occasions, but these are regular affairs in pink-ball Tests.”

In the third Test in Ahmedabad, England reunited James Anderson with Stuart Broad at the expense of a frontline spinner in Dom Bess. England captain Joe Root later told the host broadcaster that the swing and seam the pink ball had offered at practice had prompted that decision. England’s selection came under sharper focus after they lost 19 of their 20 wickets to spin on a turner.

Ashwin: ‘What makes a good surface? Who defines this?’

As for Ashwin, he said that he was uncertain about the behavior of the pink ball.

“Look even before I started the game in the nets, we were a little skeptical as a spin group – I mean not as a spin group, I’ll just talk for myself,” Ashwin said. “But, when I did bowl, the balance of the ball seemed very different to that of the red ball – when you tried to put a lot of revs, it probably wasn’t rotating as much on the seam as I thought the red ball was rotating.

“Clearly, the chance of it catching the glossy surface was far greater and if at all it caught the seam, it was you know spinning quite big at times, and it was not really responding the way the red ball might respond. Whatever was happening was happening a little quicker off the surface, so I think it did make a difference. If we’d played a red-ball game on the same surface, I think the pace of the game might have been a touch slower. But these are all things I’m talking about in hindsight. Only if you’ve done it, you will know it.”

Sighting the pink ball wasn’t an issue, according to Ashwin, but he said that the way it skidded rapidly off the track was “quite different”. Ashwin and Axar Patel, in particular, undercut the pink ball to make life even more difficult for the tourists.

“The way it skidded was how it skidded (laughs) because I can’t really explain,” Ashwin said. “But a small few microseconds make such a huge difference in the game. If it’s going to skid on like even a fraction of the second quicker, it’s the difference between hitting the inside edge and hitting the pad. So, it is quite different, sometimes the batsman can be caught with bat behind the pad because the [pink] ball skidded faster than what you are used to the red ball skidding. So, to make an adjustment with the span of five-six days it’s not so easy, but the more we play, the players will get better at it.”

Ashwin said that India didn’t have any apprehensions about playing with the pink ball and reckoned that the players would deal with it better with more game-time.

“There is no apprehension. If there’s apprehension, we can probably express. There is no apprehension as such for the pink-ball Test. I think it’s completely a new sort of a facet that’s being introduced into the game. You are used to playing with the red ball, and everybody is conditioned, like I said, to playing with the red ball, and all of sudden they’ve brought in the pink ball. And the pink ball is bringing new dimensions to the game, so it’s about adapting. If you play more and more and obviously get used to it, the players are going to adapt better for the good.

“It’s the same thing with one-day cricket, right? We were playing with the red ball for a long period of time, then we shifted to the white ball. Initially, the white ball was doing a lot more and now it literally does nothing. That’s how this format will also evolve because people are trying to understand what works with the pink ball and what doesn’t, how to adapt and all these sorts of stuff. Anything new is going to throw a lot of challenges and that’s the beauty of the sport.”

“I don’t think there’s enough sample size to compare both because I’ve played only a grand two days of pink-ball cricket with the Kookaburra and the same with SG,” he said. “So, the surfaces have been different – different conditions and different dynamics to the ball. I think what I realised with the pink ball in Australia was it definitely aided more bounce and pace off the surface than the red one. Here also, it was the same. It offered more bounce and pace off the pitch than the red ball would. That’s probably due to the lacquer in the ball and also probably the slightly more prouder seam that both these pink balls have. I can’t really different much at this point of time and I’ll have a very few sample size in my hand when I’m done.”