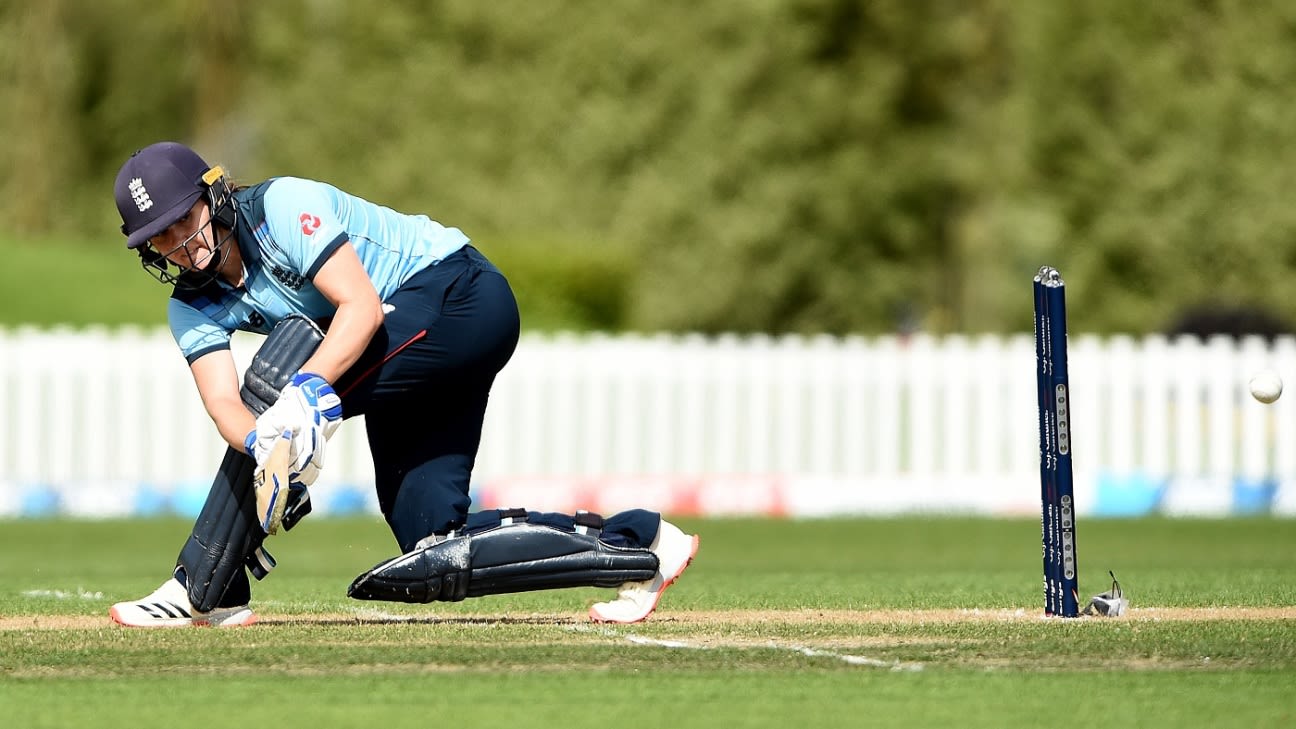 Nat Sciver produced a fine all-round display as England secured the ODI series over New Zealand with a game to spare in Dunedin. Sciver followed her 3 for 26, which included the key scalp of Sophie Devine, with a brisk 63 as England raced home with more than 12 overs to spare.

New Zealand did well to keep themselves in the contest having fallen to 34 for 5 after opting to bat as Brooke Halliday continued her fine start to international cricket with a second consecutive half-century. New Zealand appeared to have a chance when England slipped to 12 for 2 in the chase, but Sciver and Tammy Beaumont added 103 in 127 balls for the third wicket.

Earlier, Katherine Brunt had put the home side on the back foot when she dismissed both openers in her first two overs: Hayley Jensen edged a cut against a ball too close for the shot and Natalie Dodd dragged on.

Sciver then made her first mark on the game when Devine chipped a catch to midwicket, and soon added Amelia Kerr to her tally.

Amy Satterthwaite departed in curious circumstances when she walked having edged a cut off Kate Cross with no appeal coming from keeper Amy Jones, and barely a murmur from any England player, although Snicko confirmed a healthy nick.

Halliday and Katey Martin briefly steadied the innings but it was the last four wickets that really bolstered New Zealand as they added 116 and enabled them to almost bat-out the 50 overs. Halliday was the eighth to fall having brought up her fifty from 63 deliveries, when she edged Sciver for her third wicket, before Hannah Rowe (29 not out) and Jess Kerr (28) put on 53 for the ninth wicket.

It was Jess who made the first breakthrough for New Zealand when Danni Wyatt dragged on a drive in the first over and England were wobbling a touch after captain Heather Knight was run out from cover.

However, Beaumont played the anchor role and Sciver took charge in good batting conditions as England eased along at five an over with New Zealand, who were without the injured Lea Tahuhu, unable to build pressure. Halliday claimed her first international wicket when Sciver’s run-a-ball innings ended with a catch to midwicket.

Beaumont reached her second fifty of the series from 93 balls while Jones kept the tempo high with eight boundaries, the last three of which came in the space of four balls against Satterthwaite to end the match in convincing style.