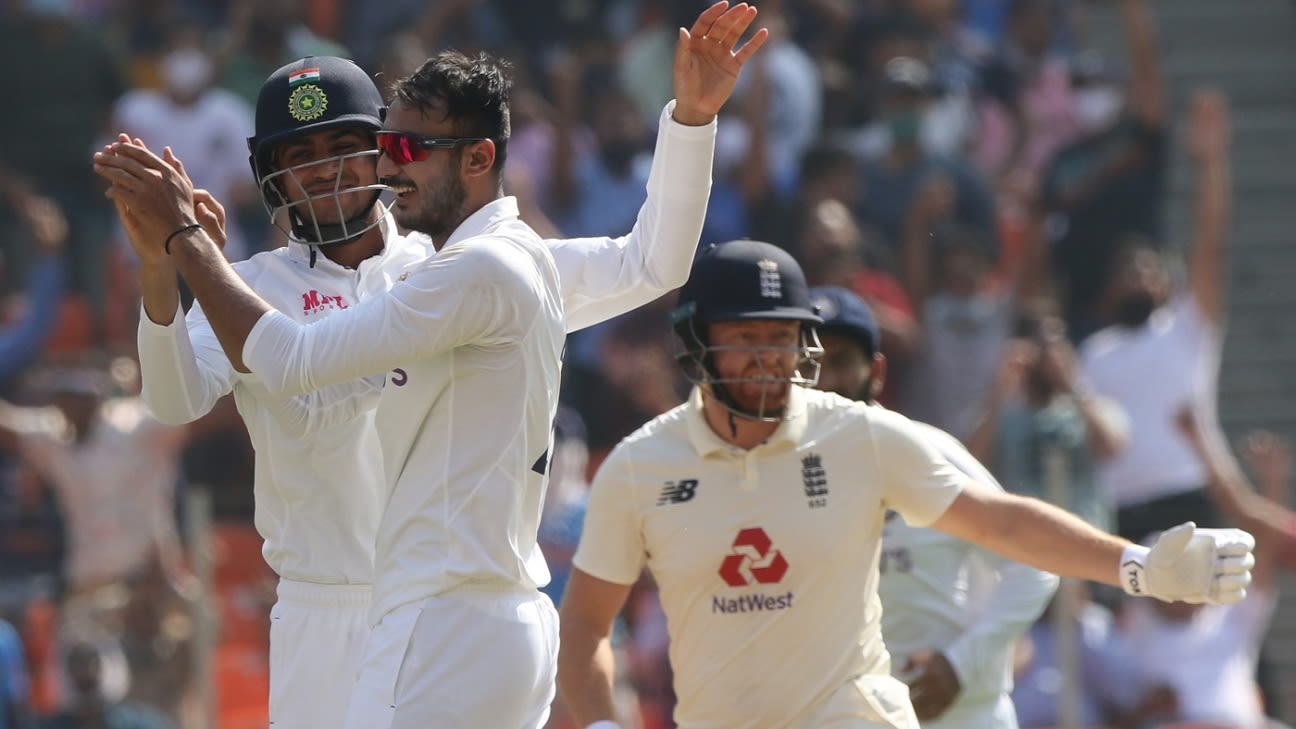 England are considering making a formal complaint to the ICC following their two-day defeat in this week’s third Test in Ahmedabad – an experience that Chris Silverwood, England’s head coach, says he hopes will galvanise his young batsmen to fully cash in when the going is good in the future.

England were routed by ten wickets in the day-night Test at the newly opened Narendra Modi Stadium in Motera, after collapsing to scores of 112 and 81 in their two innings – making for an aggregate of 193 that is their lowest in India, and their second-lowest anywhere in the world since 1904.

India’s own batting scarcely fared any better in their first innings, as Joe Root returned the extraordinary figures of 5 for 8 with his part-time offbreaks. And while the skiddiness of the pink ball was cited as one factor, with 20 of the 30 wickets falling either lbw or bowled in the course of the contest, the lavish turn that all the spinners extracted in between whiles made survival extremely tricky for even the best on show.

“We will be talking about certain things behind the scenes,” Silverwood said. “At the same time, we are disappointed that we are sat here when there should be three days of cricket left. I am sure a few spectators are as well. We’ve spoken to [match referee] Javagal Srinath but not about the pitch. Joe and I have to have a sit-down, have a conversation and see where we go with it.”

Opinion has been sharply divided about the merits of the Motera pitch. Virat Kohli, India’s captain, blamed “below-par batting on both sides”, while his counterpart Root said the stadium’s 40,000 fans had been “robbed” of the chance to witness a proper battle between bat and ball. “People had to watch me get wickets on there which shouldn’t be the case,” he said.

However, Silverwood also acknowledged that England had been complicit in their downfall, particularly after winning an important toss and reaching 74 for 2 in their first innings. Had they gone on to post even a score of 200, they might have been in a position to control the contest. Instead they lost their last eight wickets for 38, and allowed India to reach 99 for 3 by stumps on the first day.

“We do have to get better on these pitches and we do have to accept there’s places where we could have improved,” Silverwood said. “Look at the first innings. We had an opportunity there to score more runs and next time we’ll pounce on that. And whatever the pitch did or didn’t do, India ultimately played better than us on that surface. But it probably pushed us to the extremes of what most of our players, if any, have experienced.”

With that in mind, Silverwood is adamant that his team will be stronger for the experience – particularly the contingent of young batsmen in England’s ranks, many of whom have been experiencing Test cricket in spinning conditions for the first time.

It hasn’t been a tour of unmitigated failure for England’s rookies. Dom Sibley made back-to-back fifties in England’s victories in Galle and Chennai; Zak Crawley’s first-innings 53 was one of only two scores above 27 for either team in Ahmedabad, while Dan Lawrence, who did not feature in the third Test, showed his potential with a hard-fought 73 in his maiden Test innings against Sri Lanka.

However, England have not passed 178 in five attempts since posting 578 in their maiden innings of the series, and all the players’ techniques have all been exposed in the prevailing conditions – not least that of Ollie Pope, who was beaten in flight rather than off the pitch by R Ashwin, and bowled in both innings in Ahmedabad.

Pope at least fared better than Jonny Bairstow, who bagged a pair from No.3 on his return to the team following his mid-tour break, and it is a telling statistic of the winter so far that, while Root has made scores of 228, 186 and 218 in three individual innings, Sibley’s tally of 191 in five Tests is the next best return by any batsman.

And yet, having been credited with reappraising England’s approach to Test-match batting since his appointment as head coach in 2019, Silverwood is sure that the struggles of recent weeks will harden his team’s resolve to make their starts count – not just in India, but on into next winter’s Ashes tour too.

“You look at the guys we’ve got in there, your Popes, Crawleys, Sibleys, all these guys coming through this experience,” Silverwood said. “As tough as it is at the moment, it will hopefully galvanise them. When they do get in on flat surfaces, better surfaces, it will make them even more hungry and desperate to make sure they get the runs on those surfaces.

“When we travel to other countries such as Australia, hopefully if they’ll get themselves in, they’ll get greedy and go big. And that’s where it comes back into our gameplan of making big individual scores, big first-innings scores, which until recently we’ve been very good at, and creating big partnerships.

“Hopefully this experience will just harden them towards that and make them potentially just appreciate the flatter wickets a little bit more, and make them more greedy for it.

“But equally, hopefully they do take a lot from it, and next time they come onto a surface or experience a situation like this, it won’t be as much of a shock to them and hopefully they will have had a think about how they use their skills to combat what’s in front of them.

“As tough as it is and as painful as it is at this moment, hopefully we can take some good lessons.”