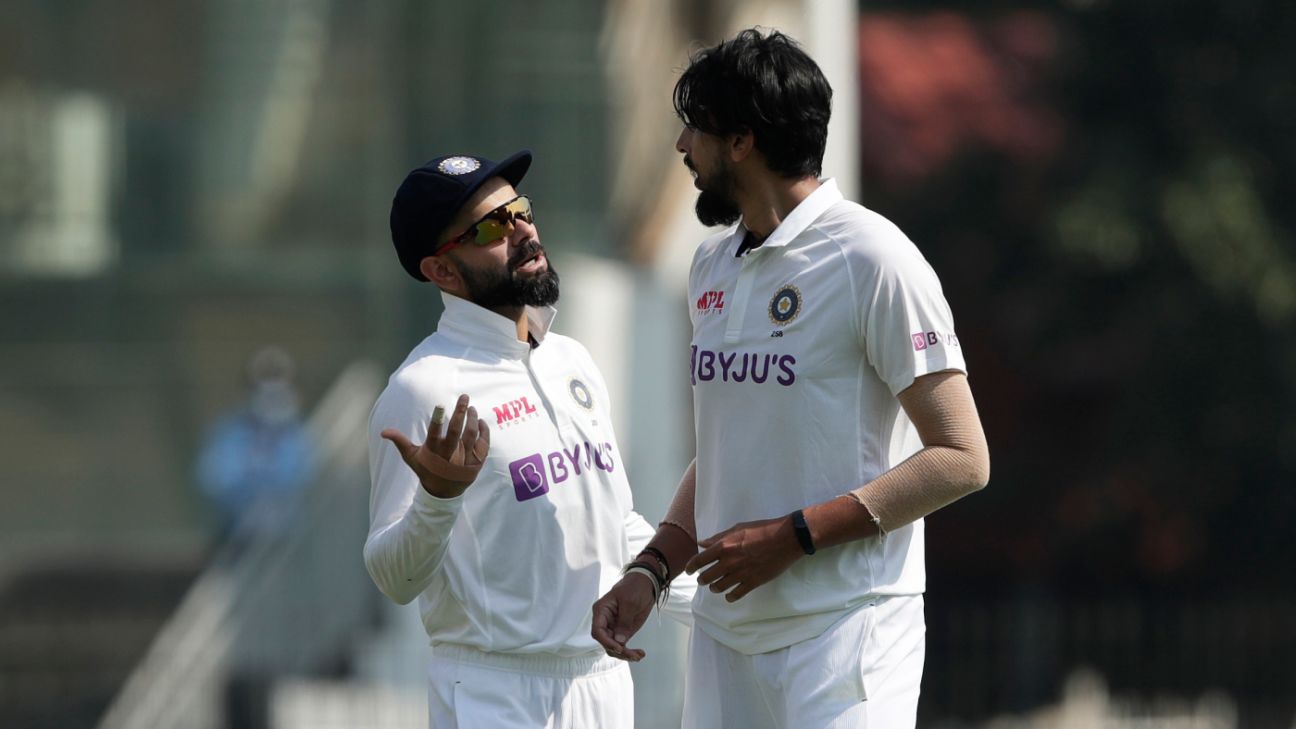 Virat Kohli kicked his sleeping room-mate, Ishant Sharma, out of the bed to inform him he had been selected for India 15 or so years ago. Things haven’t changed that much over time. To Ishant, the Ahmedabad Test starting Wednesday is just another Test; to Kolhi, the fast bowler’s 100th is as good as the 150th for a batsman in modern cricket. On the eve of the Test, Kohli paid rich tribute to his “dear friend” and his attack’s spearhead.

“I have known Ishant for many years now,” Kohli said. “He started playing state cricket with me from his first season onwards. We have been room-mates for many years in state cricket, in Ranji Trophy cricket. When he got selected for India, he was fast asleep in the afternoon, and I had to kick him off the bed and say you have been selected. And he wouldn’t believe me. That’s how far we go back.

“I couldn’t be happier for him. Paying 100 Test matches as a fast bowler is no mean feat. Especially in our conditions where things get so difficult but he persevered, he kept working hard. That’s been his essence from day one. Very hard-working guy, very honest about the game, about his ability, about what he brings to the table. Very self-assured.”

Looking at Ishant’s amazing performances in the last four-five years, it is easy to forget he spent a majority of his career as the workhorse of an incomplete attack with some ordinary figures. Ishant’s turnaround began when he learnt under Jason Gillespie at Sussex how to get fuller without sacrificing his pace. It also coincided with India managing a more complete attack, which meant Ishant was not so easy to see off. His best years have also coincided with Kohli’s captaincy.

“I was most excited to work with him and really bring the best out of him as an attacking fast bowler,” Kohli said. “Something that clicked immediately [when I took up captaincy]. He knows my mindset. He knows me inside out. There is a big trust factor. I know him inside out. I know he will respond to advice, he knows I am going to listen to his plans as well. I think it has worked really well for both of us. Not just for him as a fast bowler, but for me as a captain to have that kind of experience and the kind of consistency he brings along with the attacking lines and lengths he bowls.

“I have just been very very happy to see him enjoy his bowling over the last four-five years and really become that stalwart of Indian fast bowling group. Couldn’t be happier for him. Really, really excited I am going to be present on the field when he plays his 100th game. To see the smile on his face and just run in and bowl will be great to watch for a dear friend of mine.”

Kohli was in awe of Ishant’s conditioning, motivation and commitment. “To maintain his body so well, to play 100 Tests, this longevity is rare to see among the fast bowlers today,” Kohli said. “Sometimes you lose motivation too. He has the skill, mind you, to play the shorter formats. If he wanted he could have improved his four-over and 10-over cricket and could easily be a regular in IPL and present a case for himself in one-day cricket. But he dedicated all his commitment and attention to Test cricket, prioritised it. To play 100 Tests for a fast bowler is as good as 150 Tests for a batsman. I hope he plays for many more years and inspires the next group of fast bowlers too.”

Pant: ‘Compare my numbers when I’m 30-32, no logic before that’
Pat Cummins: There are no cowards in the Australian team
Afghanistan opt to bat; Dhananjaya Lakshan in for Sri Lanka
Northern demolish Sindh to win Quaid-e-Azam title for the first time
James Anderson feels the rare thrill of the unknown ahead of Pakistan Test bow