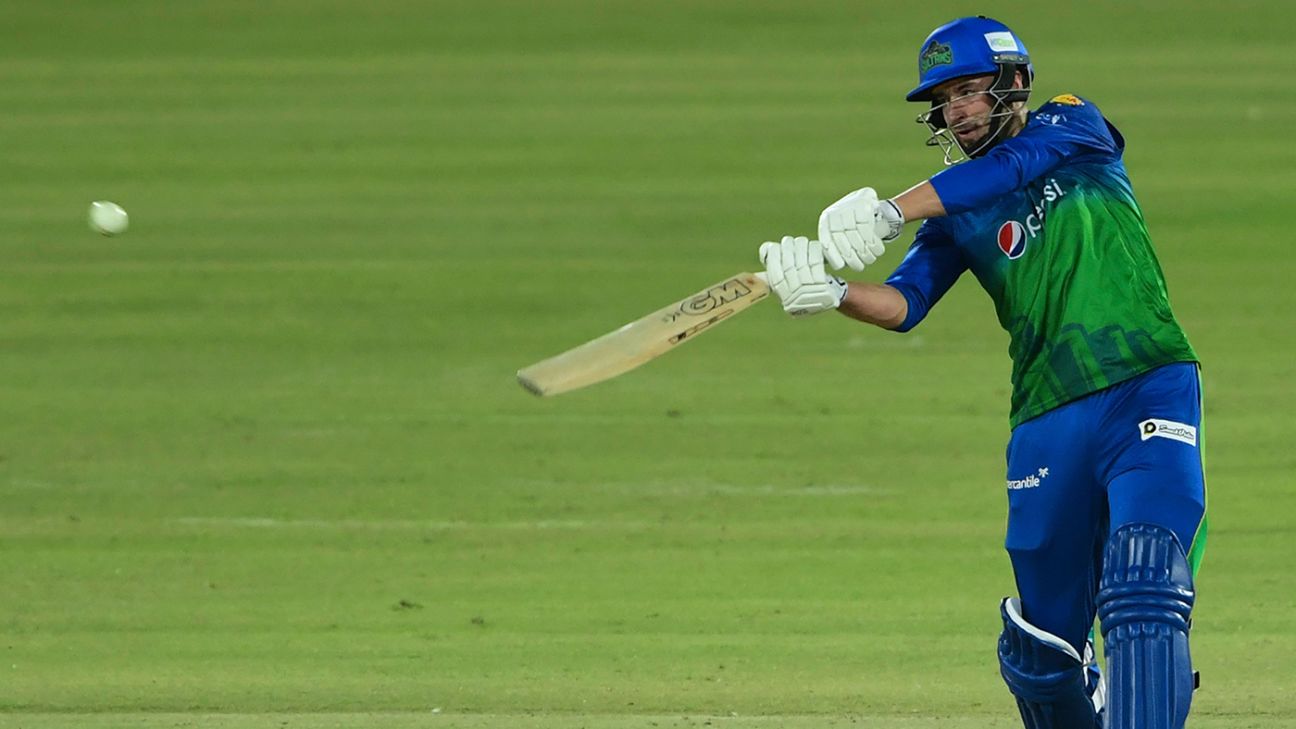 Peshawar Zalmi picked up their first points of the season with a near-perfect batting display in chase against Multan Sultans. Anchored by a Tom Kohler-Cadmore 53, and handy knocks from Kamran Akmal (37) and Imam-ul-Haq (48), Zalmi outdid Sultans’ 193 with six wickets and six balls to spare. A slow-burn kind of innings exploded into life at the end, thanks to Haider Ali‘s blitz, 24 off just eight, and Sultans’ thin bowling on the night was laid bare for all.

Sultans themselves had had a good batting innings, one that had begun with the early wicket of Chris Lynn, but was set right by a trademark languid effort from James Vince. Coming in at No. 3, Vince displayed his aesthetic gifts in partnerships with captain Mohammad Rizwan (41), and a rollicking Sohaib Maqsood (36). But their total – having lost only four wickets – seemed well short by the end of the evening.

Star of the day

The stars were strewn all over for Zalmi. With the ball, Mohammad Imran nicked a four-over spell on an expensive night: 4-0-24-1, with the wicket of Rizwan. Mohammad Irfan got Lynn with his first ball and then held a sharp catch to end Vince’s innings.

The architects were their top three – Akmal, Imam, and Kohler-Cadmore, who put up back-to-back half-century stands in a tall chase. With that base, they made perfect use of Sherfane Rutherford, Shoaib Malik, and Haider to accelerate at the end. Even with the loss of some quick wickets at the end, they seemed in total control – particularly Haider, who said he had been padded up and waiting since the innings began, with a potential No. 3 role. Ultimately, he bashed an unbeaten eight-ball 24 to make sure Sultans had no further openings.

Miss(es) of the day

Sultans had a decent powerplay, but one that might have kept them from getting a bigger score on a belter of a batting surface. Their 46 for 1 involved a bit of rebuilding after the early wicket, but Rizwan and Vince took some time getting to pace with the pitch. They did put up what was then the highest total of the tournament, but their bowling innings showed they didn’t quite get as much as was on offer.

Sultans also missed a trick with their bowing combination. The use of Carlos Brathwaite as a fifth bowler seemed contingent on their experienced bowlers all hitting their straps. On this night, that didn’t happen and his 42 off four overs, including the final over where Haider changed the momentum of the chase, proved costly.

There was also a demonstrable miss – a run-out opportunity with Kohler-Cadmore stranded halfway down the pitch in the 10th over.

Usman Qadir can’t take a step into his bowling action without comparisons to his father, and in a short T20 career, he’s shown guile that warrants those comparisons. While it’s been a sedate start in other formats for him, Qadir showed why he enjoys success in this format – he revels in keeping batsmen glued to the crease with little idea what the ball is doing. And he did that on Tuesday night as well, getting Sultans the breakthrough with a googly that was preceded by dipping length balls that could have beaten either edge of the right- and left-handed batsmen at the crease – Akmal and Imam. He did end up getting Akmal with a skiddy googly, and while Shahid Afridi struggled to get into his spell with comfort at the other end, Qadir kept the scoring rate in check.

India opt to bat in first semi-final; both teams unchanged
“…Best Thing About His Game”: Bhuvneshwar Kumar On Young Indian Pacer
Chahar, Ashwin, Hooda? Competition heats up as India’s Asia Cup selection looms
Rohit on giving Avesh Khan the final over: ‘It’s all about giving the opportunity to these guys’
Barbados put India in to bat in knockout clash