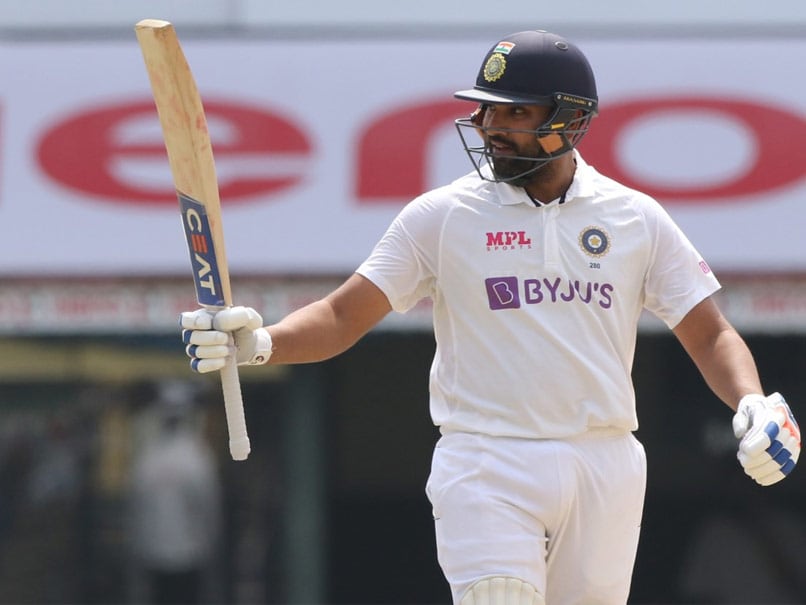 India batsman Rohit Sharma on Sunday said that the final of the World Test Championship (WTC) is too far ahead, and the side is just focusing on following the right process. The four-match Test series between India and England currently stands level at 1-1, and now both teams will face off in a pink-ball Test, beginning February 24 at the Motera Stadium. If India win the ongoing series by at least a margin of 2-1, then they will qualify for the final of the World Test Championship. “To be honest, when we are playing the game, the focus is not on the outside. We want to qualify for the WTC finals, but we still to do a lot of things right to be there. We will be very happy to qualify for the WTC finals, but there are little steps that we need to take before we reach the finals. It is too far ahead still, we have got two Tests to play before that, we will see what happens after that,” said Rohit during a virtual press conference on Sunday.

“You just have to focus on the process, you do not need to think too far ahead. If you try to stay in present, I do not think you will feel any pressure. It is a five-day game, so the focus and pressure changes every day. It is important to be in the moment and think about what you need to do on the given day to get the best out of your skillset. When you do those little things right, it adds up and you achieve what you always wanted to achieve as a team,” he added.

Rohit Sharma had missed the white-ball series and then the opening two Tests against Australia. The right-handed batsman had made a comeback for the last two Tests and the Indian team under Ajinkya Rahane, managed to defeat Australia in their own backyard to retain the Border-Gavaskar Trophy.

“It was a long procedure once I came back to India from Dubai. I went straight to NCA and I was there for a month trying to get fit. Once I knew I was okay to travel, I knew the hard part was coming which was going to Australia and quarantine for 14 days. Luckily for me, BCCI and Cricket Australia came together and they got me a room where I could train. I had some pieces of equipment in my room which helped me to follow the routine which I had done in NCA,” said Rohit.

“It was not the first time that this happened to me where I had five-six days to get ready for the game, I have done it in the past, I know what needs to be done to get ready for the Test match. It was not easy, a lot of people helped me. It was a good journey, there were a lot of learnings for me personally. I knew the conditions in Australia so it helped me prepare. The last ball was bowled in Brisbane and we were so happy to get that victory, it was one of the best victories that India ever tasted outside India, a lot of things were going against us but we came out on the right end,” he added.

Talking about the challenges of fielding in a new stadium (Motera), Rohit said: “The focus would be on getting used to the new lights and seats inside the Motera Stadium. You just need to get used to all these types of things, the new seats are shiny, probably we are going to have a long session on the field tomorrow to get used to the outfield and slip catching. Every new ground you go to, you try and get used to the lights and surroundings. It is not the first time for us to go to a new stadium.”

India had achieved an emphatic 317-run win against England in the second Test of the ongoing four-match Test series. As a result, the series stands level at 1-1 and the Virat Kohli-led side has also reached the second spot in World Test Championship (WTC) standings.

India remain in contention to make the final of the ICC World Test Championship. The victory in Chennai on Tuesday has lifted India to the second position with 69.7 percentage points on the points table, but they cannot afford to lose another match as they need to win 2-1 or 3-1 to qualify for the final of the maiden edition of the championship.

England, who led the table after winning the opening Test, have slipped to the fourth spot with 67.0 percentage points. They can still qualify, but for that, they must win both remaining matches of the series against India.