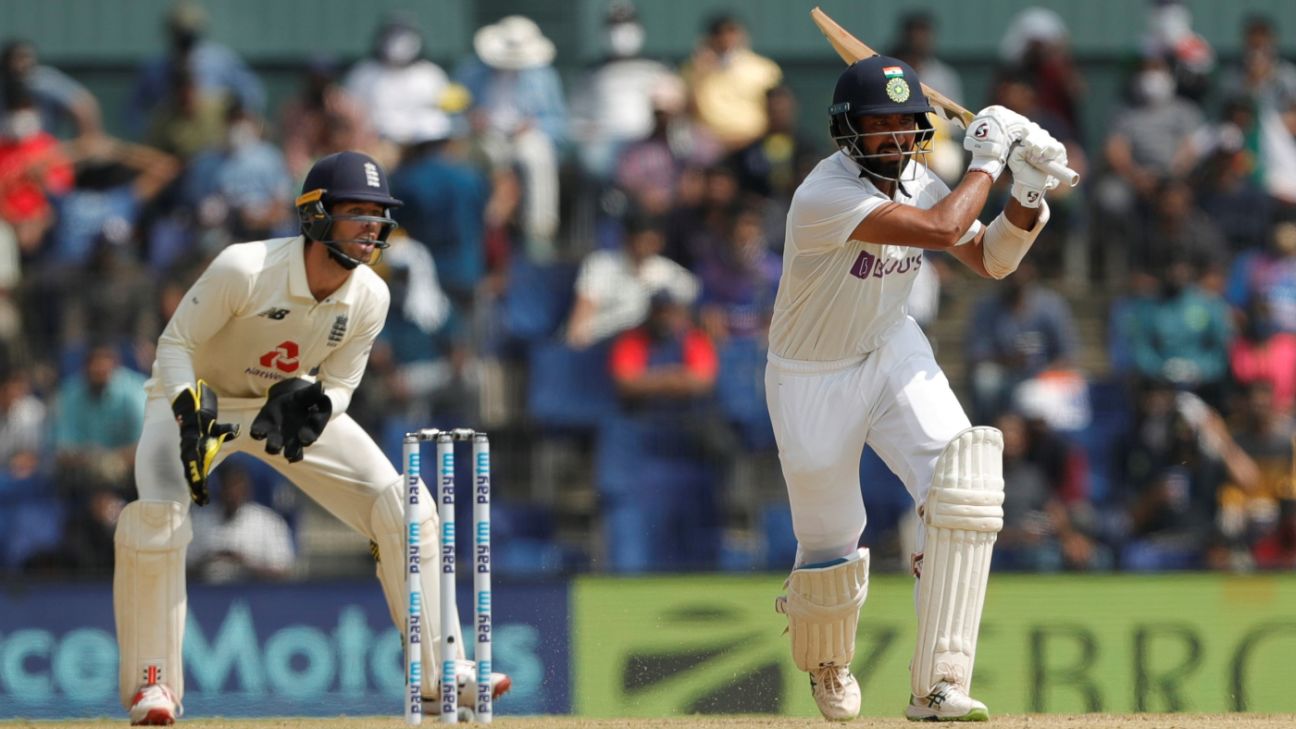 Cheteshwar Pujara isn’t ruling out the possibility of a short county stint this summer, as preparation for India’s tour of England in August, while also insisting he’s keen to prove himself in the shortest format after finding an IPL team in Chennai Super Kings after a gap of seven years. Pujara was picked up at his base price (INR 50 lakhs) at the IPL auction on Thursday, which means he’ll once again play under his first India captain, MS Dhoni.

“First of all, I’m really glad to be part of the IPL. It’s good to be back again and I’d like to thank CSK for picking me,” he said after India’s training session in Ahmedabad on Saturday. “At the same time, with regards to county cricket we still have enough time before we play the England Test series. Once the IPL will be over, there is a window where I can play a few county games. That call I’ll take once the IPL is over or in-between [the tournament].

“There will be enough time to play some county games. We also have a couple of practice games [against India A] before the Test series. But yes, it’s good to be back in the IPL. I haven’t spoken to them [CSK management] yet but I always want to play the shorter formats. But for now, my focus once this series is over will be on the IPL and after that, I’ll think about county cricket and the big series against England in August. Hopefully, we will play the World Test Championship final as well. I want to focus now on the next two Tests, both of them are important for us to qualify.”

In a way, a return to Ahmedabad is a little like life coming full circle for Pujara. The last time he played here was way back in November 2012, when he was just setting out to make a mark at No. 3 in the post-Dravid era. On a turner, India utilised the toss to their advantage by setting up an imposing first-innings total, with Pujara making 205 against an England attack of James Anderson, Stuart Broad, Graeme Swann and Samit Patel.

The surroundings and the surface, though, are starkly different this time around. The stadium has now been redeveloped to accommodate 110,000 spectators – although only half of those can be in attendance for the third Test – and the surface they’ll encounter here could be much different to the one from 2012, because they’ll be playing a day-night Test with the pink ball. The pandemic has meant Ahmedabad has only hosted a handful of T20 games – the Syed Mushtaq Ali knockouts – before this big match. Pujara was posed a question on the uncertainty of the challenges of playing on an untested surface, but it’s not something he’s too worried about.

“We have three-four days [for the Test] and a lot could change,” Pujara said. “It looks a decent pitch but it’s difficult to predict anything, considering we’re playing with a pink ball. With the red ball, it’d be a different ball game, but with the pink ball, it’s difficult to assess. You expect something, but it could turn out to be something else. I want to just try and keep things simple and not worry too much about the pitch.”

The one thing India do expect is dew, which could potentially mean they’ll play three seamers, even though Pujara steered away from any talks over team combination. “Yes, there maybe dew,” he said. “Looking at the weather, there’s a possibility of dew in the final session. The guys have played a lot of cricket with the white ball here, and the bowlers are used to it. As batters, we’ve played with the pink ball. It could [affect] in the third session, although how much we don’t know yet. We will have a better idea [over the coming days] but we are expecting dew.”

Pujara was also reminded about India’s previous pink-ball Test – the infamous 36 all out in Adelaide two months ago. He swatted it away with a chuckle, insisting there’s going to be no baggage from that game, and instead chose to draw positives from how well India batted in the first innings of that Test, where they even claimed a slender lead over Australia.

“I’ve played so many Tests but with the pink ball, even I don’t have enough experience,” he said. “I don’t think it matters a lot when you play one-off pink-ball Tests, we will get used to it as we keep playing more. We’ll have to just play normal cricket, have similar game plans like we had in the previous Test match, depending on the pitch. We’ll just stick to that. In Adelaide, the ball was swinging around and we had one bad session of poor batting that led to that disaster, but overall if you look at the first innings, we were in a dominating position.”

‘Chennai pitch not dangerous at all’

Pujara was asked for his verdict on the Chepauk surface for the second Test, in which England folded cheaply in both innings. India’s spinners ran amok, picking up 17 of the 20 wickets to fall, with none of the visiting batsmen going beyond the 43 Moeen Ali made in the dying moments of the match which India won by 317 runs on the fourth day.

“Sometimes, if you’re playing on a turner, you find it difficult, but it wasn’t a dangerous pitch at all,” he said. “When the ball spins, people find it difficult to score runs. When we go overseas, we also play on seaming tracks where games finish in three or four days. We still have to play on pitches with grass and seam movement. When it comes to turning tracks, you can’t define how much it should turn. There’s a thin line, but I don’t think it was a bad pitch. Yes, it always becomes difficult in the second innings, but even when we play in Australia on fourth or fifth-day tracks, balls can hit the cracks and take off. As a team, I don’t think we had an issue, am sure England once they’re used to it and play more matches, they’ll also figure out a way.”

It’s not often Pujara goes through an entire press conference without questions about his batting. And while he’s made key contributions right through the summer, the one thing he’s looking to tick off is getting to three-figures, something he last did in Tests in Sydney in January 2019.

“I started well, got off to starts but got out unfortunately [in the second Test],” he said. Pujara was out to a pull shot that deflected off short leg to the midwicket fielder in the first innings. In the second, he was run out after his bat got stuck in the turf while trying to get back into the crease.

“The way I am batting, although the three-figures haven’t come, I am hoping it wont’ be too far away. As a batsman, what is in my control – my practice, preparation, process – it’s been wonderful. I’m confident of getting a big score very soon.”