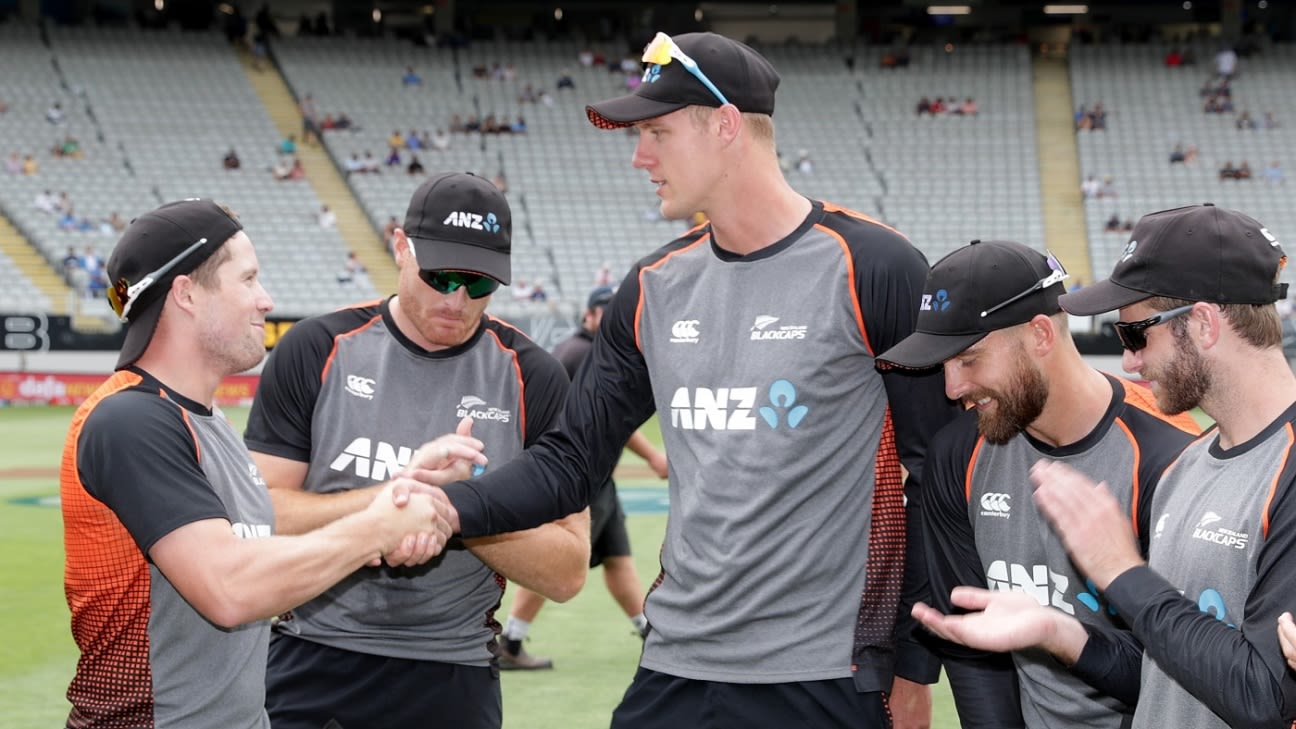 “For me, it’s about how can I learn, how can I grow, and focusing on trying to do the job for the team at that time”

Kyle Jamieson had originally planned to sleep through the IPL auction, like Jimmy Neesham, but then woke up at around midnight in Christchurch to watch the Royal Challengers Bangalore, the Delhi Capitals and the Punjab Kings bid furiously for him. The 6’8″ quick ended up attracting the day’s second-highest winning bid, with Mike Hesson‘s Royal Challengers signing him up for INR 15 crore (USD 2 million approx).

“It was pretty surreal, really, and it’s such a unique experience to watch yourself go through an auction like that in the early hours of the morning,” Jamieson said. “And I think it’s probably still trying to sink in a little bit and try to take in…

“Yeah, it was weird, there’s no textbook to say how to approach that sort of stuff – that’s probably how I’ve tried to take it. It’s such a unique experience and it’s trying to embrace the whole situation of it all as just try to, I guess, enjoy the moment.”

Having watched the madness unfold, Jamieson first called up his partner and then his parents.

“I actually called my partner and actually woke her up,” Jamieson said. “She was asleep, and that was a pretty cool moment. Kind of sit back and there wasn’t a whole lot of words to be spoken to be fair, but then called mum and dad – they were up as well. Did that and then turned the phone off and tried to get some sleep.”

Jamieson was also pleased to share the moment with former New Zealand quick Shane Bond who incidentally will plot against Jamieson in the Mumbai Indians backroom in the forthcoming IPL.

“I had a message from Shane Bond as it [auction] was going and he was sort of saying, ‘How good is this!’ I didn’t actually know what the amount of money was and how that translated to New Zealand dollars,” Jamieson said. “It was quite cool to share that moment with him and sort of ride that two or three minutes with him.”

Having become the highest-paid New Zealander at an IPL auction – his senior fast-bowling partner Trent Boult had previously attracted a bid of INR 5 crore from the Kolkata Knight Riders in 2017 – Jamieson is now preparing to buy coffee and beer for his team-mates and also cop some friendly banter from them.

“Yeah, I think there will be a bit [of banter] from Boult, [Tim] Southee etc. So, no, it’s all part of it, and there’s a lot of banter thrown around in this group anyway and it’s such an enjoyable place to be. It’s all harmless and just good fun.”

Jamieson was looking forward to linking up with a star-studded RCB contingent, which also includes Australia allrounder Glenn Maxwell who was signed for INR 14.25 crore (USD 1.95 million approx).

“I think it’s such a special experience and I think [I’m] so fortunate to go to a team with superstars of the game like that,” Jamieson said. “They’ve had success for such a long period of time – those guys…Just to rub shoulders with them and try to learn and grow as a cricketer is something that I’m relishing.”

Jamieson has never played competitive cricket in India previously, and the hefty price tag could invite pressure, but he downplayed it and hoped to pick up new tricks. His maiden IPL stint could potentially tune him up for the T20 World Cup, which is also slated to be held in India later this year.

“To be fair, I don’t think a whole lot changes to me,” Jamieson said. “I accept that there will be expectations but that’s been the case the whole time I’ve played. When you play your first one-day game, first Test, and different series, there’s always expectation, but it’s probably more externally than it is with me. For me, it’s about how can I learn, how can I grow, and focusing on trying to do the job for the team at that time.”

Shane Jurgensen, the New Zealand bowling coach, also believed Jamieson wouldn’t be distracted by the price tag and backed him to succeed in India with his pace and bounce.

“He won’t change,” Jurgensen said. “He will still do his thing, his preparation, and he works hard. Like all our guys, he will do what he does. I think he will take it and he’s a very level young man – he’s worked hard on a lot of areas in his game and as I said it’s [a] reward for all he’s done.”

After Jamieson bagged 6 for 7 – the best figures by a New Zealander and the fifth-best overall in T20 cricket – in the Super Smash on New Year’s Day in 2019, Hesson had tweeted: “An impressive bowler who at 6ft 8in can swing it… another one to add to the @BLACKCAPS stable.” Jamieson has since broken into New Zealand’s side across formats, most notably playing a crucial hand in their run to the WTC final, and now Hesson has added Jamieson to the RCB stable as well.