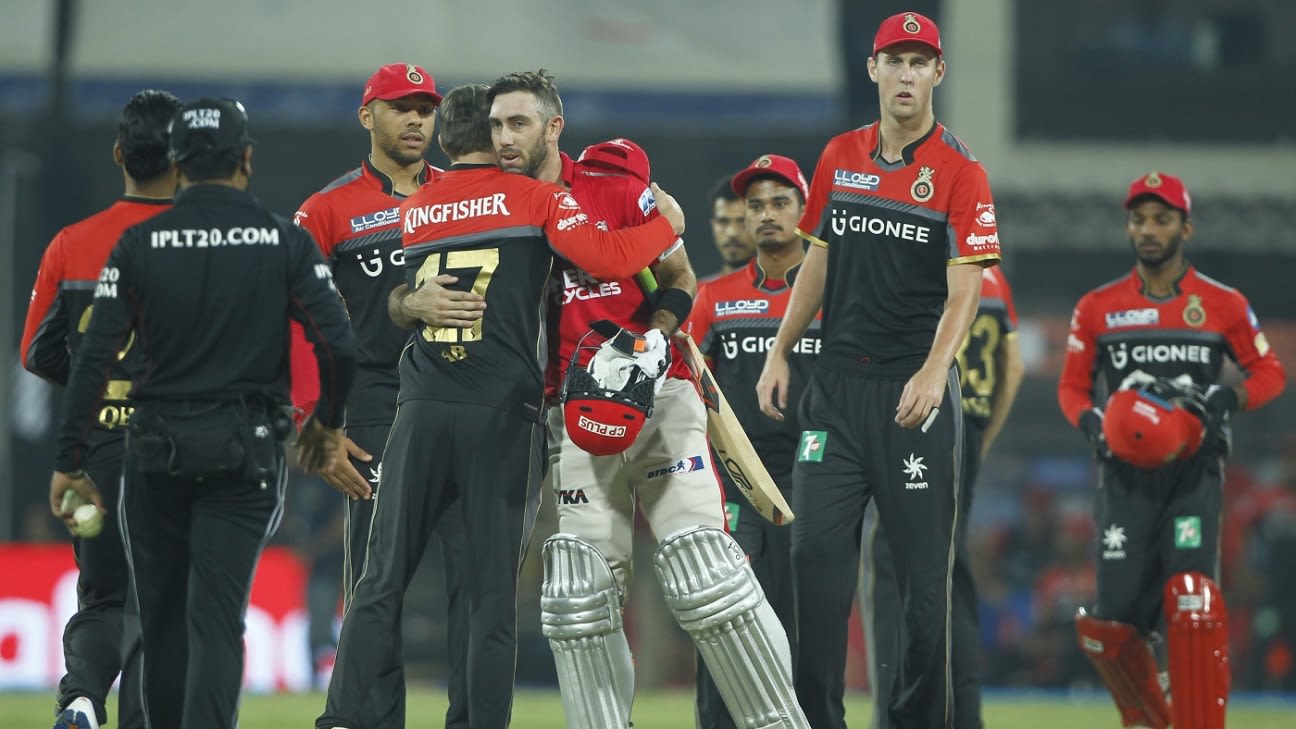 Three days before the IPL 2021 auction, Australian allrounder Glenn Maxwell has said he wouldn’t mind playing for the Royal Challengers Bangalore as that would allow him to fulfil the desire of playing alongside his “idol”: AB de Villiers.

“That’ll be awesome. AB [is] one of my idols and one of the guys I’ve always tried to watch the way he goes about [things],” Maxwell said during a media interaction on Thursday from New Zealand, where he is part of the Australian squad for the upcoming T20I series. “It’ll be awesome to work with him, and he’s always been really helpful to me along the journey. Whenever I’ve caught up with him, he’s been brilliant. So to be able to work with him first hand will be pretty cool.”

Having released several players including Chris Morris, Shivam Dube and Moeen Ali – the Royal Challengers are likely to be on the lookout for an allrounder. Maxwell is a batsman who can go in at the start of the innings and play the finisher’s role, while also providing a solid fingerspinning option. Maxwell said that he “gets along” well with the Royal Challengers’ captain Virat Kohli, too. “I get along with Virat pretty well. It’ll be certainly nice to work under Virat and will certainly enjoy batting with him – that’s for sure.”

If the Royal Challengers do manage to hire Maxwell, they will become the fourth franchise the Australian would play for in the IPL. In the past, he has turned out for the Mumbai Indians, the Delhi Daredevils (now Capitals) and twice with the Kings XI Punjab.

The key question for the Royal Challengers team management – comprising Kohli, Mike Hesson (team director) and Simon Katich (head coach) – would be whether they want to spend a large chunk of their purse on Maxwell in case rival teams enter into a bidding war, as was the case in past auctions, especially the smaller ones.

In 2013, Maxwell was the only IPL millionaire after being picked by Mumbai for US$ 1 million. The next most expenisve buy that year was Sri Lanka’s Ajantha Mendis at US$ 725,000.

“The Australian team is generally together for a one-day series somewhere in Australia and we get to watch it together and congratulate and commiserate each other depending on what they went for or if they didn’t go. So it’s stressful day for a lot of people, and I’ve been lucky to be on the good side of it a fair few times”

In 2018, the Daredevils released Maxwell, just a season after paying INR 9 crore (US$ 1.4 million approx then) for him. Maxwell opted out of the IPL to focus on the home season in Australia and the ODI World Cup, but that did not hurt Maxwell’s stocks much. In the 2020 auction, he ended up being the second-most expensive buy after the Kings XI paid INR 10.75 crore (US$1.514 million approx) for him.

Despite all the promise and potential, though, Maxwell struggled in the last IPL, which was played in the UAE, making just 108 runs and picking three wickets in 13 matches. It did not come as a surprise then, when the Kings XI released him. However, that did not stop Maxwell from listing his base price in the highest bracket of INR 2 crore (US$ 274,000 approx).

Maxwell said he has cherished every IPL experience – whether for Mumbai or for the Kings XI or at the Daredevils – and he was even elevated to the Kings XI captaincy in 2017, a season in which he smashed 310 runs at a strike rate of 173.

“I suppose to have the luck to go back there [for] most years has been awesome for my cricket,” he said. “It’s been great to have the experience of playing around the best players in the world and learn from different teams as well.

“We’ve had different coaches – Punter [Ricky Ponting at Capitals], Sanjay Bangar, [Virender] Sehwag [both at Kings XI] – and it’s been awesome. People ask me if my cricket would be different if I didn’t go for that [IPL], but I have no idea. But I don’t think it would because I don’t feel I’ve changed too much as a person.”

Maxwell is once again anticipating an “exciting” auction, which he will be following on Thursday in New Zealand with the rest of the Australia team-mates. “The Australian team is generally together for a one-day series somewhere in Australia and we get to watch it together and congratulate and commiserate each other depending on what they went for or if they didn’t go. So it’s stressful day for a lot of people, and I’ve been lucky to be on the good side of it a fair few times.”