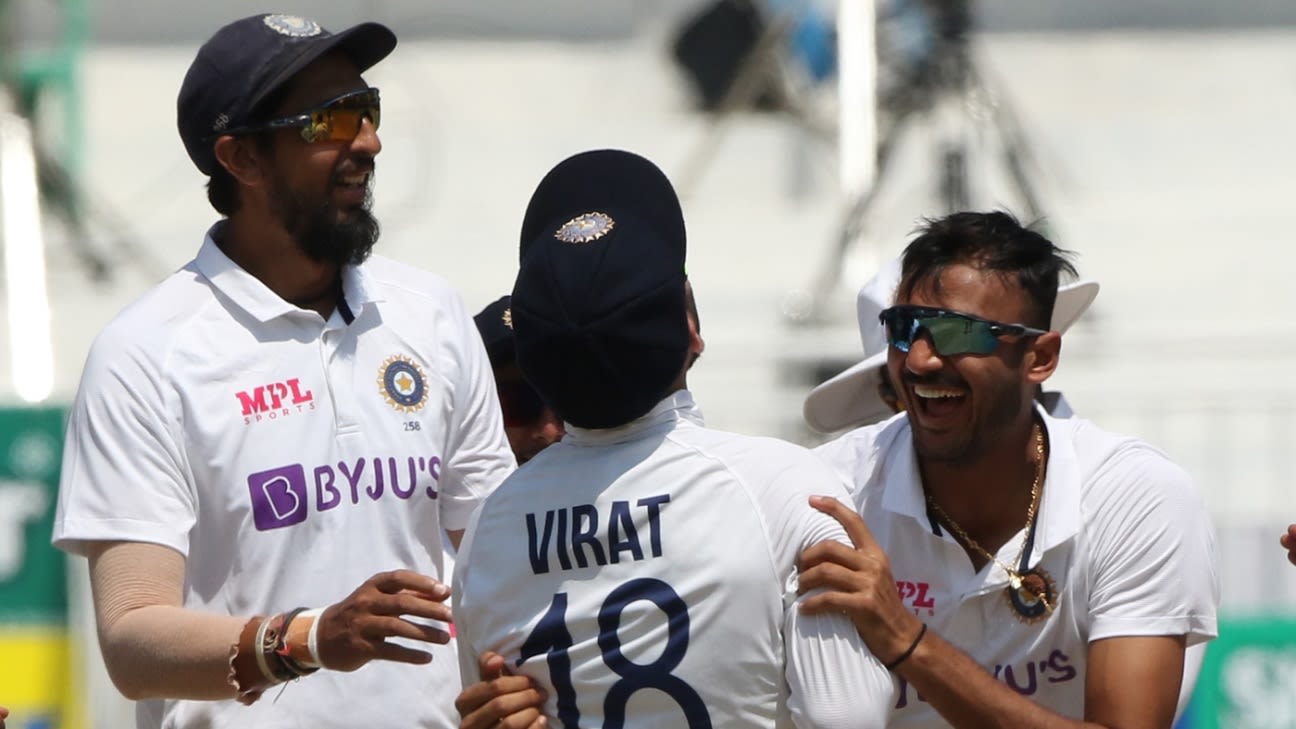 There was sharp turn, there was uneven bounce, and there were explosions of soil when the ball landed on its surface. As difficult as it was to bat on, though, Virat Kohli believes the pitch at the MA Chidambaram Stadium for the second Test was a fair one in terms of competitive balance between the teams. With plenty of help for the spinners right from day one, he felt the toss didn’t influence the result to the extent that it did in the first Test, for which the pitch began as a flat one and started crumbling from around the third day onwards. Here are excerpts from his interview at the post-match presentation after India wrapped up a series-levelling 317-run victory.

On the toss factor

I don’t think on this pitch it would have mattered so much, to be very honest with you, because if you looked at our second innings, on day three, we still applied ourselves, almost got 300 runs again. We believed that we could get runs on that pitch, and it wasn’t unfair if the toss went either way.

Both teams had to apply themselves, and that’s what you want in Test cricket, whether you’re playing on spinning tracks or on seaming tracks which have a lot of grass on it, both teams should be in the game from the first session onwards, and that was exactly the case on this pitch.

I think our application with the bat was outstanding in this game. The conditions were challenging for both sides, but we showed more application and grit and determination to battle it out, we didn’t panic out there, looking at the amount of turn and bounce on that pitch. We trusted our defence, and we got into the game, and we scored 600 [615] runs total in two innings combined, so if you put up that kind of a batting performance, and you string up those important partnerships, then we know that our bowlers are going to do the job in our home conditions, so yeah, it was the perfect game for us.

I’ve taken a lot of pride in improving myself very quickly, correcting mistakes, which probably I haven’t done in the past on a few occasions, I’ve been rigid. But now, if I make an error I make sure in the very next innings I iron it out, because I understand that I need to be batting out there as much as possible in the middle, and that partnership with [R] Ashwin was very important for us, almost 100 [96] runs, I think he batted outstandingly well. I just decided in the second [innings] that I’m not going to go after the runs too much, not get ahead of the game. I’m going to trust my defence, I can bat four sessions on this pitch, no problem at all, and I’m going to trust my defence to get me out of trouble.

“We believed that we could get runs on that pitch, and it wasn’t unfair if the toss went either way”

Kohli believes the Test wasn’t decided by a coin toss

He’s really worked hard in Australia. With a super-skilled batsman like him, you won’t really see the difference in batting, but when he moves with the gloves you can see that difference in his reactions and reflexes. He’s worked physically on himself a lot in Australia, he’s shed a lot of weight, and he’s become quicker on his feet, and it’s showing. The way he kept on this pitch with so much turn and bounce was a credit to him for working so hard, and we want him to keep improving as a keeper, get stronger and stronger with his skillsets, because we understand how much value he brings to the team.

On Axar Patel’s performance on debut, which included a second-innings five-for

It’s a special, special moment for him. Actually, he would have played the first game as well if he didn’t have that niggle, but yeah, he was very keen to step onto the field, and as a left-arm spinner, when you get that kind of a pitch where it’s turning square and he bowls so fast, he was just all smiles, he couldn’t wait to get the ball in his hands. Very very happy for him, hope he builds it up from here on, and has a very strong couple of games going forward, so he’s always in the mix to play Test cricket for India.

It was a bit strange in the first game, to be honest, playing at home without the crowd in the stands. Things were a little flat in the first couple of days, to be very honest – myself included, just didn’t pick up the energy in the field, and I think second innings onwards in the first game, we picked up our game, and we were on the money in terms of our body language and what we wanted to do on the field. But this game, I think the crowd makes a massive difference, when the fans are behind you, obviously you push more as a team, and this game was an example of that grit and determination we’ve shown as a side, and we continue to do that, and the fan support is a big, big part of that.

Chennai crowd, everyone knows they’re a very very intelligent crowd. They understand their cricket really well, so for me it’s sometimes [important to gee the crowd up], in moments of the game where a 15-20-minute period of the game which is important, where the bowler needs that support from the crowd, it’s my responsibility as a captain to involve everyone, bring everyone in, because if I’m running in to bowl in this heat, I want people to motivate me, and that motivation pushes you further to do special things.