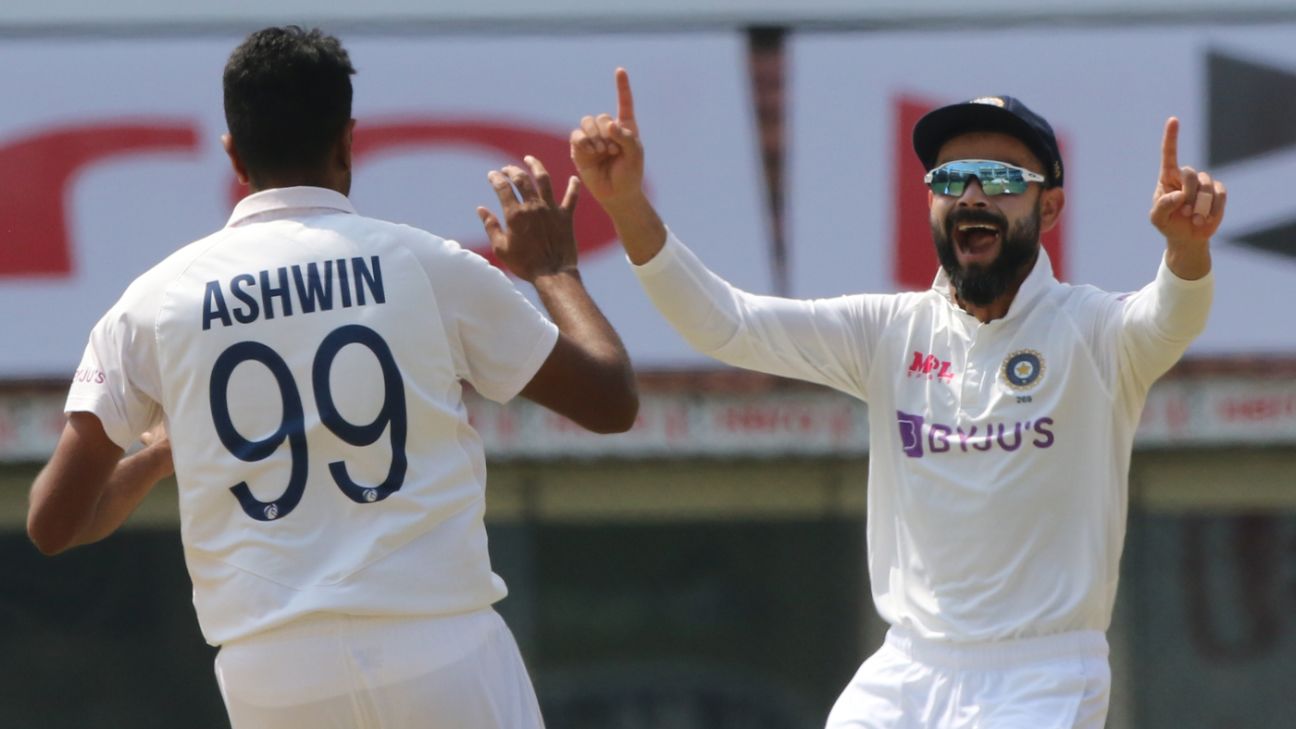 In this chat conducted by bcci.tv immediately after India’s series-levelling victory in the second Test against England in Chennai, Virat Kohli tells R Ashwin that he has seen a kind of metamorphosis in his lead spinner.

According to Kohli Ashwin, who is closing in fast on 400 Test wickets, has naturally been strike bowler, not just at home but also during India’s triumph in Australia recently. Ashwin explains to Kohli what has helped him reach a “balance” state of mind where he is not desperate.

Virat Kohli: I know you’ve done very well in Test cricket and you take a lot of pride in doing well for the team. This collective performance, which you’ve been working very hard for, coming in front of your home fans and your family as well, how does it feel?

R Ashwin: For the first time in my career, I feel blank. When I went out to bat [on Tuesday] as well [in the second innings of the second Test], I was blank when I came and asked you “can I start sweeping?”, “can I reverse sweep?”. So that’s exactly how I feel: zero feelings or emotions inside. Very rarely I find myself in such situations.

You know me very well, my mind is always ticking, but for a change it’s really, really blank. And out there, especially being 1-0 down, what I did was something incredible. Yes, I had things go my way, but that partnership (96 runs for the seventh wicket) between us set the tone and I’m really pleased for that.

Kohli: Before you came to Australia, I saw a different body language, different mindset. What did you change about your approach towards the game which changed the way you approached situations on the field, and which is making a massive difference, not just in India but in Australia as well. Guys [Australians] were really very nervous to take you on. To be very honest, that body language I’ve seen away from home from you after a very long time. So I wanted to know at this stage of your career, what did you do and how did you manage to do it?

Ashwin: The whole pandemic, where we shut off and locked ourselves down, it made me think “what is going to happen?”. For me, if you take the game away, I’m literally lost. Even if I’m not playing some formats of the game for the country, I’m putting the TV on, watching some preview, what’s happening, what’s not happening….I’m that sort of a person. Suddenly, the game’s not happening and we’re all sitting at home, so I was reflecting upon myself and trying to understand how I can learn from people, what people were perceiving of me.

That perception really made sure that I was playing a game that is completely different to who I was. In the past when I toured [overseas], there was more of a desperation trying to prove others wrong. But this time when I went out there, it was more about proving to myself what I’m capable of. One thing I’ve noticed from a distance, and when I see people who do well through the year is how balanced they are in terms of not wanting to be desperate. Jinks, yourself when you came back to England the second time and wanted to do well, but really within yourself, within your crease, within your space, which is something I wanted to embrace.

Kohli: We had a special partnership. The game was tentatively poised. Ash came out and changed the whole momentum of the game. That partnerships was special I want you to touch upon our partnership?

Ashwin: This didn’t happen today. It happened at Blacktown (Sydney, during the first practice match). We were practising, and I was looking on how to take the short ball. I was a trying to set a base, trying to pull, trying to give myself options when you came up to me and said, “Ash, your big strength is to watch the ball and hit it, and play your natural game.”

After that, when I went into the Adelaide day-night game, I sort of hit a few balls off the middle and something started to click. I said [to myself], ‘I’ve been too worried about technically getting things right. I’m just going to watch the ball and give myself space and also time, that extra bit of time to react to what’s in front of me.

For me that had been missing in the whole puzzle of wanting to be excellent. Even this game, I’m sure you’ve been noticing, about how we wanted to sweep, try and be a little proactive. So (when) I walked out there (second innings) the first question I asked you was: “I want to try and sweep, what do you think?” And you just said “just go ahead”. For instance, if you had told me “thoda time lele, dekh le (take some time),” then things might have been different, because for me the right trigger has always helped. That’s what I have noticed in the last year or so.