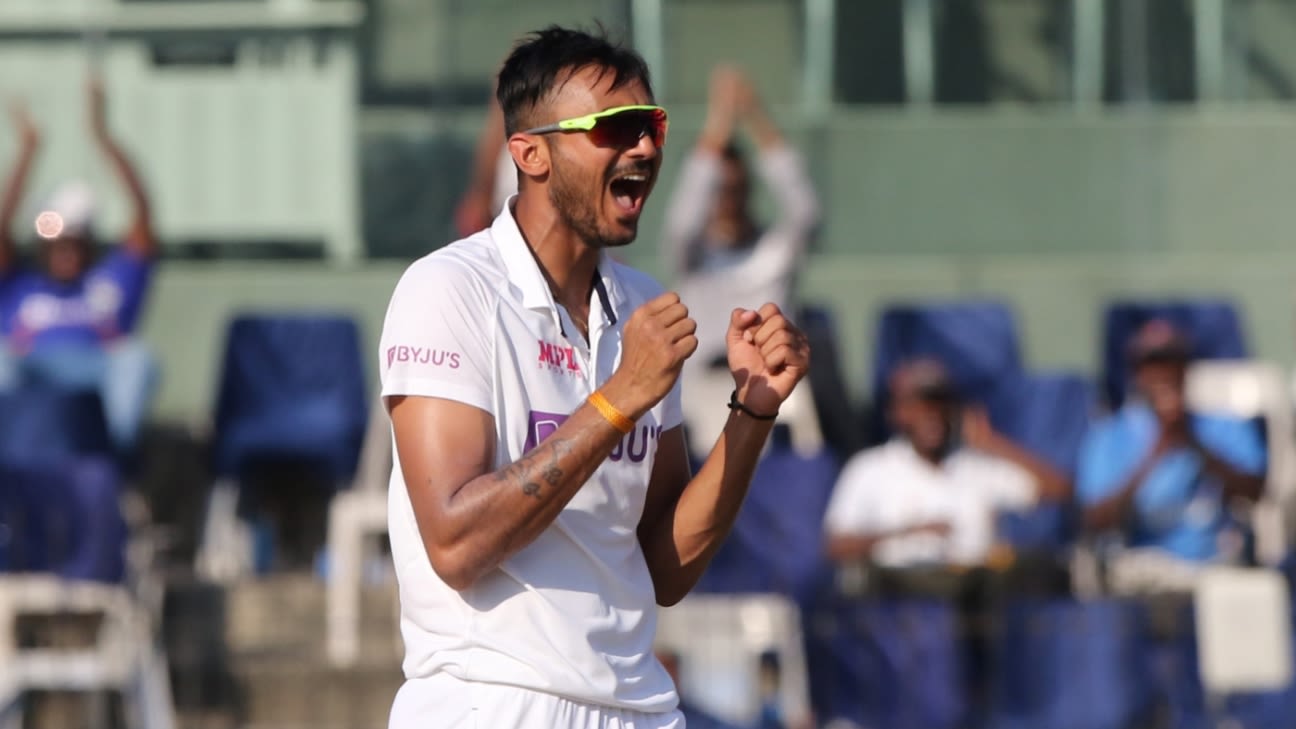 Welcome to day four of our live report of the second India-England Test from Chennai. Join us for updates, analysis and colour. You can find our traditional ball-by-ball commentary here

*Most recent entry will appear at the top, please refresh your page for the latest updates. All times are local

India cruised to victory in a little over a session on the fourth day at Chepauk, Axar Patel collecting a five-wicket haul on debut as England went down by a crushing margin of 317 runs – emphatic retribution after the tourists had gone 1-0 up on this ground less than a week earlier.

Having seen his side dominate the match from toss to finishing tape, Virat Kohli’s satisfaction was as palpable at his disgruntlement after the first Test. On a classically subcontinental surface, England twice could barely match the individual contribution of India’s first-innings centurion, Rohit Sharma, and were left with precious few scraps with which to slink off to Ahmedabad ahead of the day-night encounter.

The only slight regret for another enthusiastic crowd came in the absence of a R Ashwin landmark for them to acknowledge – he finished with match figures of 8 for 96, narrowly short of becoming only the fourth man to score a century and take ten-for in a Test.

Not even Sheffield steel will do the job here, as Joe Root falls to Axar Patel for the second time in the match – a ripping delivery that prances to hit the top glove with Root propping forwards. England’s captain tarries a while, looking at the pitch and grinning, knowing he hasn’t done too much wrong there. But he has to depart for 33, top score in the innings so far (although it won’t stop his Test average slipping below 50 again). This is, or was, England under Root, oscillating wildly from success to failure, and their winning run on the road is about to come to a juddering halt in Chennai. India two wickets away.

England 134 and 116 for 7 (Root 33*) need a further 366 runs to be India 329 and 286
India pocketed four wickets in the morning session as they look to round up England’s remaining batsman and move level in the series. R Ashwin claimed two of them, to move within sight of a ten-wicket match haul to go with his hundred, as only Joe Root managed an extended stay at the crease.

To the delight of the Chepauk crowd, Ashwin struck with his first ball as Dan Lawrence gave him the charge and was nutmegged, Rishabh Pant pulling off a difficult leg-side stumping. Ashwin then tied down Ben Stokes for 38 balls of near-strokeless trench warfare, before finally having him caught at slip via an inside edge – the tenth time has dismissed England’s allrounder in Tests.

Axar Patel returned to immediate success later in the session, as Ollie Pope sent a slog-sweep straight to deep midwicket, and although Mohammed Siraj dropped Root, the underused Kuldeep Yadav finally found a moment to enjoy as Ben Foakes miscued another sweep for Yadav’s first Test wicket since the SCG 2019.

Sidharth Monga writes: Amid the festival-like atmosphere in Chennai, one man will be slightly concerned. Hailed not long ago as India’s No. 1 overseas spinner, Kuldeep Yadav is playing his first Test in over two years. Over recent months, there have been several times when you would have thought he will get a game, but the team combinations have demanded either a better batsman or a spinner taking the ball the other way. And now that he has got a game, he has not yet taken a wicket out of the 16 that have fallen. He got just six overs in the first innings, and it took until the 43rd for him to be introduced in the second.

On the sidelines, Washington Sundar has been practising with the pink ball. There might be cause to reinforce the lower-order batting come the day-night Test. Kuldeep will hate to go back to having to wait for his next chance. With the remaining four wickets, it will be great if he can show the team management evidence of his utility. And just then, Mohammed Siraj drops what could have been Kuldeep’s first Test wicket in two years. That’s how luck rolls at times.

Mohammed Siraj drops Joe Root on 32… perhaps because he knows Root needs to get to 37 to keep his average above 50, and doesn’t want to open up the whole Fab Four debate once again #IndvEng

Axar Patel has switched ends and replaced Ashwin, after a spell of 9-4-14-2, and picks up a wicket almost straight away as Ollie Pope sends an ill-conceived slog-sweep to deep midwicket. India have brought on Kuldeep Yadav at the other end, and even though it looks as if England might make it to lunch, India are closing in.

Rishabh Pant was on the receiving end of a smart bit of work behind the stumps by Ben Foakes yesterday, but produced almost a carbon copy to dismiss Dan Lawrence this morning. Say what you like about the pitch, but it’s provided the stage for some fantastic keeping.

Well, that is a pretty comprehensive working over. Ben Stokes has departed for 8 off 51, as un-Stokesian an innings as you can imagine, and that is pretty much all down to one man – that man – who is heading ever more certainly towards a ten-for to go with his hundred. R Ashwin bowled 38 deliveries to Stokes, with 35 dots before finally picking up the big W. Shake of the head from the batsman as he trudged off, but no doubt about the thick inside edge on to pad before the ball squirted out towards slip. Tenth time he’s succumbed to Ashwin… and he could end up facing him in as many as seven more Tests this year. *Gulp*

Just three runs conceded in five overs from R Ashwin so far this morning – and it’s been all about the battle with Ben Stokes, who has faced all but three balls from the offspinner. Ashwin is tinkering away, switching from round to over the wicket, testing the batsman with changes of pace and angle of attack. A good contest, in other words. Patel has not quite had the same control, with both batsmen sweeping him, and Ishant Sharma is now on for a burst.

England’s two best batsmen, the only members of the top six with previous experience in India, are currently trying to save a bit of face for their side. Root has started to find his range with the sweep again, while Stokes is trying to work out how best to manage the threat of Ashwin into the rough outside his off stump.

Before the start of play, England’s batting consultant on this tour and a man who was adept at finding his way whatever the conditions, Jonathan Trott, spoke to the host broadcaster.

“It’s up to each individual player. They’ll all have worked hard on their options against spin. There are good seamers as well in the India side. They’ve got to work as a pair, rotate the strike, picking up length quickly, move feet and back options. [Method for defence] depends on their contact points. Whether that’s using their feet or getting right back on their stumps. We’ve seen how people who have scored runs have gone about it.

[Toughest conditions for England to face?] “I think so. This wicket is a bit tricky; the last wicket was a bit tricky as well and we scored runs on it. The guys will be confident.”

All sorts going on here… Dan Lawrence is the man to depart, done by Ashwin for the second time in the match, and it’s thanks to another fine bit of glovework in this Test. Rishabh Pant’s wicketkeeping has largely been patronised, given it’s his ability with the bat that has got him in the side, but this was a fantastic bit of work, taking the ball down the leg side after Lawrence had been nutmegged on the charge, and then stretching to break the bails as his feet went from under him. Lawrence leapt for his ground but couldn’t get back, and heads off disappointed once again: that might be his last on-field act of the tour. India one seventh of the way there, as Stokes walks out into Ashwin’s crosshairs.

Virat Kohli has started off with Mohammed Siraj, who’s had an eventful Test despite initial speculation that he was going to get a “Thanks for coming” in the manner of Adil Rashid at Lord’s in 2018, and Axar Patel this morning, keeping the Chepauk crowd waiting in their hopes for more Ashwin heroics. You can bet he’ll be on once Ben Stokes walks in… and with Patel starting right on the money to Root, who knows, that might be fairly soon.

Is Ashwin a better allrounder than Stokes?

Hello and welcome to the last knockings. India have dominated proceedings in the Chennai rematch and after three days stand on the verge of a series-levelling victory – in Mortal Kombat fashion, it’s time to finish their opponent off. Can England produce a show of character in the teeth of certain defeat? Has Joe Root got parting shot innings in him? Will R Ashwin get four more wickets to walk off the pitch and into a very special club? We will find out soon enough.

ECB receive £400 million bid for private equity stake in the Hundred
Liam Livingstone to make England Test debut against Pakistan
Milne, Mitchell lead from the front to bowl India out for 219 in series decider
Kraigg Brathwaite wants West Indies ‘to bat 100 overs’ as fiery Perth surface beckons
Kotak, Cooley and Dilip put in charge of India A in Bangladesh