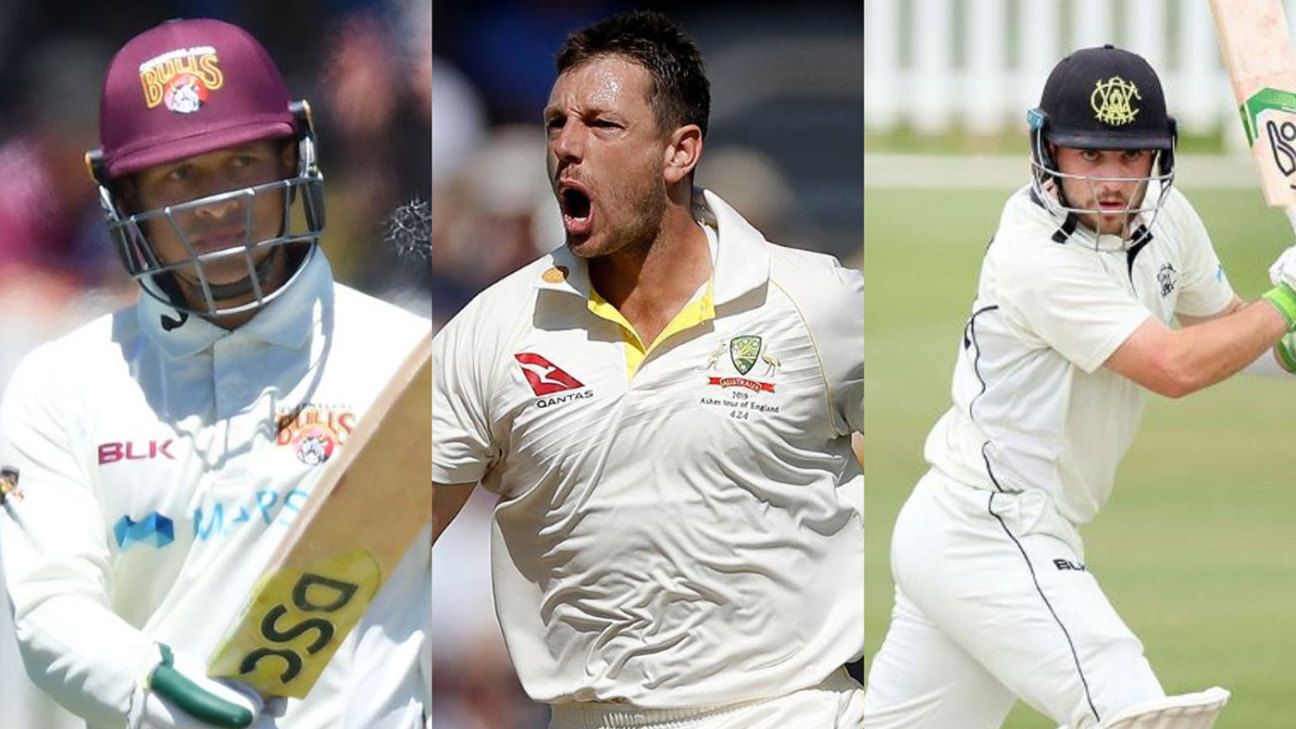 The Sheffield Shield resumes on Wednesday with the Australia Test squad available to play the remainder of the season, barring any injury issues, after the Test tour to South Africa was postponed. Cameron Green and Will Pucovski played their way into the Test team during the first half of the Shield season in Adelaide. Here are six players to watch during the second half of the season as Australia look towards the Ashes next summer.

The 34-year-old is the forgotten man of Australian cricket. Despite his impressive record in all formats he somehow couldn’t find a place among the 37 Australian players selected for the two touring parties to South Africa and New Zealand in the Test and T20 formats, but it was revealed he was on standby for the South Africa tour. Australia have holes to fill in the Test top six and Shield runs could yet put him back in contention. He has a Shield century already this season against South Australia. Queensland sit top of the table with five games to go and the captain may have 10 chances plus a final to add to his tally and put himself back in the Ashes frame.

Henriques is playing the best cricket of his career and with Matthew Wade’s axing, he was firmly in the mix to fill the vacant No. 5 role in South Africa, along with Travis Head. Henriques hasn’t played Test cricket since 2016 and has never played a Test at home. His overall first-class record does not reflect how well he has played in the last four years. Since his last Test match appearance, he has averaged 42.57 and made eight centuries but in the last two Shield seasons he has averaged 51.70 and made four centuries in 20 innings, including two at the start of this Shield season in the Adelaide hub. He has just turned 34, but with Green and Pucovski already in the Test squad, there is less of an urge to promote youth at the expense of the best options. More centuries in the second half of the Shield season could put him firmly in the Ashes frame.

Carey’s selection on the South Africa Test tour as the back-up wicketkeeper to Tim Paine, instead of going to New Zealand with the T20 squad, made it clear where the Australian selectors have placed him on their priority list. Wade’s axing from the Test side does present a slot in the middle order. Carey playing as a specialist batsman in the Test team may appear far-fetched given his overall first-class record, but his performances with the bat at international level, particularly in the 2019 World Cup, and his recent first-class form paints a different picture. Since the 2019 World Cup he has played just 12 first-class innings for Sussex, South Australia, and Australia A but in all bar one innings he has batted in the top six making 601 runs at 54.63 including two centuries and four half-centuries. Barring injury, it will also be the first time Carey has had the chance to play four consecutive Shield matches since 2017.

There is a watching brief on Inglis among some very senior and well-respected judges in Australian cricket. The 25-year-old has turned heads in recent times, particularly with his form in the BBL in a new and difficult middle-order role. He is also fast becoming one of Australia’s best players of spin. He had an excellent start to the Shield season plundering 354 runs at 118, including his first two first-class centuries and a half-century. His glovework is highly rated. While Carey appears the current favourite to assume Paine’s role whenever the Test captain finishes up, Inglis can force some fierce debate among the selectors with a big second half to the season.

It hasn’t gone unnoticed that Pattinson’s presence in a rotating bowling attack coincided with the retention of the Ashes in the five-Test series in 2019, while his absence from the Test squad through a bizarre injury this summer saw Australia stick with the same three fast bowlers in the four-Test series loss India. Pattinson has played just one first-class match, against India A, since January 2020 after missing the first half of the Shield season due to the IPL. The Australian selectors would love to see him bowl well in the second half of the Shield season to shore up their options for next summer’s five-Test Ashes series, where bowling depth may be critical to retaining the urn.

Queensland’s legspinner started the season in a blaze of glory taking 23 wickets in three games including three five-wicket hauls and he has established himself as Australia’s second-choice Test spinner behind Nathan Lyon. Green’s presence in the Australia Test XI does create an opening for Swepson. Provided Green’s bowling improves and his body can handle an increased workload, Swepson and Lyon could potentially play in the same team during the Ashes if conditions suited although a twin role is more likely later in 2022 when Australia are due to play eight Test matches on the subcontinent. Swepson has the chance to prove his case as Queensland get to play at least five games on a host of different surfaces. With those games left, and potentially a final as well, he also has the chance to become the first spinner since Jon Holland in 2016-17 take 50 wickets in a Shield season, something only five spinners have done in the history of the competition. However, an untimely neck injury has ruled him out of the first game back against Tasmania with an unknown timeframe for a return.