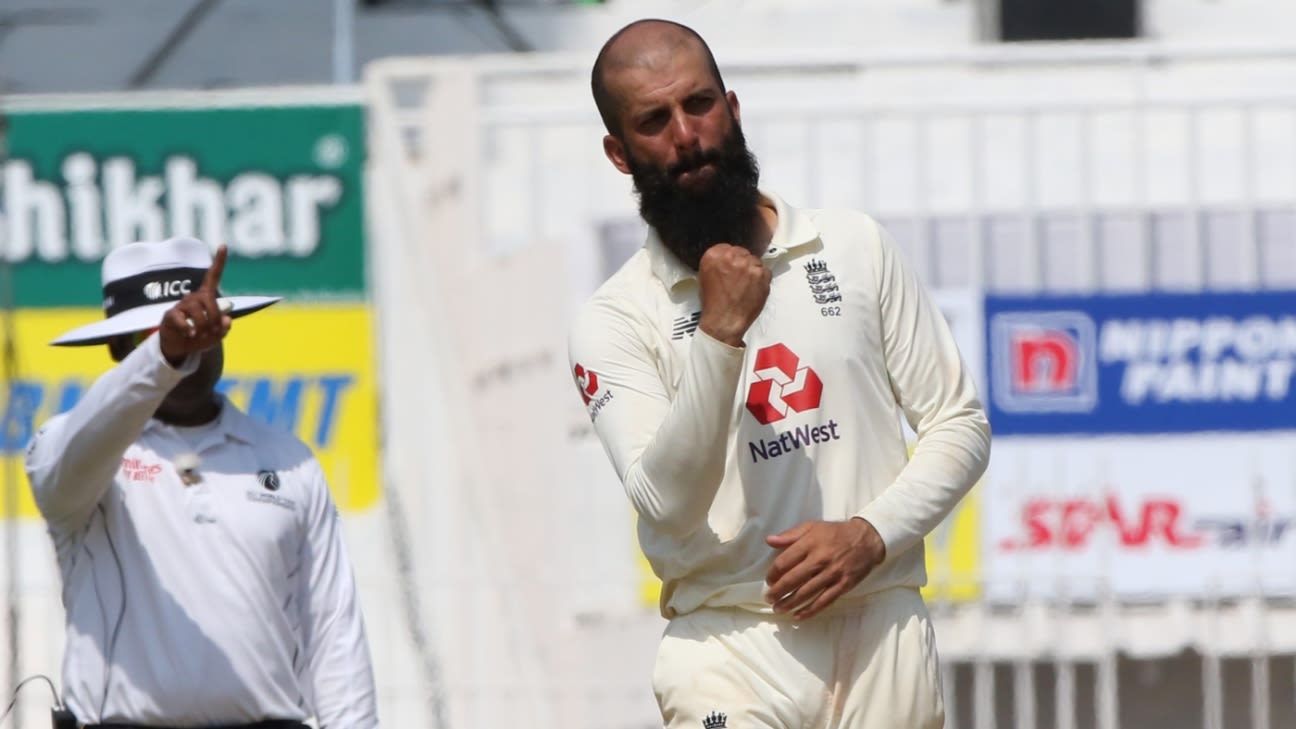 Joe Root has confirmed that Moeen Ali is to leave England’s Test tour of India.

While Moeen is expected to return for the white-ball section of the tour, he will not be available for the final two Tests of the series.

The news is a significant blow to England. Not only did Moeen take eight wickets in the second Test, he also top-scored in England’s second innings.

The timing is not ideal, either. While England had promised their all-format players a break from the bio-bubble at some stage, Moeen had just returned to the Test team – this was his first game for 18 months – after contracting Covid-19 at the start of the Sri Lanka tour, a development that caused him to spend two weeks in quarantine and miss out on selection for that leg.

In the Chennai Test, Moeen bowled with increasing control as the match progressed. In his place, England are likely to turn to Dom Bess, whose confidence might have been compromised having been dropped after the first match of the series.

“Moeen’s chosen to go home,” Root confirmed after the Test. “Obviously it’s been a very tricky tour for him, and as mentioned at the start [of the tour], if players feel they need to get out of the bubble, then that’s been an option and it’s important that we stand by that.

“From the squad, Moeen is the only one going home,” he added. “It wasn’t about asking him if he wanted to stay, it was a decision that he chose. Of course we want as many players to stay available as long as possible, but we also want them to be comfortable here. He wants to be at home with his family and we respect and understand that.

“It’s been a very difficult tour for him, having to deal with Covid and being in his room for such long periods of time. You come to a point where you want to get out of the bubble and that’s absolutely fair. I’m sure it wasn’t an easy decision for him, but it’s one that we respect.”

While Moeen was released by his previous IPL team, RCB, he is hopeful of being picked up by another team in the auction later this week. If he is, it would have left him facing the prospect of around five months away from home in one stretch had he not taken a break now. Moeen has two young children.

Asked whether Moeen’s decision to head home implied that others in the squad – notably Jos Buttler, Jonny Bairstow and Mark Wood – could have chosen to stay rather that take breaks from the environment, Root insisted the situation “wasn’t as straightforward as that”.

“There’s a lot of things that come into it,” he said. “it’s a very difficult thing to pin onto one individual. I’m sure there were different conversations with different players, because everyone’s in slightly different positions in squads, and I’m not privy to those conversations.”

At the age of 33, and having opted out of Test cricket from the first Test of the 2019 Ashes until his recall this winter, it is not out of the question that this may have been Moeen’s final appearance in red-ball cricket. Root, however, insisted that his performance in the match was enough proof that he still has plenty to give at Test level.

“Why would it be his last Test match?” he said. “I thought he got better as the game went on and showed everyone he’s got the skills to perform at this level. Just because he’s not going to take further part out here, I don’t see why that [should be the case].”

Steve Waugh: ‘The public has almost overdosed on cricket’
Rawalpindi Test between Pakistan and England to begin as scheduled
James Anderson feels the rare thrill of the unknown ahead of Pakistan Test bow
Charith Asalanka Stars As Sri Lanka Clinch Thriller To Level ODI Series
Hurraira 221, centuries from Amin and Waheed give Northern total control