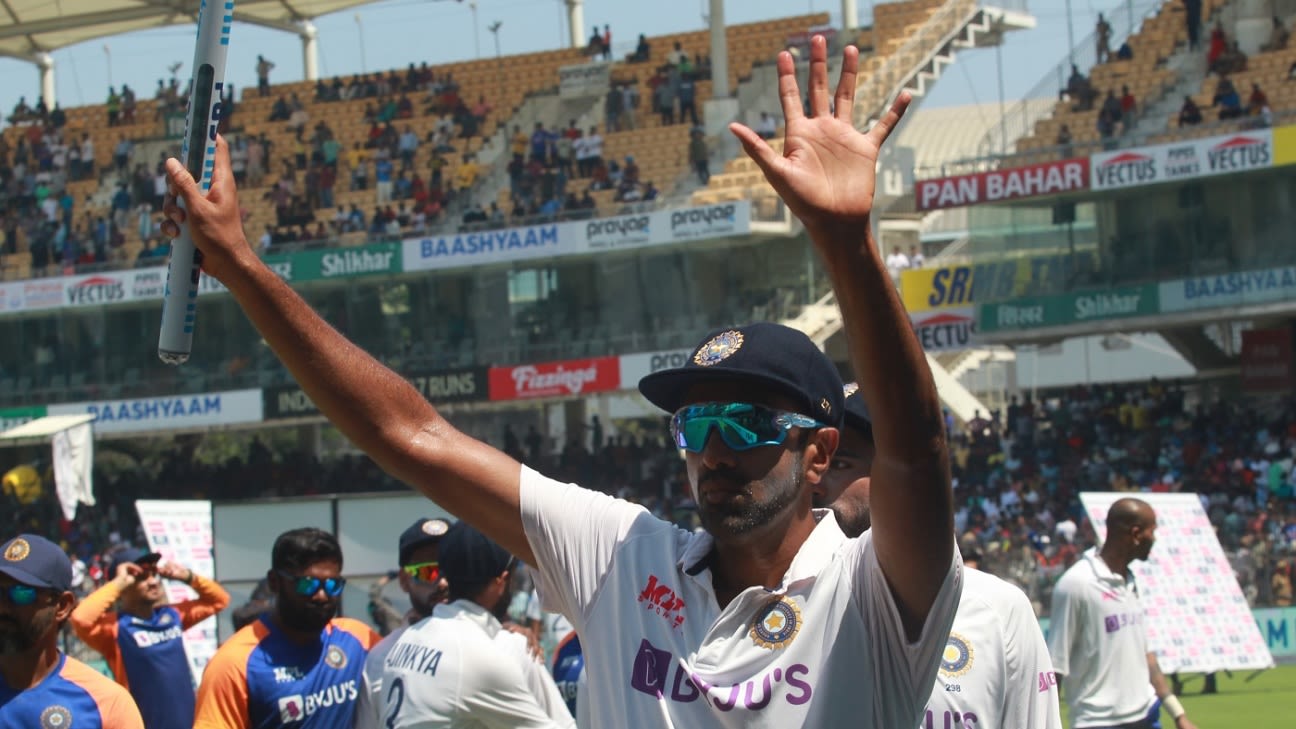 R Ashwin said he felt like a “hero” whenever he bowled – or just removed his cap for that matter – in front of his home crowd during the second Test against England at MA Chidambaram Stadium in Chennai.

Ashwin, who starred in India’s win – eight wickets and a century in very challenging conditions in the second innings – dedicated his “most special” Test performance to the crowd: the stadium had allowed spectators at 50% capacity for the game.

“When I was young I’ve wondered if I would ever play on this ground and if people would turn out and clap for me,” Ashwin told the host broadcaster after India’s series-levelling win. “I’ve played here as an eight-nine year-old. I’ve watched matches from these stands, my dad would get me here for most of the games.

“I’m speechless right now. I’ve played four Tests matches here and this is easily the most special Test match. It gave me a hero feeling.

“Every time I bowled or removed my cap there was a different feeling [because of the cheers]. During Covid times when there’s hardly any cricket, the knowledgeable Chennai crowd came in large numbers without worrying. I dedicate this win to the Chennai crowd. We went one-up after they allowed the crowd, hopefully we continue to do well [in the presence of crowds] in Ahmedabad as well.”

After picking up a five-for to restrict England to 134, Ashwin hit a 148-ball 106 in the second innings, stretching India’s lead to a challenging 482, and then returned 3 for 53 in the final innings to help bowl England out for 164. In the process, Ashwin moved to second on the list of players to have scored a century and take a five-for in the same Test, having done it for the third time, and is only behind Ian Botham, who achieved it five times in his career. The latest five-for also took Ashwin past James Anderson to No. 4 on the list of players with most five-wicket hauls at home.

While the spinning Chennai pitch earned criticism from former players such as Michael Vaughan and Mark Waugh, Ashwin, while admitting that the surface behaved very different to how it did during the first Test – also played in Chennai – said that it was the Indian spinners’ mental ability that gave them the edge this time, and not just the pitch.

“This wicket is very different to what we played in the first game,” he acknowledged. “That [in the first Test] was a red soil wicket and this is a clay wicket. As much as it looked bad from the top, many people were predicting a lot of things – those balls weren’t the one that got the wicket.

“It was the mind that was actually getting the wickets. We had to play in the minds of the batsmen to get the wicket. It’s easier to say ‘go out there, bowl and get wickets’ but it’s not as easy as it looks because I’ve been playing here for years now. It takes a certain amount of pace and guile to be able to do it.”

Williamson: Guptill will be missed but he has not retired
New Zealand pick Bracewell and bowl; India bring in Hooda for Samson
Both teams unchanged as Afghanistan opt to bat
Kotak, Cooley and Dilip put in charge of India A in Bangladesh
Matt Renshaw, Marcus Harris lead PM’s XI with the bat, before West Indies fight back