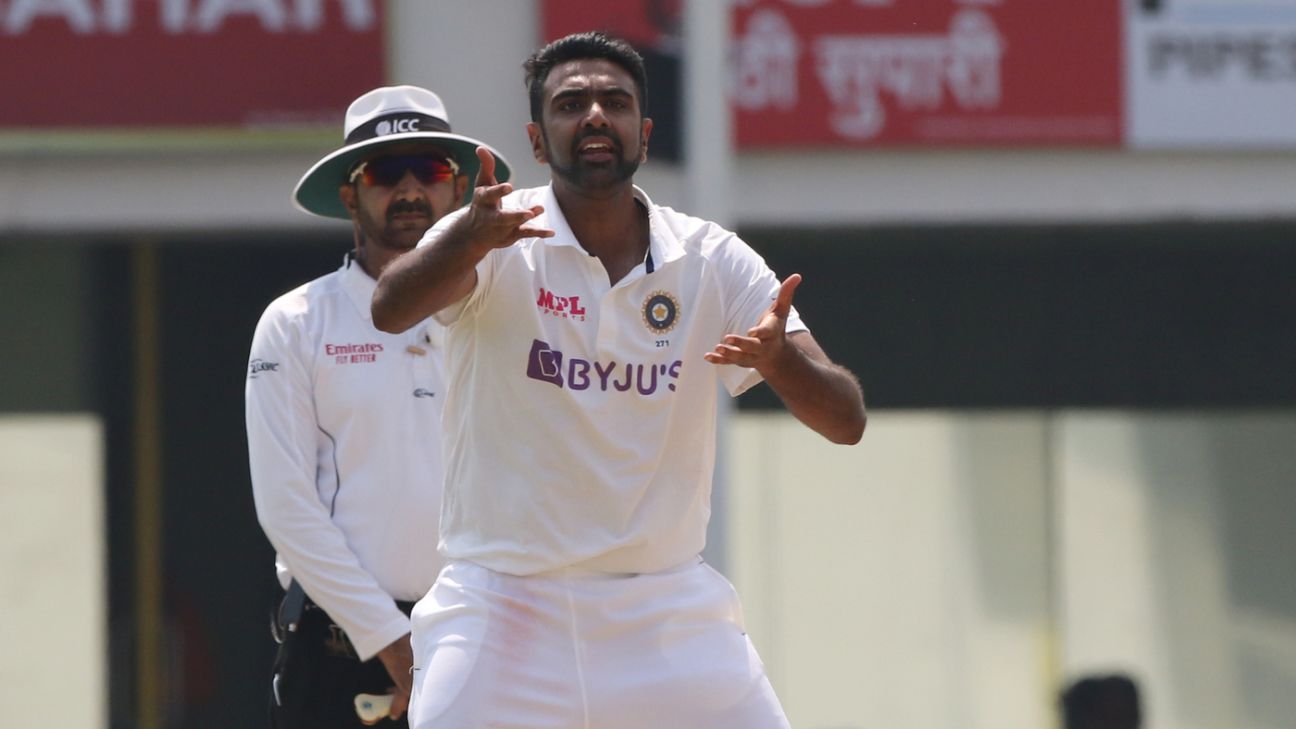 Having played 76 largely successful Tests, R Ashwin is now at a stage of his career where every achievement takes him to a milestone. During the second day’s play in Chennai, he took his 29th five-for, going level at the seventh position overall with Glenn McGrath. It was fitting that during a conversation around a DRS review caught on the stump mic, Ashwin showed McGrath-like memory of his wickets, telling Virat Kohli to go for the review because he had got the batsman out in a similar fashion after a DRS review in the Mohali Test back in 2016. This time, though, the bounce in the Chennai pitch had the ball sailing over, but McGrath would be proud of the memory displayed by Ashwin.

When Ashwin did get the said batsman, Ben Stokes, eventually, he brought up two more milestones: the 200th wicket of a left-hand batsman (he is already ahead of any bowler on that count) and his 266th wicket in India, taking him past Harbhajan Singh’s 265. He is only behind Anil Kumble now. For a man who remembers wickets and numbers well, he didn’t know of this one. At any rate it is special because when Ashwin was trying to make a career for himself as a batsman, Harbhajan had that memorable 2000-01 Australia series, leaving the youngster in awe. The grand finale of that series came at the same ground.

“When I watched the 2000-01 series, when Bhajju Pa played, I didn’t even imagine I would go on to become an offspinner for my country,” Ashwin said. “I was still a batsman for my state. Trying to accelerate a cricket towards batting and playing for my country. I wasn’t even sure I would go on to become a player for the Indian team. Lot of my team-mates from that age, from that generation, used to make fun of me because in my action I used to try to bowl like Bhajju Pa. From there on to come on and go past him has to be incredibly special. I didn’t know of it. Now that I know of it, I am incredibly happy. Sorry, Bhajju Pa.”

For the wickets of the left-hand batsmen, Ashwin credits his use of the crease and the seam position. This was a classic Ashwin wicket against a left-hand batsman: drifting in, dipping, creating a gap between where Stokes expected it to land and where it did, and then turning past the outside edge to knock back the off stump. However, it could also be argued this was still a full ball and Stokes should really have covered this.

Those arguments aside, Ashwin getting excellent batsmen bowled past the outside edge is a highlight reel on its own. His twin dismissals of Alastair Cook in Birmingham will top any list and were unequivocal classics. Then add to this offbreak the threat of his change of angles and parallel seam to give the ball every chance to go straight on and trap a batsman lbw.

“I can’t really remember how it all started,” Ashwin said. “Obviously the ball turning away from the left-hander is one very big advantage when it comes to offspinners. Likewise left-arm orthodox spinners enjoy bowling to right-hand batsmen. To me over the years, left-hand batsmen have tended to receive a lot of bowling from round the stumps. One thing I have learned and got better at is varying the seam position, the point where I use the crease, going wide on the box or as close as possible. Also change over the stumps. That is one angle I have used effectively recently.”

This five-for also took Ashwin past James Anderson to No. 4 on the list of most five-wicket hauls at home. And it came at a place that is closest home, just a middle-distance from him actual home. “It’s wonderful to have a crowd back,” Ashwin said. “The Indian fans must have been waiting to get back, especially when cricket is one of the bigger sports here. Playing in front of my home crowd is always special for me. And to get five wickets here is something I would always cherish. In front of the crowd is even better.”