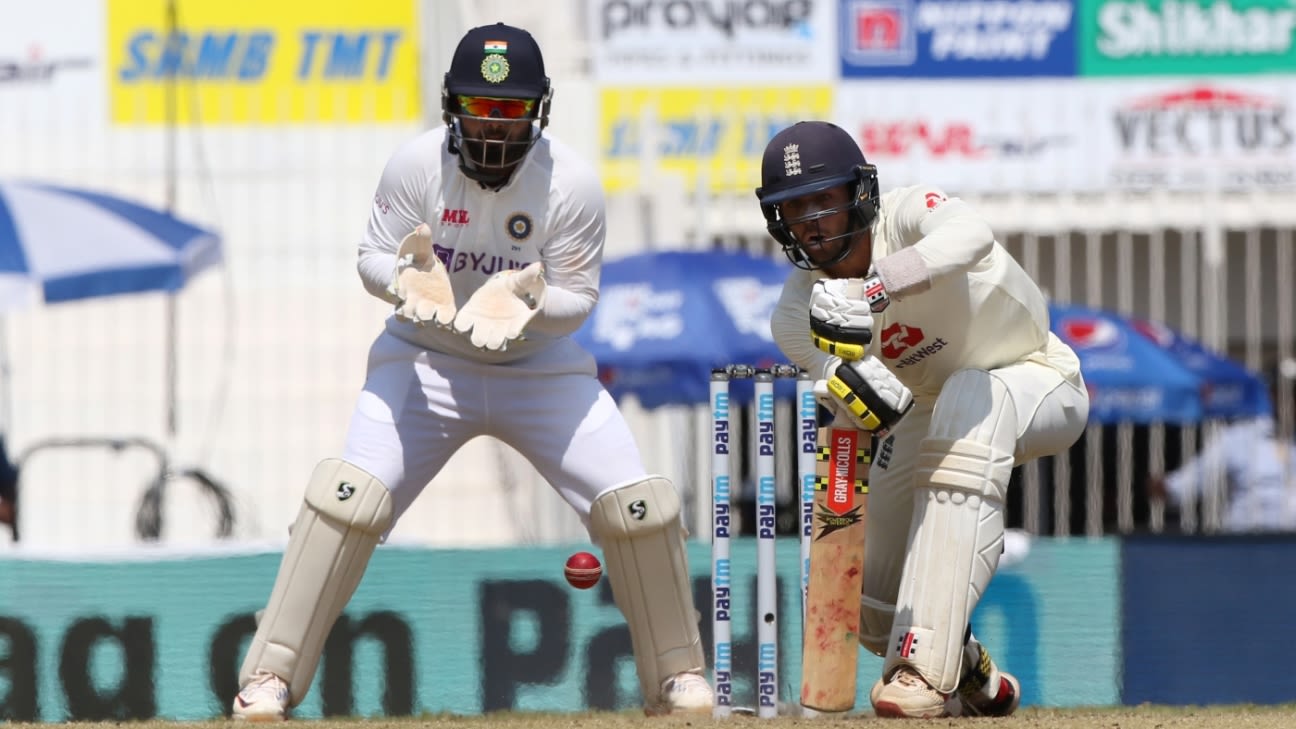 Ben Foakes said that conditions in Chennai were “obviously extremely tough, and probably not going to get any easier” after keeping wicket for 113.5 overs and batting for nearly two hours across the first two days of England’s second Test against India.

With Jos Buttler at home in the UK as part of the ECB’s rotation policy for multi-format players, Foakes has been backed by England to keep wicket in the final three Tests of this series, and took his chance in India’s first innings with an accomplished display with the gloves: England did not concede a single extra, while Foakes took two catches off Olly Stone’s bowling and completed a stumping off Moeen Ali.

He then performed creditably with the bat, compiling an unbeaten 42 from No. 7 after coming in at 52 for 5 to drag England up to 134 all out, though his keeping was less polished at the start of India’s second innings, as he missed a stumping chance off Moeen’s bowling to dismiss Rohit Sharma and also conceded five byes.

“It was extremely difficult,” Foakes told the host broadcaster, Star Sports. “Obviously they [India] are a pretty high-quality spin outfit and the pitch was playing a few tricks, so all in all it was a really tough day. We have just got to try to apply ourselves [in the] second innings.

“It’s obviously extremely tough and it’s probably not going to get any easier. Balls are going to spit past us, balls are going to keep low, and so we have to play within our own gameplans, our own limits, and try to put pressure on the bowlers where we can but also back our defence, too.”

Foakes highlighted the lack of any moisture in the surface, which he suggested had made the pitch particularly difficult to bat on.

“I think it’s just spitting so much,” he said. “It’s obviously so dry on the top that a lot of balls are taking the top and really turning, and then you’re getting the odd ball shoot low as well. All in all, it’s quite a difficult pitch to bat on.

“I was just trying to play for the ball that wasn’t going to rag, try to play within my limits, and play the ball late, basically – not get too far outside my bubble.

“Because the ball is taking the top of the surface, it’s spitting quite a lot, so it was almost [a case of] accepting that if one hit me on the glove or something then it was fair enough. Otherwise, I just tried to stick to my gameplan as if it was a normal sort of wicket and react if possible.”

R Ashwin, who took 5 for 43 to help roll through England in their second innings, said that batsmen needed to be “very patient” on the Chepauk surface, but suggested that the pitch was no more challenging than one which would offer bounce and carry for fast bowlers.

“I think it’s about being very patient, like when you play on a seaming wicket,” Ashwin said. “You have to dive through the initial phase, and get over it and then put runs on the board. When it comes to spin, unfortunately people don’t expect… they want conditions in their favour, driving, cutting, everything needs to happen. But when it comes to a seaming wicket, you can’t do all those things when you start playing on that kind of a wicket in the morning. The same benchmark needs to be set when you play spin on a challenging wicket as well.

“I do not know if they [England] have complaints. If they do, it is quite natural for people to come up against adverse conditions and then feel taken aback by it. In all honesty, the seven days of cricket that they have played so far, they have played really well, competed really well. I haven’t seen any of them complaining or anything like that.

“The only comparison I can say is if the ball is moving around 140-145 clicks off the deck, that has to be more challenging than somebody bowling at 85-90. Clearly, the challenges are way greater when you come up against seam.”

“But time and again there are conditions that will challenge, be it spin or seam. The only comparison I can say is if the ball is moving around 140-145 clicks [kph] off the deck, that has to be more challenging than somebody bowling at 85-90. Clearly, the challenges are way greater when you come up against seam. Just the same way when you come up against spin, you have to give it to the bowler, bide your time, and then probably cash in a little later. It is another art. As simple as that.”

Graham Thorpe, England’s assistant coach, said that the toss had been an important factor – as it had been in the first Test of the series – and played down any concerns about umpiring. Rohit Sharma survived a review for lbw in the final half-hour after a ball from Moeen struck him outside the line and would have hit middle stump. Umpire Virender Sharma’s ‘not out’ decision was upheld after he had judged that Rohit had attempted to play a shot, despite appearing to hide his bat behind his front pad, which left Joe Root visibly frustrated.

“It’s incredibly challenging on that surface on day two,” Thorpe said. “They’re a very skilled spin attack in their own conditions and it was a very good toss to win. Even in the first Test, we believed it was a good toss to win. I think this was just as important. We know that pitches deteriorate here as the game goes on, and this one has gone a little bit quicker.