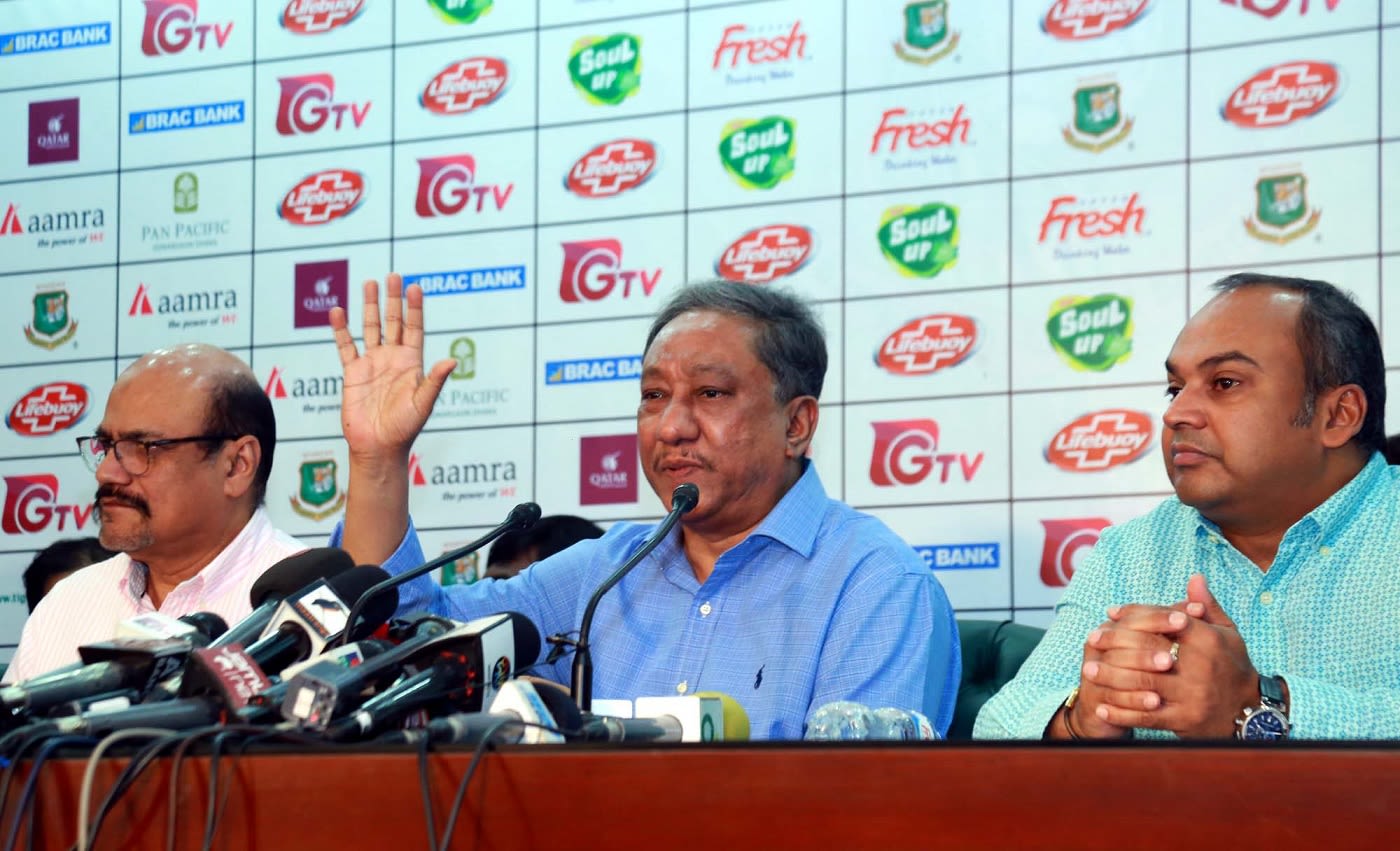 Mominul Haque knows that winning and losing a game for Bangladesh produces two very different types of reactions. It was all very calm when Bangladesh beat Zimbabwe last year, but after West Indies blanked them 2-0 in their backyard, he knew “a lot of things won’t be in your favour and a lot of things will come out”.

One of those is a public tongue-lashing from Nazmul Hassan, the BCB president, shortly after the 17-run defeat against West Indies in Dhaka. Previous captains have endured such dressing downs, in both public and private, and this was no different. Hassan slammed the captain and coach for the decisions they took, one of which was the selection of Soumya Sarkar from outside the squad, to replace the injured Shakib Al Hasan.

Hassan, who often gets involved in the minutiae of running the Bangladesh team, said that Sarkar was his fourth choice.

“When Shakib was injured, I had [board directors] Akram [Khan], [Khaled Mahmud] Sujon, [Ismail Haider] Mallick, [chief selector Minhajul Abedin] Nannu and [selector Habibul Bashar] Sumon in front of me,” Hassan said. “I gave them four or five options. My first choice was Mahmudullah Riyad, and then Mosaddek [Hossain], Mahedi [Hasan] and the fourth option was Soumya [Sarkar]. They [captain Haque and coach Russell Domingo] selected Soumya.

“I still went ahead and personally called Mahmudullah, who told me he had back pain. Mosaddek was in Abu Dhabi. We tried, but they [Haque and Domingo] had only one choice. They didn’t mention any other names.”

Haque said they needed an allrounder in place of Shakib. “Shakib bhai‘s absence threw off our combination. I needed a batsman who could bowl medium-pace.

“I went with Soumya because he is an experienced player, and has been playing ODIs recently too. These things come up when you lose a game, and it would have been a different story if we had won.”

Sarkar’s selection was just one of many topics that Hassan criticised the Bangladesh team for. He also took offence about Taijul Islam saying after the third day of the first Test that a lead of 250 was good enough on that pitch. Bangladesh, though, set West Indies a target of 395, which they chased down with three wickets in hand.

“We are not going to make abrupt changes but we can’t let this happen,” Hassan said. “Definitely it is time to look into these things. Look, we can lose a Test but we cannot just declare that a 250-lead is enough to beat a visiting side.

“We couldn’t defend 395, and a batsman went on to score a double-hundred on the fifth day. These are unacceptable. We bowled poorly, no doubt.”

Hassan sounded ticked off by the spin strategy as well, and said the team management should have picked a second seamer for the Dhaka Test.

“Since the Afghanistan Test [in 2019], all I have heard is spinning wicket. Recently our pacers did well in the domestic tournament. We have a number of pacers. But we didn’t play the pacers. We took five pacers, closed down any room for an allrounder but we played only one pacer. Why did we then take these pacers?”

Hassan said that there is a detachment between the Bangladesh team and him due to their bio-secure bubble. He took exception to the fact that Haque and Domingo, the captain and coach, had taken all the team decisions during this series. Pre Covid-19 and bio bubbles, Hassan and some of the board directors typically stayed with the team management during home and away series.

“After a game, I am usually entering their dressing room at this time, or sit in their team hotel. I haven’t been able to interact with them. We only had one Zoom meeting with the full team but that’s not enough to know what’s going on. I asked Akram what the plan is. He says he doesn’t know. The selectors don’t know. We are not inside the bubble. We have to know what happened before I can tell you anything.”

He called the lack of access he had “intolerable” and warned about a “message” being given to the team.

“I cannot give you any more details but I want to tell you that we tried. Now we have to know what’s happening, as it is becoming intolerable. There’s however very little time since we are heading to New Zealand, and then a week after New Zealand we are going to Sri Lanka. We cannot make a lot of tumult in this short time but the message will be given.”

Saini, Saurabh give India A opening-day honours
James Anderson feels the rare thrill of the unknown ahead of Pakistan Test bow
Both teams unchanged as Afghanistan opt to bat
Gaikwad smashes List A record with seven sixes in 43-run over
‘It is not true’ – Langer adamant no cricket rift exists