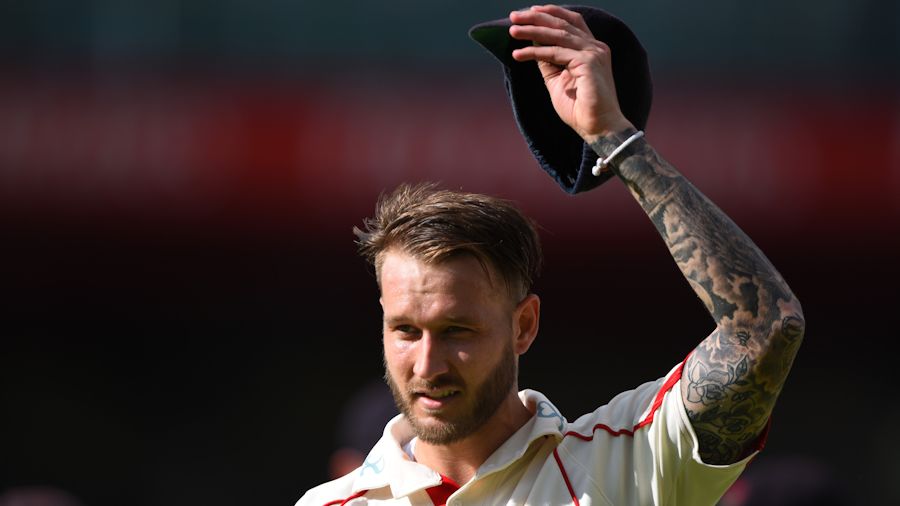 Zimbabwean quick Kyle Jarvis won’t be able to play cricket for up to six months as he recovers from a trio of infectious illnesses – Covid-19, malaria and tick bite fever – that struck him at the same time but considers himself one of the luckiest survivors around. Jarvis was diagnosed at the end of January and received top-quality medical care which he recognised is not accessible to everyone in his country, or on his continent and is willing to bide his time back to full fitness.

“At the Borrowdale Trauma Centre, there are only four private beds at the hospital and I had one of them. The other three were empty. I was very lucky that I have private medical care. If you are someone who is not as fortunate, it would have been a lot scarier,” Jarvis told ESPNcricinfo from his home in Harare.

Jarvis first felt symptoms of coronavirus on the morning of Tuesday, January 26. “I had just got back from a fitness session and I felt very hot. Then, I started to get fever, body aches, nausea and headaches and so I thought it was Covid-19 and isolated, but it got progressively worse,” he said.

Four days later, on Saturday, January 30, Jarvis felt his condition was “too bad for me to stay at home,” and decided to seek medical care. His wife, Kelsey, who had been taking care of him and home and displayed none of the same symptoms, took him to the Borrowdale Trauma Centre, an upmarket medical facility considered to be the best in the country. There, they told him his “heart rate was above 220 beats per minute which is close to cardiac arrest and that’s when the panic set in.”

Jarvis was taken for blood tests and put on an oxygen supply until doctors had determined the cause of his symptoms, which they found to be multi-fold. “At first, they didn’t tell me I had all three (conditions) maybe because they thought I would have panicked more. My wife only told me towards the end of the day,” he said. “I didn’t react too badly because I knew they could treat malaria and tick bite fever and I was actually relieved I was on the right track.”

Jarvis was sent home and required to return to the hospital every day for the next five days “They put me on more oxygen each time and gave me drips. I had to spend three to four hours there a day receiving treatment,” he said.

By the beginning of February he began to feel better. Although he says his “voice is not 100%,” Jarvis sounds unusually upbeat for someone who will have at least medium-term effects. “I had a CT scan which showed some damage to the lungs from Covid-19 so the doctors think it will be between three and six months before I make a full recovery and will be on blood thinners for the next few months,” he said. “It’s frustrating and upsetting but when you’re been through something like that, you’re just happy to be returning to health”.

On the Saturday morning I could no longer carry on at home and rushed to Borrowdale Trauma! On arrival I had a heart rate of 225 and wasn’t in good a good way . Further tests were done and came to find out that I had Covid , Malaria and Tick bite fever .

Today, he took a four kilometre walk around his neighbourhood. Next week, when Zimbabwe leave for a two-Test and three T20 series in the UAE against Afghanistan, Jarvis will be trying to walk a little further, or a little faster. And in two months’ time, when Pakistan visit, he may be starting to bowl again. But he has no timeline for when he thinks he will be ready for competitive cricket and no sense that the environment is too risky for professional sport to be played. “The world needs to try and carry on and sport brings people hope,” he said. “Even if there’s no crowd, it lets people feel that we may have some kind of normalcy.”

Jarvis also cautioned other sportsmen that just because they are elite athletes does not mean they are immune to unpredictability of Covid-19. “I took it for granted that I’m young and fit so I thought that even if I get it, I wouldn’t have much of an issue. But it can happen to anyone and there’s always that chance that you could get something else and that’s scary,” he said. “Everyone is at risk of getting it.”

Zimbabwe has fared better than its neighbouring country, South Africa, in coronavirus infection and death rate with under 35,000 cases and less than 1,500 deaths. However, it is severely under-resourced and continues to maintain strict restrictions to prevent overwhelming the country’s limited medical services. The country is currently at Level 4 of a five-stage lockdown in which only mining, manufacturing and agricultural services are allowed to operate as normal and a 6pm to 6am curfew is in force.

Professional sports training and matches are allowed to take place although Jarvis has not seen his team-mates since late last year, with the Zimbabwe men’s team only reporting for a camp this week, ahead of their tour to the UAE. And he understands it may be some months before he sees and trains with them again. “I’m not in a hurry. I am feeling okay now and I’ll do my best to be back to normal when I can,” he said.