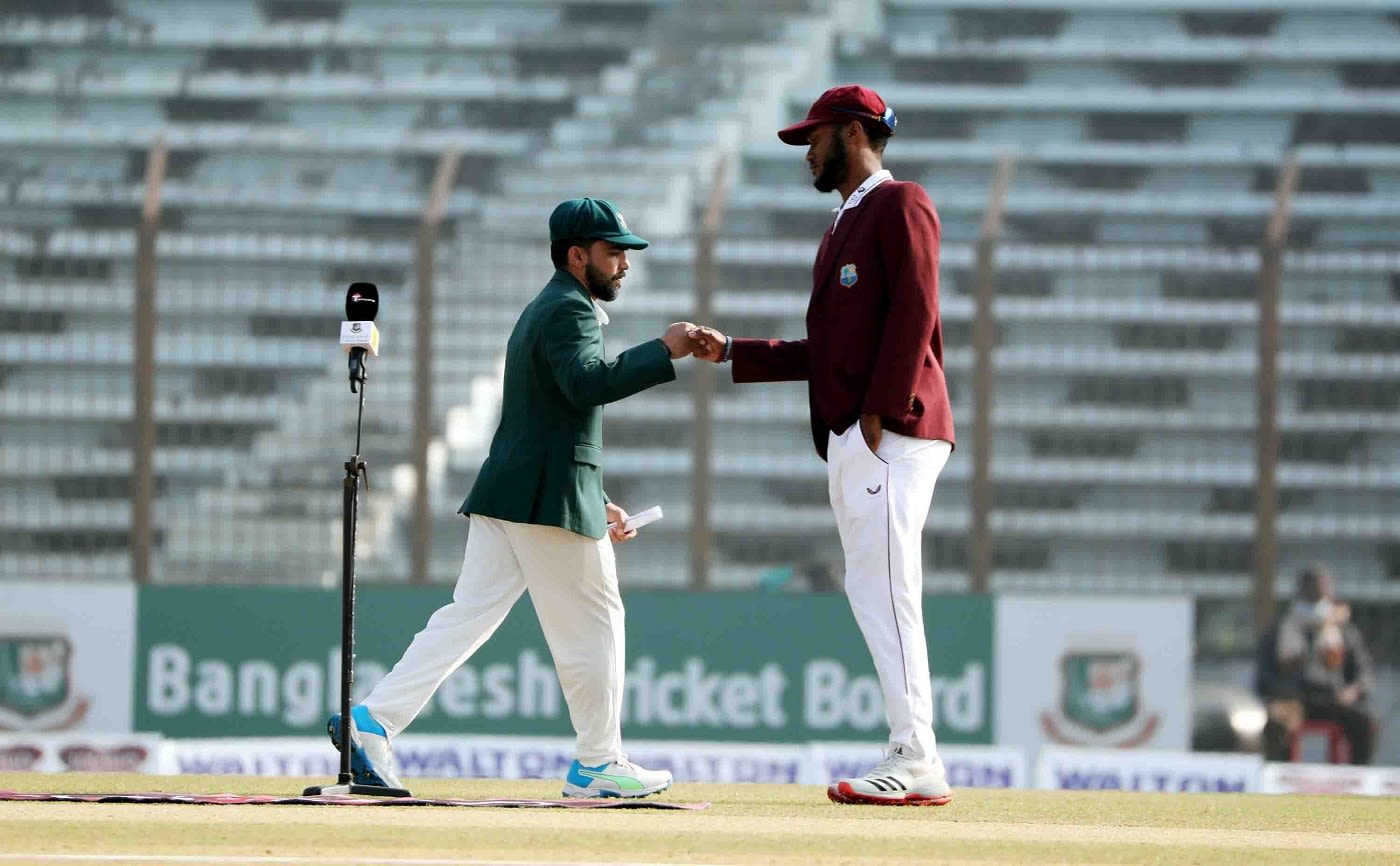 Bangladesh captain Mominul Haque, meanwhile, admits “we have never faced such a situation,” as they fight to level the series

The mood is quite different in both the Bangladesh as well as the West Indies camps ahead of the second Test in Dhaka, especially after the visitors hunted down 395 in Chattogram. But visiting captain Kraigg Brathwaite has warned his team against complacency, knowing fully well how the hosts can hit back on another slow and dry pitch.

Bangladesh have won four of the last five Tests at the Shere Bangla National Stadium, and Brathwaite believes West Indies will need to fight hard to get the job done in the next five days.

“The biggest thing is not to get carried away,” Brathwaite said. “We are happy with the win, but we know we start from zero. It is one of the things that the coach has stressed on in the practice sessions. Guys are working hard. For me, [the message] to them is to stay disciplined and stick to your plans both as a bowling and a batting unit.

“We as a team don’t want to get too far ahead. We have five days of Test cricket to play. We are very happy to have won the first Test. We want to buckle down. Victory has meant a lot for us. The guys are very proud of winning the first Test, but we look forward to the next five days.”

The story is slightly different, however, for Brathwaite’s counterpart Mominul Haque, who faces his first big challenge as Bangladesh’s Test captain. Not only does he have to win the match to level the series, but also has to do it without Shakib Al Hasan in his bowling attack; this, after having lost the first Test with the opposition needing 285 runs on a slow fifth-day pitch.

“We have never faced such a situation,” Haque said. “We have a lot to learn from this – especially how to face pressure situation, how to bowl and set a field in these situations. It will help us for the future.”

Brathwaite, meanwhile, is focussing on the areas where West Indies need improvement. “We can improve on our first innings score to help us set the game up better,” he said. “We did well in the second innings. We have to be a little sharper in the field in periods when there’s probably been a partnership. We can be a little tighter.”

Brathwaite expects the Shere Bangla National Stadium to produce a typical subcontinent surface. “The pitch is quite similar to the first Test in terms of dryness,” he said. “There are some cracks as well, so I think it will be quite similar. It will probably be slower even than the first Test.”

As much as the Test will hinge on how the spinners from either side do, West Indies’ fast bowlers might be called upon to use their extra pace even on a largely dead surface. Brathwaite thus said that Shannon Gabriel’s third-day burst of pace in Chattogram greatly inspired him, particularly as it came so deep in the Test match.

“That spell was very inspirational for me to even watch,” he said. “We fielded 150 overs in the first innings. Shannon was then asked to be slightly aggressive, give his 100% and even go for two extra overs. He led the way. It was a very bright spot in the game for me.

“Fast bowling in the sub-continent is never easy. Fast bowlers like Kemar Roach and even Kyle Mayers for a couple of overs, they gave it their all. Kudos to them. It is never easy. They have to try different things, sometimes cross-seam and slower balls.”