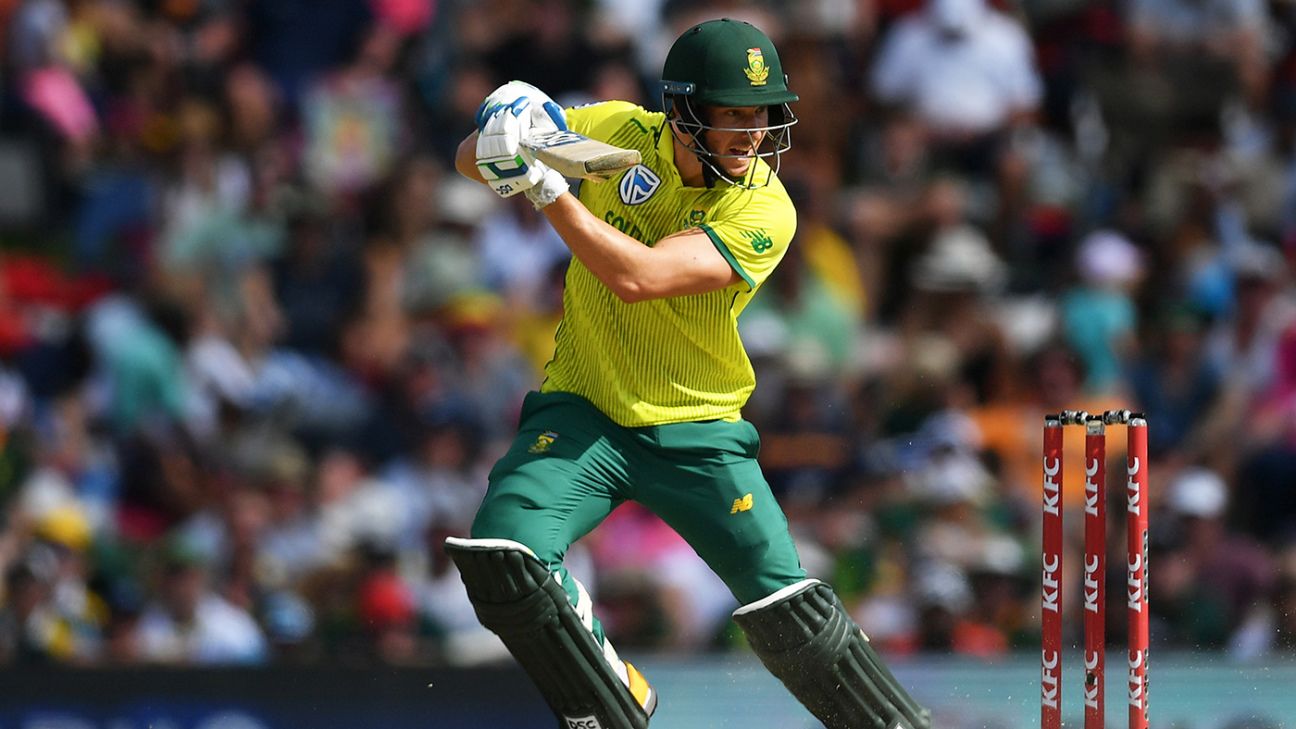 Miller has 78 T20I caps, a shave under three times as many as the next most experienced member of the squad picked to play Pakistan

David Miller aims to use his position as the senior-most member of South Africa’s T20I squad to have an influence on and off the field in their upcoming series against Pakistan.

Miller has 78 T20I caps, a shave under three times as many as the next most experienced member of the squad, Andile Phehlukwayo and is one of only four players (including Tabraiz Shamsi and Reeza Hendricks) to have played more than 20 internationals in this format. He is not the captain – that job has gone to Heinrich Klaasen – but Miller intends to play a big behind-the-scenes role.

“I’m secure in my role and in what I want to do which brings calmness and clarity to the squad and to players that haven’t been on the international circuit. It can give them reassurance in their role and am looking to help out with youngsters off the field,” Miller said. “And then on the field, cricket it’s about performance. You need to stick up your hand and perform when the team requires you to. We all need to perform as players but it helps when senior players perform.”

That much was evident by its absence in the recently completed Test series where Quinton de Kock contributed just 46 runs in four innings, Faf du Plessis scored 55 runs and Dean Elgar 119 runs, and South Africa suffered batting collapses in every innings. Head coach Mark Boucher was critical in his analysis when he said, “if you want to have a shot at winning an overseas series, you need your senior players to stand up and unfortunately, it didn’t happen.”

The T20 rubber holds less weight in the bigger scheme of things, especially since South Africa have been forced to field a new-look side because the bulk of their Test squad has returned home, originally to prepare for a series against Australia but that has been postponed and it was too late to change plans already in place. While Miller didn’t go to the extent Klaasen did when he rubbished their second-string status, he echoed Klaasen’s assertion that this is still an international-quality side on a mission to win. “We are representing our country and we are here to win,” he said. “It would be great to play guys that we are accustomed to but at the same time it gives us a great opportunity for guys that haven’t played to step up. As a senior player, I would like to step up in a lot of different areas on and off the field.”

Not only is Miller the most experienced but he is also the only one who has played in Pakistan. He featured in three matches for the World XI in 2017 and described the tour as “very brief,” and not necessarily a good eye-opener into conditions. Instead, the week the T20I squad have spent in Lahore has better equipped them for what to expect in the series. “We’ve quickly realised what the conditions will be. Generally, the bounce is a lot lower than back in South Africa,” Miller said.

The same was true for the Tests and those who were able to adapt to it, like Aiden Markram and Temba Bavuma, were fairly successful. South Africa won’t have either of them for this series and will instead look at the likes of Hendricks, Janneman Malan, Jacques Snyman, Jon-Jon Smuts and Pite van Biljon to navigate the different bounce. “They’ve played enough in South Africa where there might be particular venues that keep low,” Miller said.

Similarly, Glenton Stuurman and Lutho Sipamla, who have spent time bowling on tracks like Port Elizabeth’s St George’s Park, where it keeps low, also have domestic experience to call on. “Some of these guys have been around the block in domestic cricket for many years so they know their games,” Miller said. “Cricket is played the same way at all levels. The only difference is the intensity has risen.”

Exposing more players to international white-ball experience had been South Africa’s approach throughout last summer as they hoped to finalise a playing group for the T20 World Cup and begin looking ahead to the 2023 50-over World Cup. As a result, they handed out six new ODI caps and five new T20I caps in the last 18 months, and won one out of five series, a 3-0 ODI whitewash over Australia last March. Miller acknowledged that casting the net wide made it “difficult to try and build things as a team when the team has different players all the time,” but expects that from now until the T20 World Cup, the squad will become “a bit more consistent.”

That means time is running out for players in the fringes, like so many in this squad, to nail down a spot and for the experienced core to make sure they are in form ahead of October’s T20 World Cup. Miller said the younger guys “have to take their chances where they come,” and he hopes to find some rhythm after a long period on the sidelines.

Miller last played international cricket last March, played in only one IPL game and two domestic fifty-over matches and missed the T20Is against England for health reasons but has prepared well and believes he is ready to be challenged at the highest level again. “It has been a long time since I’ve played. I have to start again but I feel well-prepared and organised. I am mentally fresh and ready to go,” he said.

Miller will return home with the T20 squad next Monday to play in the domestic T20 competition and then will head back to Pakistan for the second half of the PSL.