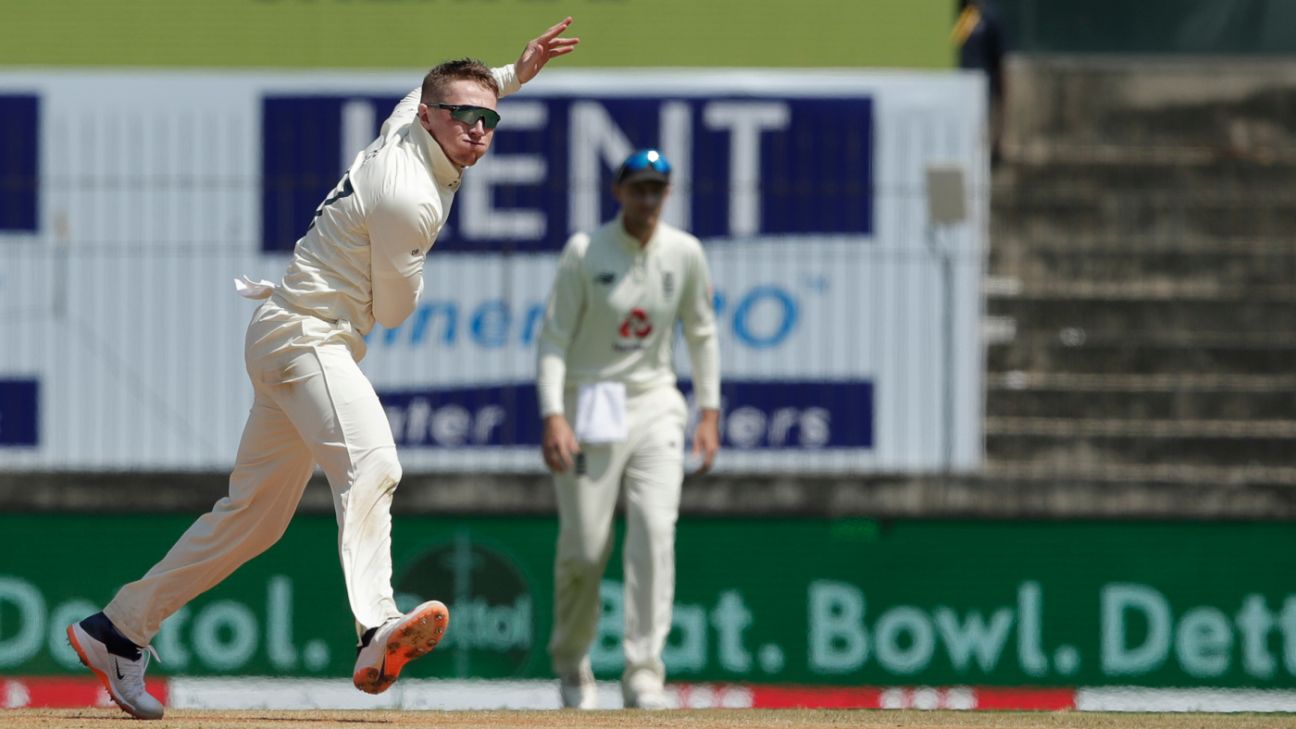 Off-spinner produced an up and down performance in first Test

Chris Silverwood insists he is “not worried” about Dom Bess, despite an up and down performance from the off-spinner in the first Test in Chennai.

Bess claimed five wickets in the match and contributed 59 with the bat across the two innings. But he also bowled 19 full tosses – 12 in the first innings and seven in the second – including a grim over which saw him bowl three in succession to Virat Kohli. Each of them was hit for four.

But while Silverwood, the England coach, conceded Bess had endured “a bad day”, he did not believe there was any more significant problem than that.

“I think he just had a bad day, which can happen to anybody,” Silverwood said. “The top and bottom of that one is that we’ll get in the nets on Thursday and we’ll get bowling again and I’m sure he’ll get straight back on the bike. I’m not concerned at this moment in time. Did he have an attack of the yips? No, absolutely not.

“I am not worried. I had a chat with him afterwards and he’s still in good spirits. Everybody has a bad day and I can accept that.

“It’s not through lack of effort. We get to the nets, work hard again and find him some rhythm: I am sure he will be fine.”

Bess’ record on the tour as a whole, which started with two Tests in Sri Lanka, is excellent. He has taken 17 wickets across the three Tests at an average of 22.41 as well as averaging 22.75 with the bat. While he would admit there has been an element of fortune about some of those wickets – he had Cheteshwar Pujara caught at mid-wicket in Chennai after his pull shot bounced off the back of the short-leg fielder – he has also produced some fine deliveries. Even on the final day in Chennai, he had Washington Sundar caught behind off a fast, sharply turning off-break.

But those full tosses are a worry and suggest problems in either temperament, technique or perhaps both. That leaves England having to decide whether it is better for Bess’ long-term future to stick with him for another game and risk the possibility of exposing him to further difficulties, or leaving him out and denting his confidence.

One option would be for them to recall Moeen Ali for the second Test. But Moeen hasn’t played a first-class game since September (and a Test since August 2019) and may also be short of bowling having recently had to spend two weeks in isolation after being diagnosed with Covid-19 when England arrived in Sri Lanka.

Silverwood, though, is adamant that he is a “viable option” for the second Test and will know he scored two centuries on England’s most recent Test tour of India.

“Moeen has worked as hard as he can with the facilities we have,” Silverwood said. “Obviously he has not played in a game and we know that. We accept that those are the times we are in, but should he play, I would have every confidence in him.”

The underlying issue with Bess is that he is having to learn his trade at the highest level. With County Championship cricket providing few opportunities for spin bowlers to play, let alone bowl the volume of overs they require, he is effectively gaining the experience he needs against the toughest opposition and under the glare of the brightest spotlight. With that in mind, the England management may decide the only way he will gain more experience is by bearing with him through the inevitable bumps in the road that will occur as he develops.

If Silverwood had come to a conclusion on the issue, he was not sharing it on Wednesday. Instead, England will return to the nets on Thursday – the entire squad had a rest day following the Test – and perhaps make a decision after that training session.