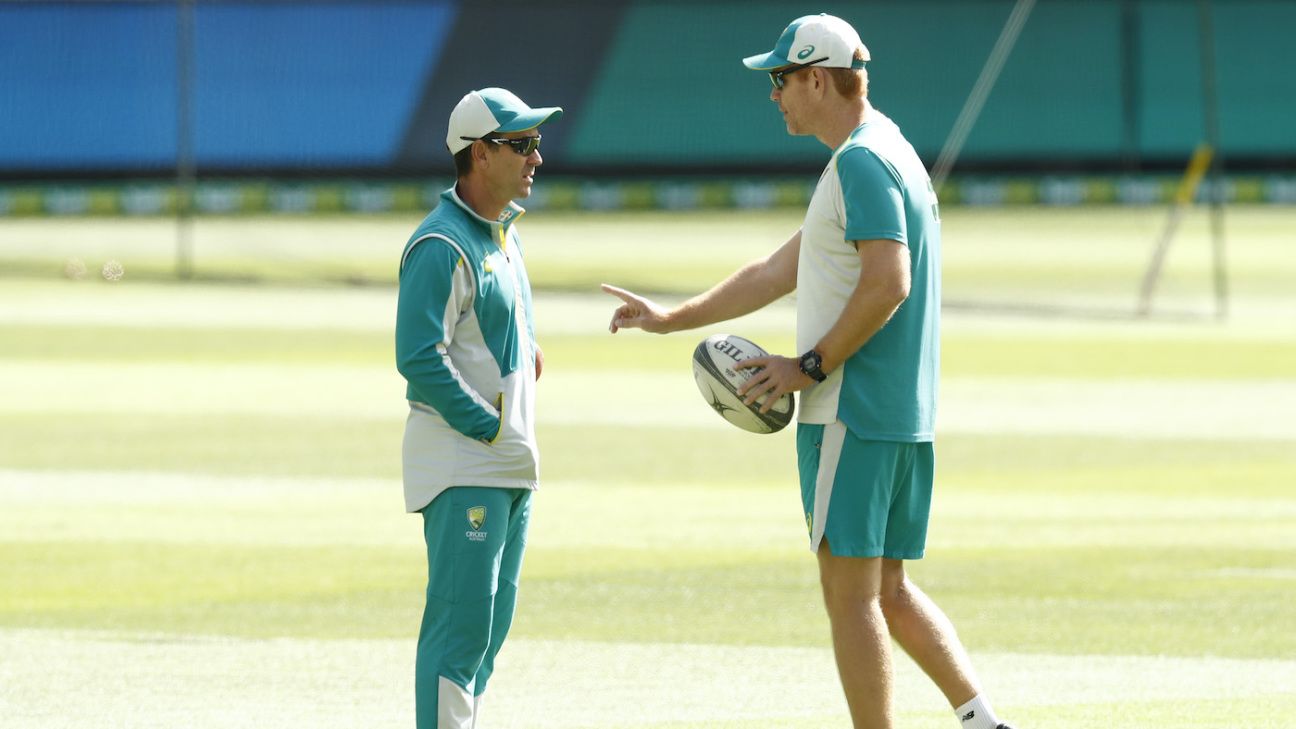 Finding some permanent answers to Australia’s long-standing middle-order issues in T20 international cricket is top of the agenda for stand-in coach Andrew McDonald in the upcoming five-match series against New Zealand.

Australia’s T20I side was extremely settled and well-oiled in the lead-up to the cancelled home T20 World Cup in Australia last year.

McDonald had joined Justin Langer’s coaching group in November of 2019 and with four BBL titles between the pair, they helped mould a team that won nine of 10 games over a 12-month period on the back of settled top-four and a five-man bowling attack that featured spin twins Ashton Agar and Adam Zampa alongside three fast bowlers. But even at their best, there were still question marks over the best options in the difficult middle-order batting roles.

Those questions have grown louder in the lead up to the 2021 World Cup in India. Australia have lost four of their last six T20Is against England and India and have tinkered with that settled line-up through a combination of form, injury, and the need to rest three-format players.

New Zealand presents an opportunity for one or two players to stake their claims for a permanent place in Australia’s middle order with McDonald keen to see how the likes of Marcus Stoinis, Mitchell Marsh, Ashton Turner and Ben McDermott might go in those rules.

“There’s no doubt that the players that played in those positions at times haven’t performed the way that they’ve liked to perform,” McDonald said. “But you’ve mentioned a couple of guys there that have got some experience within the Australian team of recent times in Marsh and Stoinis and those two present great middle options for us.

“We’ve seen Stoinis’ growth and improvement through the IPL, in particular, starting against spin, and the intent starting against spin as well. So he’s grown. Mitch Marsh, I thought had an outstanding BBL, albeit had a small setback with injury but his power-hitting, in particular, his power-hitting with wider deliveries is something that he’s improved. So that makes him a bit of a handful. Ashton Turner is no doubt someone who has been earmarked for awhile as a very composed, smart finisher and we saw that play out in Mohali a few years ago and he’s starting to return to that similar form.”

One of the issues for the middle order is the lack of opportunity given the dominance of Australia’s top four. In the 15 T20Is Australia has played since October 2019, no player has had more than 3 innings batting in the No. 5-6 slots. Turner and McDermott both filled the roles in the year prior but lost their places in the side. McDermott has returned to the top of the order for the Hobart Hurricanes in the BBL with great success while Turner is the only true middle-order specialist in the squad.

Australia has had a history of trying to shoehorn top-order players into the specialised role. They do have another BBL opener in Josh Philippe who has experience at No.6 in T20 cricket. Aaron Finch has already stated Philippe would bat in the top three on this tour but he played his first nine T20s for the Sydney Sixers in 2018-19 batting at No.6 with an impressive average (27.40) and strike-rate (152.55). McDonald didn’t rule out experimenting with him down at the order at some stage in the series.

“Philippe started his career at six for the Sixers, so he’s had exposure in those roles,” McDonald said.

“We’ve got enough guys there that have had exposure. It’s really whoever gets that opportunity takes it, and there’s no doubt that they can lock away that spot moving forward.”

McDonald has a difficult assignment in New Zealand. Head coach Justin Langer was scheduled to head to South Africa with the Test team but after the Test tour was cancelled, he was not re-assigned to New Zealand and is instead resting at home in Perth. Australia’s all-format regulars like Steven Smith, David Warner, Pat Cummins, Mitchell Starc, and Josh Hazlewood are also at home, as are Moises Henriques, Sean Abbott and Mitch Swepson who featured in Australia’s most recent T20I XI. All were headed to South Africa and none were added to the New Zealand squad.

McDonald’s task is to try and balance the long-term view of filling the missing pieces into Australia’s first-choice T20 side for the World Cup, whilst picking the best team to win the series at hand.

“It’s a good question and there’s no doubt we will be working back off the World Cup plans,” McDonald said. “I think it’s really as simple as working out who the locks are for the World Cup and then fitting the other players potentially in and around that. But also exposing them to positions that they may not have been exposed to before in a sense that, for example, Josh Philippe, if Warner and Finch are opening in the World Cup then does that look like him batting somewhere else in the order. We’ll need to find that out, there’s no doubt about that.”

The series may also provide an opportunity to find out if the tried and trusted formula picking five specialist bowlers is the best way to go for the World Cup in India, or whether Australia could potentially be successful with a different structure with more allrounders to deepen the batting.

“We’ve played two spinners and three quicks across the journey,” McDonald said. “Is that the formation to win a World Cup? Well, you’d say that’s probably our best formation but do we need to learn to play another way as well at times. And does that potentially look like more an allrounders team? A bit like the 50-over team. We’ve got a few things that are on the table and we’re discussing.”

Marsh is expected to bowl during the series after suffering a side strain during the BBL but the Australian camp won’t rush his return given they have will have limited training time during their 14-day quarantine.

Whilst Australia are focussed on solving some long-term issues with their side ahead of the World Cup, they are wary of the New Zealand outfit they are about to face which features some experienced names and some fresh faces.

“They’ve unearthed some new talent in Phillips, Seifert and Devon Conway,” McDonald said. “They’ve added probably to the depth. But I always think with New Zealand, one of their strengths is their ability to work through with the ball. I think they’ve got some quality bowlers that execute under pressure. They’re a calm team as well. Well led by Kane. It’s almost like they’ve got a predictable element to them in terms of their performance. We’re going to have our work cut out. Quality players across the board. I think that it’s probably hands down the best period of players in New Zealand’s history and some of these players that we’re currently seeing are going to go down as greats and that’s what makes them difficult to play against.”