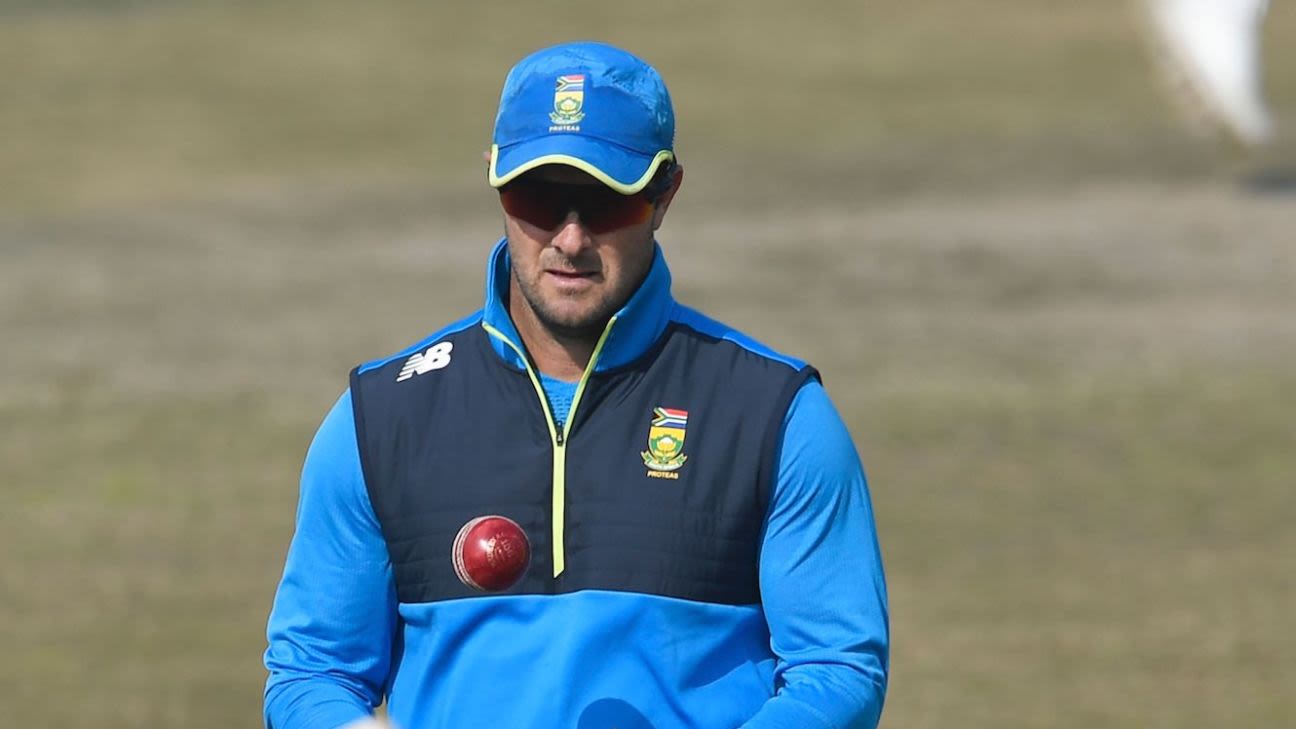 South Africa head coach Mark Boucher has identified lack of mental application and diminished match awareness as the two main reasons for the poor batting and fielding that led to the Test team’s 2-0 defeat in Pakistan.

South Africa lost both matches in the series, suffered batting collapses in each of their innings, and four of their 40 dismissals were caused by run-outs. They also dropped at least seven clear catches across the two Tests, including the costly one of Mohammad Rizwan in Rawalpindi, who was put down on four and went to score a match-winning 115*.

“The way we played in big moments really cost us,” Boucher said. “Our match awareness of when to tighten the screws was lacking. That is the reason why we lost the game. We didn’t bat well, didn’t field well but our bowling stood out. We created opportunities, we just didn’t take them. That cost us, in this game alone, about 150 runs.”

In the space of two balls in Pakistan’s second innings, South Africa put down Rizwan and Faheem Ashraf, who had yet to score a run. Pakistan were 76 for 5 at the time, 147 runs ahead on a pitch that was becoming easier for batting. “If we had taken those catches, we would have them 76 for 7, [and] maybe bowled them out for 120, chased 220 and won the game,” Boucher said.

For that to have happened, South Africa would have also needed to chase well, something they did in patches in the second Test, but which they have not done successfully consistently for several years. The last time South Africa won a match chasing a total over 200 was almost a decade ago, in 2011 against Australia. They have had 21 opportunities to repeat that feat since but have lost 18 of those matches and drawn three.

Given their reputation for stumbling before the finish line in major limited-overs matches and their string of nine losses on the road in Asia, Boucher believes the batting problems run deeper than difficulties in technique. “It’s more mental,” he said. “”Maybe there are some technical issues in guys are getting out in the same sorts of ways every time but we are continuously looking at little technical things that we can improve on. I think it’s more mental. There’s lots of scars from past tours to the subcontinent. Some guys who have had technical issues in the past, like Aiden Markram spent time at the crease and was able to fight his way through it. It’s more mental than anything else.”

South Africa lost series in Sri Lanka and India in the last three years with many of the same members of the line-ups that were defeated in Pakistan. While learning to play on turning tracks and adjusting to low bounce are some of the things that South African batsmen have done, they are not able to apply those principles for long enough periods of time or show the patience required to build an innings on slow pitches. “We just seem to, in big moments, when we really need to drive home an advantage, find ways to get out. In the first innings with Temba and Wiaan, it really looked like the game was getting easier and we were building a partnership and then we had a run out,” Boucher said, referring to Mulder taking on Shaheen Shah Afridi’s arm and losing while pushing for a second run. “It’s stupid ways; ways to get out in really important moments of the game. It really cost us.”

The absence of a specialist batting coach will also come under scrutiny with South Africa looking to re-engage Jacques Kallis in a consultant role as soon as possible, but the allround failure to explain the constant collapses remains. Much like Quinton de Kock and Markram, Boucher was unable to isolate a reason for South Africa losing wickets in clumps.

“We added an extra allrounder to the equation this game and it didn’t seem to work. The second new ball played a massive role in the collapse, which can happen, but not to the extent of losing seven wickets for 33 runs. That’s a major batting collapse, especially when you are looking to chase down a total,” he said. “Our match awareness against the new ball wasn’t quite where it should be. We needed to understand it was going to be vitally important to get through. The history of the game is that when the ball is 15-20 overs old it’s a lot easier to bat. We need to look after those 15-20 overs and we didn’t do that.”

Among the batsmen who were dismissed with the second new ball was temporary Test captain de Kock, who had a disappointing series with a top-score of 29. de Kock has scored just 74 runs in four Tests since being given the leadership but Boucher cautioned against using the extra responsibility as the sole cause of de Kock’s lean patch. “Batters go through periods where they score and periods where they don’t score. Quinny, unfortunately, it’s been when he had the captaincy as well. It’s difficult to answer yes or no because batters go through lack of form at certain times. The big thing is that when you are a captain everything is highlighted, so his lack of form has been highlighted,” Boucher said.

After earlier suggesting de Kock would be relieved of the Test captaincy at the end of this series, Boucher also said he thought the time was right for South Africa to appoint someone who they believe will be in the job for the long-term. “We’ve got a bit of time now. We’ve got time to make a non-emotional, smart decision on the way forward. If it’s looking at someone else to do that job, the time is probably now. We have got a bit of time and we can give that guy a few months to get his way in and listen to what thoughts he’s got.”

South Africa do not have any confirmed Test fixtures for the rest of 2021, with the FTP still to be decided. After the last-minute postponement of Australia’s three-Test series, they have been unable to find opposition for the March window and will instead look at the internationals playing domestic first-class cricket in a bid to find form. “It will be good to get some four-day games in the domestic competition and get everyone playing. That’s where the guys get some good confidence and match awareness gets highlighted,” Boucher said.