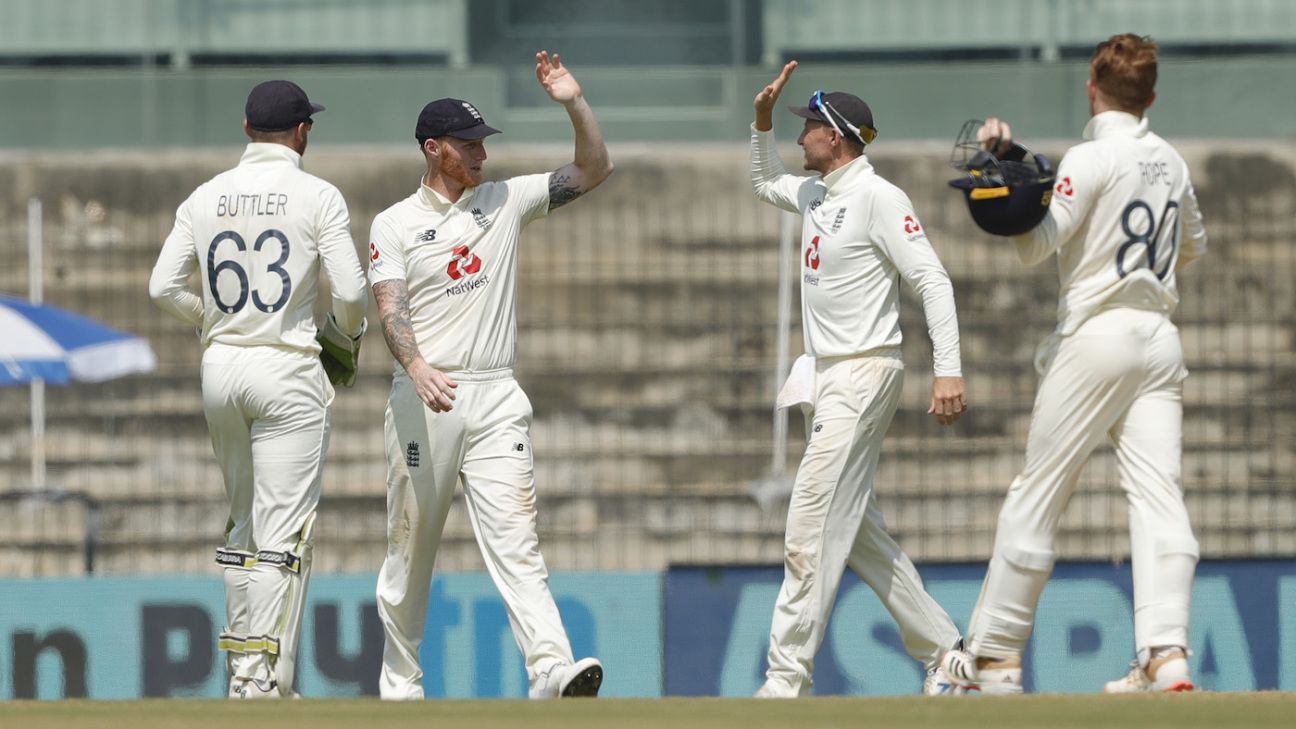 Joe Root has hailed the work ethic of his England side while warning that they must continue to improve after taking a 1-0 lead in the four-Test series in Chennai. England enjoyed a “fantastic five days” to inflict India’s first defeat at home since 2017, with Root leading from the front in his 100th Test, but he was keen to focus on maintaining the high standards after wrapping up victory with time to spare on the final afternoon.

Root’s first-innings double-hundred set the tone, and there were contributions from Dom Sibley and Ben Stokes with the bat, and the bowlers then shared the wickets around in both innings to complete one of England’s most memorable overseas victories. Criticism of England’s indecisive approach with the bat after tea on day four melted away as they claimed five wickets in the morning session – led by an expert spell of reverse swing from James Anderson – on the way to their first win in India since 2012.

“Fantastic five days, the way we’ve got about things, we’ve executed the gameplan brilliantly, and to finish in the manner we have done today is really pleasing. But we know there’s a huge amount of hard work ahead of us for the rest of the series,” Root said. “[There’s been] a lot of hard work from the guys, a willingness to learn and develop their games. We’ve said how we wanted to play our cricket, and we’ve managed to do consistently now. Can we turn up next week and do it again? Can we keep finding ways of getting better on surfaces and conditions we’re not used to? We’ve got some very adaptable young players that have come in and very quickly had to learn on the job, in the hardest environments.

“Look at Dom Sibley, the last two games he’s played fantastically well off the back of a couple low scores. He’s figured out a way of playing in these conditions and that’s the attitude and mindset of the whole dressing room. Really important we don’t just stand still now, and be happy with what we’ve achieved, we try and go one more and find ways of being better in these conditions.”

“To come here at the start of a very big series, and score big runs, more than anything setting the example for the rest of guys. It sets things up nicely for the rest of the tour, hopefully guys have seen that and it gives them confidence to go about how they’re going to make big contributions”

Joe Root on the double-century in his 100th Test

Root shrugged off questions about England’s approach in the second innings. Having taken a 241-run lead, they attempted to push for quick runs – Root himself scored 40 off 32 – before seeming to get stuck between mindsets after tea. Talk of a declaration was moot as they were eventually bowled out, leaving India a theoretical 107 overs in which to score 420.

“More than anything, it was to try to make sure there were only two outcomes possible in the game,” Root said. “The idea was to get to 400 and try to speed things up a bit. It didn’t quite materialise like that. We also wanted to make sure that the ball was nice and firm when we turned up this morning, so we could exploit those lengths. Having spent more time that anyone else on that wicket, batted on it at different points, I thought the progression of how it deteriorated was significant and there would be plenty happening for us.

“If there was only the two opportunities for a result in the game then that would play into our hands. I thought our bowlers delivered brilliantly today and we ended up with so much time in the game that it worked out perfectly.”

He also had praise for his spinners, Dom Bess and Jack Leach, who claimed 11 wickets between in the match them despite each experiencing tough spells when India’s batsmen looked to get on top of them.

“I think they’ve done a really good job for us, between them over the course of the two innings in putting some valuable contributions, four wickets apiece in either innings,” Root said. “A brilliant performance from the whole bowling group, that is going to be our key over here, not putting pressure on individuals to go and perform and deliver, or the spinners or the seamers, it’s collectively how are we going to take 20 wickets. I think we did that really well this game, and that’s going to be the challenge for the guys who get the responsibility in the next game as well.”

England have talked up the possibility of rotating their bowlers in the subcontinent, and Root said that they would “take stock and see how everyone is” before considering the make-up of the XI for the second Chennai Test, starting on Saturday.

The victory was Root’s 26th as Test captain, drawing him level with Michael Vaughan’s record for England. Of the achievement of scoring a double-hundred in his 100th Test, Root said he hoped that it would help set the tone for the rest of the series.

“Certainly feels good, really special week for a number of different reasons,” he said. “To come here at the start of a very big series, and score big runs, more than anything setting the example for the rest of guys. It sets things up nicely for the rest of the tour, hopefully guys have seen that and it gives them confidence to go about how they’re going to make big contributions. We’re going to have to score big runs if we’re going to win again out here.

“We’ve still got room for improvement, which is really exciting but we know India are a really good side, they’ve got a fantastic record and are a very proud team off the back of a famous win in Australia, so we expect them to come back at us and we’ll have to be at our best again. But what a position to be in already.”