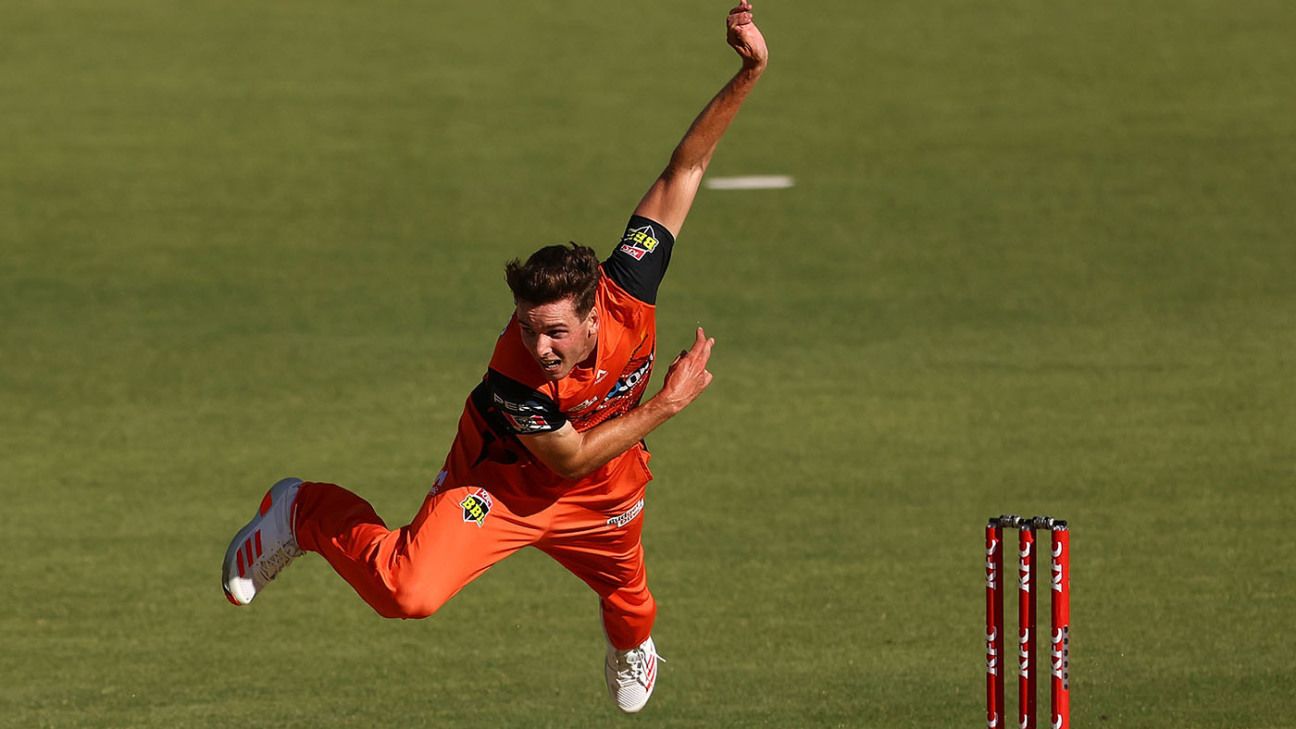 Jhye Richardson‘s friends noticed there was something not quite right about him during the latter phases of the same Big Bash League in which he was feted as its leading wicket-taker.

Though an overall return of 29 wickets at 16.31 made Richardson, 24, the BBL’s standout pace bowler, his figures at the pointy end were less flattering. Five wickets at 48.75 while conceding 10.26 per over across his final five games of the BBL for the Perth Scorchers meant that Richardson found himself getting visibly frustrated that the fruitful earlier days of the competition did not stretch into the finals, where he rounded things off by conceding 45 runs at the SCG as James Vince, Jordan Silk and Carlos Brathwaite all found their range.

The raw figures were not themselves unexpected in a format as fickle as T20, but Richardson’s harried reactions to them were. Speaking from New Zealand, Richardson said that those close to him had pointed out how emotional he was getting, and he has resolved to be kinder to himself during his next assignment. This lesson will be one that Richardson doubtless returns to in coming years, as he looms among the most likely candidates to bring younger legs and a challenging, skiddy trajectory to the Test team.

“I definitely did – I think one of the main ones being that T20 is such a fickle game that you can’t be so hard on yourself,” Richardson said when asked whether he took anything from those final five games. “I probably felt a little bit of pressure having such a good tournament to then not performing so well, I felt like I was letting the team down a little bit and put myself under pressure to perform. I wouldn’t say I was trying too hard, I was still trying to go about it the same way I normally would. I probably just got a little bit more emotional.

“That was visible as well from people watching, I certainly got a few messages after games saying ‘haven’t really seen you that emotional in a while’, and that’s a really good thing to get pulled up on as well, something I worked really hard on earlier in my career, just to stay a little bit more level-headed and I think I felt that personal pressure a little bit. But learning from that and having a few conversations especially with our bowling coach Matt Mason, he just said ‘mate you need to go about it the way you normally do, you need to enjoy your cricket, because when you’re enjoying it you play really well’.

“That’s one thing I need to take into this tour, just to enjoy playing cricket and not be too hard on myself, because T20 is such a hard game. It’s more of an internal emotion, just getting frustrated with myself, getting annoyed with myself about things not going the way I’ve planned before the game. It’s getting annoyed at execution, it’s getting frustrated at the way the ball’s coming out. If I concentrate on having fun, then all that washes away because I’m enjoying myself regardless of the result and things become a bit easier.”

While Richardson’s reconstructed shoulder is still a source of wariness, as he is yet to be able to throw from the outfield and must “check himself” in terms of diving around in the field, the shoulder is more than up to the rigours of bowling. How much Richardson will bowl in long-form cricket is open to question, given that after this tour he has made himself available for the IPL, which will now clash with parts of the conclusion of the Australian domestic season.

“Bowling is pretty good, earlier in the tournament when we were down in Hobart and a few of the earlier games I was pulling up quite sore, but I think a lot of that had to do with external conditions,” he said. “The weather being so cold and one game was the Melbourne Stars game that got rained off, incredibly cold and having to warmup and cool down and warmup and cool down again was a little bit taxing on my shoulder from a pain perspective.

“But as the tournament went on that improved significantly, being able to go back-to-back became easier, and now at the latter end of the tournament was completely fine. The only ball I’ve really lost is the back of the hand slower ball, which I haven’t actually felt like I’ve needed as much as I would in the past.

“I have put my hand up for the IPL, but I have confidence in myself to be able to play red-ball cricket. I think a really good test of that was our back-to-back games, albeit only four overs a game, but I think from a back-to-back perspective trying to get up and go again and test how my shoulder was, it was completely fine. Test cricket is always the dream, that would always be the ideal, and I’d love to get back and play Shield cricket for WA as well, that would be really exciting.”

As for the difficult journey of the past two years, where Richardson recovered from a serious shoulder dislocation that cost him the chance to take part in the 2019 World Cup and Ashes double only to require major surgery and a second period of rehab in 2020, he said the reward of an international tour to New Zealand made the rougher days worthwhile.

“For me it comes back to enjoying playing cricket, because if I’m not enjoying it then I’m obviously doing something wrong”

“It’s been a little bit tough, but the reassurance there is that I’ve been there once, there’s no reason for me to no try and get back there again,” Richardson said. “That’s the way I think about it anyway, the opportunity is still going to be there, I’m still only 24 years old so there’s plenty of time, it’s just about concentrating on what’s happening at that particular moment, whether I’m playing for WA or the Scorchers and then whatever happens after that, if I get picked for Australia that’s a bonus.

“For me it comes back to enjoying playing cricket, because if I’m not enjoying it then I’m obviously doing something wrong. It’s been difficult dealing with such a big injury as well, but the positive now is I’m back on an Australian tour, which I’m really excited for and that positive out of all of it makes the whole road to recovery worth it. All of it’s been difficult. The initial injury that happened in the UAE probably didn’t hit me as soon as I thought it would.

“I was optimistic with the World Cup not too long after that and the discussion being trying to get up for that, things stayed relatively positive. Something that’s helped is there was always something around the corner to aim for, and then every time you get shut down from that or not make that [goal], it sort of chips away at you that little bit more. It’s been tough at times, but to be able to come back and play this BBL and have such a good tournament, to then get picked in the Australian team, it makes everything worth it. So super happy to be back.”