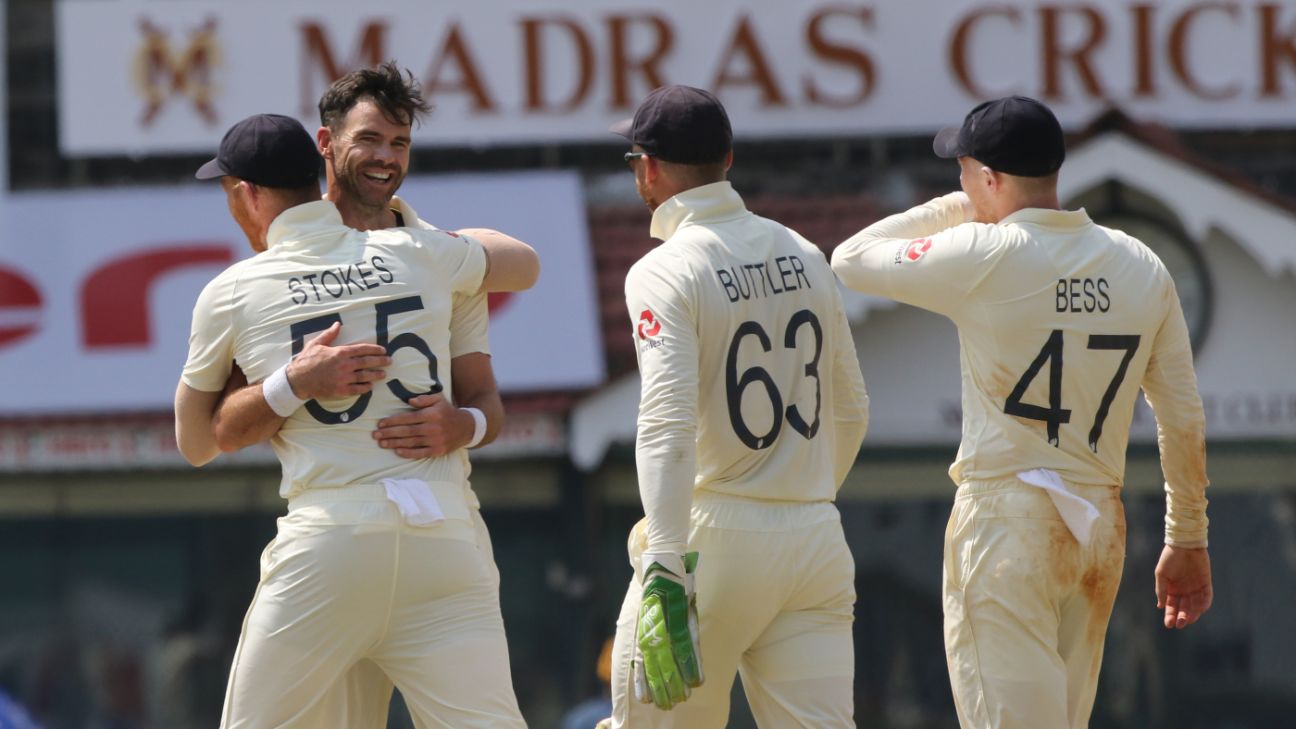 After lighting up the final day of the Chennai Test with another ageless display of reverse-swing bowling, James Anderson insists he will be ready to put his “name in the hat” for selection in Saturday’s second Test, even though the team management may feel obliged to rest him given the intensity of their four-match series in India.

Anderson returned figures of 3 for 17 in 11 overs in India’s second innings, including two in his first over of the final day, as he extracted prodigious late movement with a 26-over-old ball, to set England on their way to a comprehensive 227-run victory.

However, with the second Test set to begin at the same venue on Saturday, and with Stuart Broad waiting impatiently in the wings after being rotated out of the side after his own starring role in England’s first Test of the winter against Sri Lanka, Anderson recognises the likelihood that he will need to be benched, even though he’s desperate, at the age of 38, to play as frequently as he possibly can.

“Yes, of course [I want to play],” Anderson said at the end of the match. “When a batsman gets in rhythm and form they just want to keep batting and it’s the same for a bowler – you want to keep that going as much as possible.

“But I’m very aware we’ve got four Test matches in quick succession here and there will be a need to rest and rotate. I’m not presuming anything. I’ll try and rest and recover from this game as best I can in the next day or two and get back in the nets and try and put my name in the hat for Saturday.”

Following on from his starring role in the first innings in Galle, where he wrecked Sri Lanka’s match prospects with his best overseas figures of 6 for 40 in 29 overs, Anderson has now claimed 11 wickets at 9.90 in his back-to-back appearances, and after the match he was hailed by his captain, Joe Root, as “England’s GOAT”.

However, Broad will be hankering for another opportunity after a string of recent performances every bit as impressive as his team-mate’s. He was England’s outstanding bowler in the course of 2020, claiming 38 wickets at 14.76 all told, even after being rested in favour of Anderson for the opening Test of the summer – a decision that sparked an angry response during a Sky Sports interview. And after setting up England’s first victory in Sri Lanka with match figures of 3 for 34 in 26 overs, his presence will add another wise head to England’s attack.

“We have options, that’s the beauty of how we have gone about things this winter,” Joe Root, England’s captain, said. “It is really important that we look after our players and everyone comes into the games fit and fresh and able to deliver their skills at 100 percent. We can look at selection when we know what the wicket looks like and how we think it will behave.”

However, an added factor in England’s plans may come when the series shifts to Ahmedabad at the end of the month, for a day-night Test match, played with a pink ball. England have had three previous such Tests, and with 14 wickets at 17.85 – including a five-wicket haul at Adelaide in the 2017-18 Ashes – Anderson’s prowess under lights may well be a crucial factor.

Certainly, the balance and deployment of England’s attack at Chepauk proved to be spot-on, in the first innings as well as the second, with Anderson’s versatility as a defensive and attacking option showcased with his different impact in each.

“We assessed conditions really well, set the right fields, we tried to keep the run-rate down to a reasonable level and I thought everyone stuck to their gameplan,” Anderson said, after claiming two first-innings wickets at an economy of 2.73, the best of England’s frontline options.

“For me in that first innings, I felt I was the bowler to keep the run-rate down, try and dry things up, and let the spinners and Jofra [Archer] attack a little bit more.

“In England it might be the other way around, the spinners have to do the drying-up job. I’m very aware that could be my job out here, and then you can attack more in the second innings if you do get reverse swing. It’s just trying to manage that throughout the game and pick the right moment to attack and you know when to sit back and defend a little bit.”

And when the time did come to attack, Anderson’s introduction proved devastating with two wickets in his first over. However, he insisted, it hadn’t simply been blind luck that he was thrown the ball at that moment of India’s innings.

“We were assessing the ball all the time,” he said. “Jofra started the day and he felt like it was reversing a little bit, but then we gave it a few more overs with the spinners to try and get a bit more wear into the ball to rough it up a little bit more.

“We knew it would reverse when I came on to bowl and it’s just a case of trying to get into the right areas as much as possible. The pitch had deteriorated and there were little divots and chunks to aim at, but getting that extra bit of movement through the air makes it that little bit harder for the batsman, and it’s very enjoyable when it happens as well.”

Enjoyment, in fact, has been a key factor of England’s recent resurgence as a Test team, which began with a fightback in South Africa last year – sparked by Anderson’s first-innings five-for at Cape Town, even though he missed the rest of the match with injury – and carrying on through to four series wins in a row, prior to this contest.

“It really is [enjoyable],” Anderson said. “With the guys that we have got, we are creating something really special. We’re led amazingly well by Joe Root both on and off the field. The way he has batted the last three games has been incredible to watch.

“We feel like we are building something, whether it is the fitness side of things, we are trying to push each other. For me, as I get older, I feel like I need to work harder at that and I am trying to keep up with the younger guys which helps me.

“We are trying to develop skills to win anywhere in the world which you need to do if you want to get to No.1, which is what our eventual goal is. It is a really fun time to be around this group and we are just trying to keep challenging each other and trying to keep performing on the field as well.”