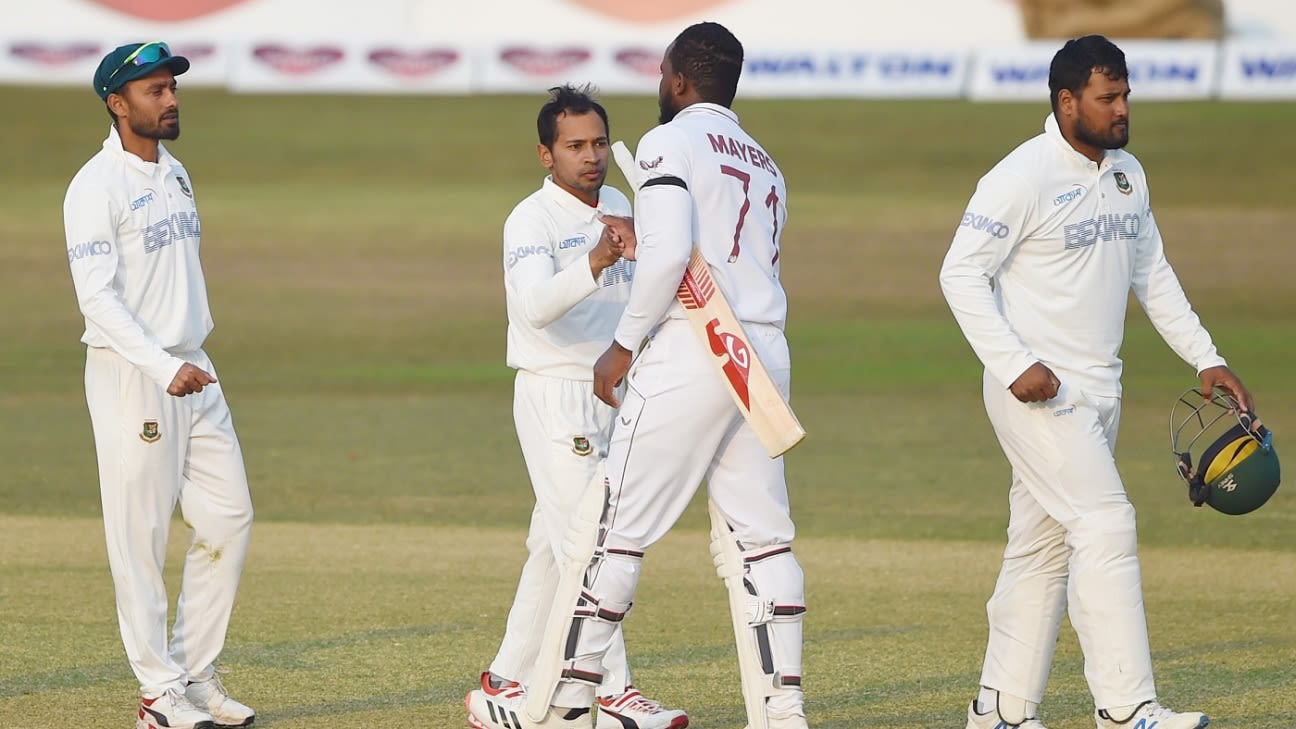 “It was full of confidence for the guys who were coming on tour,” says captain Kraigg Brathwaite

You wouldn’t normally need to motivate an international cricket team before a regular bilateral tour, but the West Indies’ trip to Bangladesh has been anything but normal. Their board’s commitment to keeping the FTP schedule intact has meant that West Indies have travelled the most of all teams since the pandemic began.

As much as they have provided entertainment during a tough period, it has also taken a toll on their players. Two weeks after the tour was confirmed, the West Indies selectors announced their Test and ODI squads bereft of their top names.

West Indies had nine uncapped players in the ODI side which was considerably less experienced than Bangladesh’s squad. The difference was similar between the Test sides too. West Indies only had their first-choice bowlers and couple of their main batsmen retained in the squad.

In addition to their lack of experience of playing in Bangladesh and maintaining strict health protocols in the team hotel, the Kraigg Brathwaite-led side could only do net sessions for two weeks – they had travelled to Bangladesh with the ODI team on the same day – before their first practice game in Chattogram.

Seeing that there was very little in their favour, Clive Lloyd, West Indies’ greatest cricket captain, wrote an open letter to the team.

He recognised the feeling within the team of being thrown into the deep end, but reminded them that this was their chance to cement a permanent place in the side. He touched upon his own Test debut experience in 1966 when he was given only a 45-minutes heads-up. He highlighted what a great Test team they used to be, but one that began with untried players under Lloyd’s leadership.

Above all, he inspired them to prove to the world that they were not “second-class cricketers” and that self belief is the first step to success.
After their three-wicket win in the Chattogram Test that astonished the cricket world, West Indies’ hero Kyle Mayers said that they were inspired by Lloyd’s letter.

“It was very inspirational,” Mayers said. “He just let us know that representing West Indies is a lot, and he said don’t go to Bangladesh thinking you are a second-string team. Give your all, put up a fight, and make sure you represent yourself and family. It was a very strong letter.”

The captain Brathwaite said that the letter coming from a legend like Lloyd, it was motivating for the newcomers.

The head coach Phil Simmons also held a similar tone about new players on this tour having an opportunity to firm up their place in the squad, with a busy home season coming up for West Indies.

“My rule and message to all the players here is that you are not here to fill in. You are here to give yourself a chance. You have a chance now to seal your place in the team. If you do well here, it augers well for you moving forward.

“You come here and do well in the three ODIs and two Tests, you are putting yourself in a place from where nobody can move you. Only you have the opportunity,” Simmons had said a couple of days after West Indies arrived in Dhaka.

Lloyd’s final words were as much inspirational as it was prophetic. The manner in which they beat Bangladesh after being outplayed on the first four days has been touted as one of West Indies’ greatest Test wins. Mayers and Nkrumah Bonner, the fourth-wicket pair who added a record 216 runs together in the fourth innings, are likely to keep their places in the first Test after this tour, even when the first-choice players return.

“A positive mental attitude will see you through many tight situations which I’m sure you will encounter during this Tour,” Lloyd wrote. “Lastly, success comes before work only in the dictionary. I wish you the best of luck. Please remember most people are judged by the obstacles they overcome.”