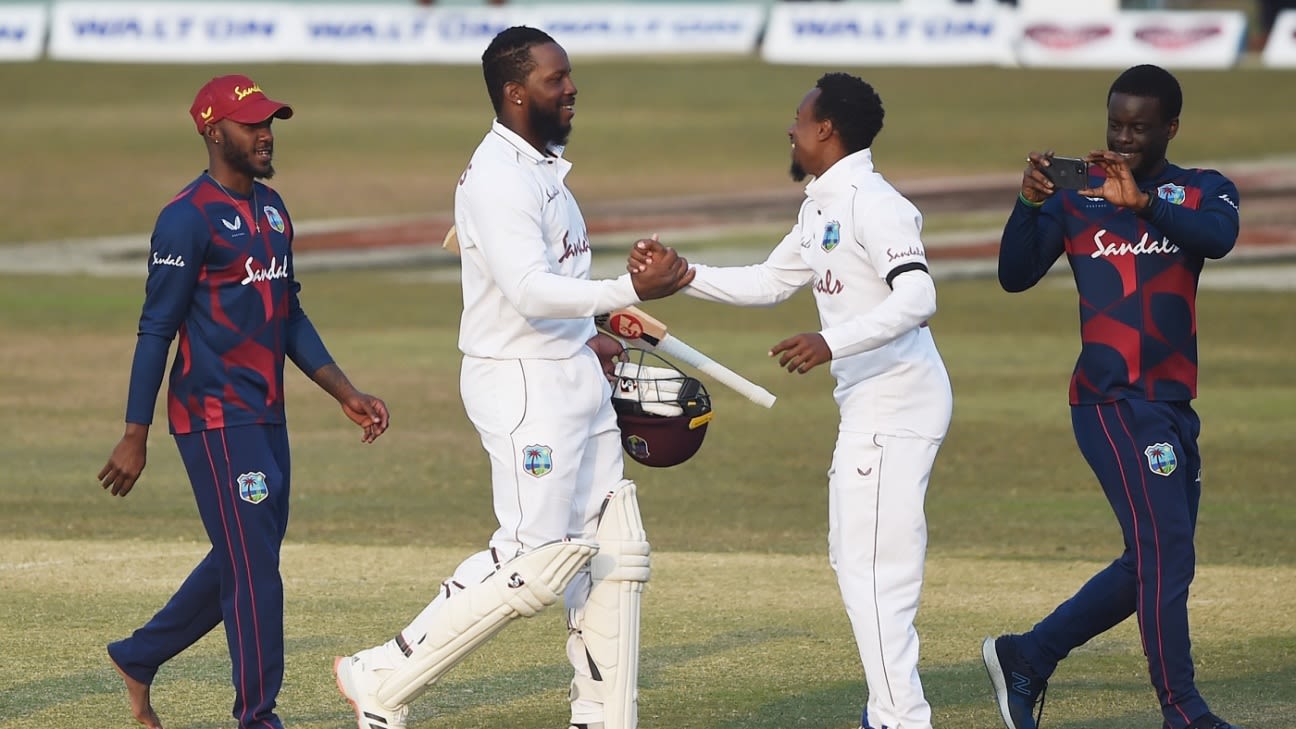 After historic victory, West Indies coach says he’s “tired of these one wins and then struggling for the next three or four games”

West Indies coach Phil Simmons says he wants his side to keep up the intensity after a win so that it doesn’t become a solitary highlight in the Test series against Bangladesh. West Indies took a 1-0 lead after their historic three-wicket victory in Chattogram, with the second and final Test to be played in Dhaka from Thursday.

“I am tired of these one wins and then struggling for the next three or four games,” Simmons said. “We need to improve on some things and continue the intensity in our preparation. We have to make sure we don’t go backwards again. We are trying hard to put things in place so that we don’t go in that direction.”

West Indies have won just 12 Tests in the last five years, which includes just two Test series wins: 2-0 against Bangladesh in 2018 and 2-1 against England in 2019 – both at home. In as many as six series, they ended up winning only a solitary Test against teams like Pakistan, England, Zimbabwe and Sri Lanka. The most recent such occurrence came in England in 2020, where despite taking a 1-0 lead in Southampton, they lost the series 2-1.

“I don’t think our spinners were as consistent as they can be. They bowled well but there’s room for improvement in our bowling. I think we 90% nailed down how our field placing will be for different batters but we have to be consistent. More than likely, Dhaka is going to spin more than Chattogram.”

Simmons said West Indies’ improved self-belief came to the fore during the two critical partnerships in the game. During the first innings, Jermaine Blackwood and Joshua Da Silva put on 99 runs for the sixth wicket that took them past the follow-on mark. The second innings then featured a 216-run stand between debutants Kyle Mayers and Nkrumah Bonner, the pair taking West Indies to the doorstep of an unlikely victory while chasing 395.

“The main thing is trusting our ability,” Simmons stressed. “I will highlight the partnerships in the first innings between Blackwood and Da Silva. A lot of pressure was put on us in that partnership, and they trusted themselves to come out of it.

Simmons hailed Mayers for his double-century, but also reminded him that come the Dhaka Test, he would have to make a fresh start. “I think the last time [a West Indies batsman made a double-century on debut] was Lawrence Rowe. It is an amazing feat,” he said. “It is all right to do it in the first innings, but to have the temperament in taking us to winning the game made it extra special.

“It is in the history books. You don’t start from 210, you start from zero,” Simmons cautioned. “I know people will forget his double-hundred by the time the next Test is finished. You have to start from zero and do everything you did two days before the game. Most cricketers will know to start over. Sometimes we get into this hype when we have done well. Over the next few days, we have to get back down to earth and know that the game starts from zero again.”

Simmons also said that Bonner’s 86 was crucial to setting up the West Indies win, but he would have liked to see him get the extra 14 runs.
“I think he played a special innings too. I am disappointed he didn’t get a hundred,” Simmons said. “The way he batted, he deserved one. I am sure that will come if he continues to play this way. The partnership is what matters.

“Kyle may have scored a double-hundred but Bonner’s partnership with him is what set things up. The fact that we didn’t lose a wicket in the first two sessions gave us that push. We were the only team that could win the game.”