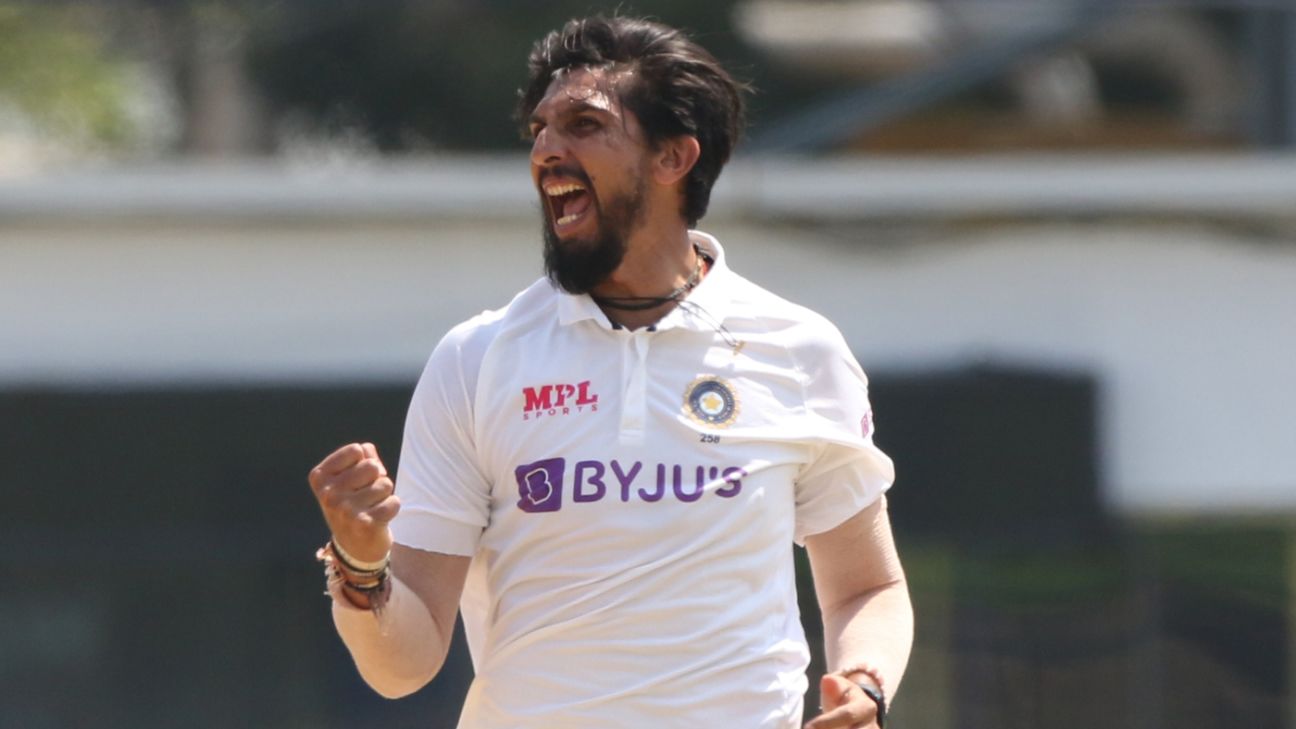 Ishant Sharma acknowledged that his career has been “quite a rollercoaster” after becoming the third Indian pacer, behind Kapil Dev and Zaheer Khan, to get to the 300-wicket milestone in Tests – in his 98th match, against England in Chennai. Long hours out in the field as England made merry have left Sharma “a bit sore”, but he feels the Indian bowling unit has done a “pretty good job” considering the “road” England played their first innings on.

England, after winning the toss, batted through the first two days before stopping at 578, and after taking a 241-run lead, added 178 more, leaving India to chase 420 to win the first of four Tests. India reached 39 for 1 by close on the fourth day, still 381 away from the target, but Sharma sounded a positive note.

“First two days, actually I was feeling like we were playing on a road, to be very honest,” Sharma, who got to the 300-landmark when he trapped Dan Lawrence lbw on Monday, told the official broadcaster. “But then, on the fourth day, it started turning a bit, and then we caught a bit of a break. But I think we bowled pretty well, even those two days when nothing was assisting us as fast bowlers, and the spinners as well. I think we contained them 260 on a flat one on day one, I think we did a pretty good job.

“[On the fifth day] I think it all depends how we start up tomorrow. If we get a good start, then I’m sure we can chase this down, because we have a batting line-up who are very fearless. So we are obviously very positive about this, so it’s just about the start, and then we look how we go through the innings.”

Fortunately for Sharma, the England second innings lasted just 46.3 overs, giving him enough time to pick up the wicket he needed to get to 300 – the slowest of 35 bowlers to get to there in terms of matches played – but allowing the sore body to rest. He is, after all, coming back from an injury. After the 2020 IPL, where he played just one match, he had only played four T20 matches for Delhi in the Syed Mushtaq Ali Trophy.

“For a fast bowler to get close to 100 Tests in India is not a joke, and it’s a fantastic, fantastic achievement”

“Quite a rollercoaster life till now – I enjoyed it, pretty much, a lot of experiences through my career,” Sharma said of the feat. “There’s a lot of mentors in my life, who taught me how to bowl in the subcontinent, and even when we go abroad, what kind of lengths you need to go to… so I think I enjoyed that quite a lot.

“I’m a bit sore, just played a four-overs game, a T20 game, in domestic and then came back and bowled straightaway 35 overs in three or four days on the field, so you can say I’m a bit sore.”

Paying tribute to his colleague, R Ashwin – at the other end of the spectrum among 300-plus wicket-taker as the quickest in the world to the mark, in 54 Tests – said at a press interaction, “Ishant has been one of the most hard-working cricketers I’ve seen in that Indian team. He’s worked extremely hard for more than just one reason, because being that tall itself requires a lot of facets to be managed through a career which has panned out almost 14 years, if I’m not wrong with the numbers.

“From the Ishant that went to Australia, got Ricky Ponting out, and then has gone through so many other tours, he’s had his fair share of injuries. For a fast bowler to get close to 100 Tests in India is not a joke, and it’s a fantastic, fantastic achievement. And 300 club – he’s the third Indian fast bowler to get there and the only one closer to him after that is probably Javagal Srinath, who is match referee at this game. So I can keep going and keep complimenting Ishant. I really do wish to see him get to 400 and probably 500, which would be a sort of a roadmap for a lot of quicks going forward.”