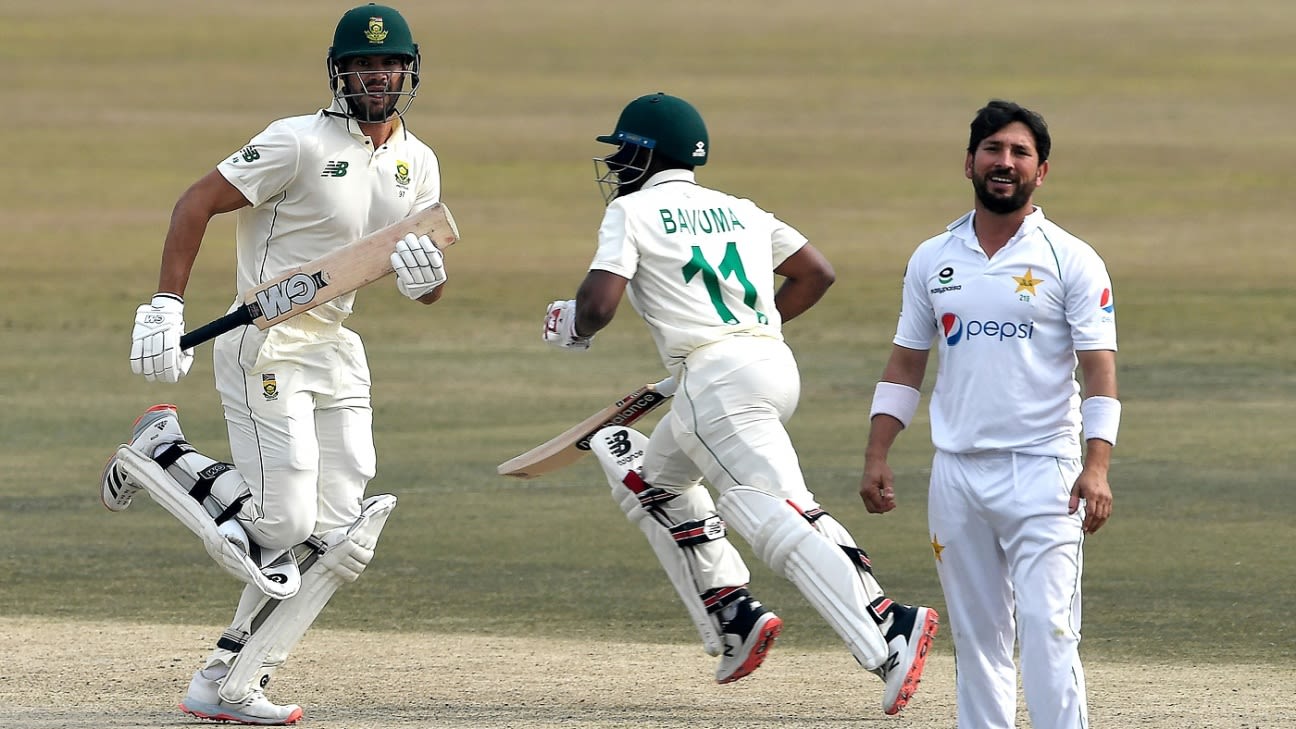 Aiden Markram scored his fifth Test century, and first since March 2018, to keep South Africa in the hunt for completing the highest successful chase in Pakistan. They are still 151 runs behind but with Markram in his groove, his fourth-wicket partnership with Temba Bavuma worth 84, and the scoring rate hovering around three an over, South Africa are in with a chance, if they can avoid a lower-order collapse.

Pakistan will know that their visitors are prone to crumbling – they lost five wickets for 37 runs in the first innings – and they are two wickets away from the start of the tail. With the second new ball six overs away, a decent amount of turn on offer and variable bounce becoming more evident, there’s enough to keep their attack interested, especially as they enjoyed early success.

Hasan Ali struck twice in the first five overs, after a poor fourth day in which he conceded heavily, to remove Rassie van der Dussen and Faf du Plessis. He bowled van der Dussen with the third ball of the day, with late swing that snuck past the inside edge, and had du Plessis trapped lbw by low bounce. Du Plessis reviewed but ball-tracking showed middle and leg stump would have been disturbed.

Instead of sending in Quinton de Kock, South Africa opted to stick to the same batting order they used in the first innings with Bavuma coming in at No. 5. He batted with more intent than he has come to be known for, and was especially comfortable on the back foot and the sweep. He also played a strong supporting role for Markram, whose confidence has grown as his innings has developed.

Notably, Markam was comfortable enough to play the ball late and has navigated the low bounce well. He kept out yorkers from Shaheen Shah Afridi and took on Yasir Shah, cutting him for four and dancing down the track to loft him over long-off for six. His hundred came up the ball before lunch with a single to midwicket to break a drought that has stretched 26 innings. But his celebrations were subdued, with the knowledge there is still work to do.

Faheem Ashraf was the most threatening of the Pakistan attack and found significant swing but only bowled four overs as Babar Azam juggled his bowlers in an attempt to find a breakthrough. In just his second Test as captain, Azam faces a stern challenge as he seeks to find ways to secure the series.

England hire team chef amid concerns about Test tour catering
Mark Wood in doubt for first Test after World Cup hip injury
‘It is not true’ – Langer adamant no cricket rift exists
New Zealand pick Bracewell and bowl; India bring in Hooda for Samson
Warner – ‘I’m not a criminal. You should get the right of an appeal’