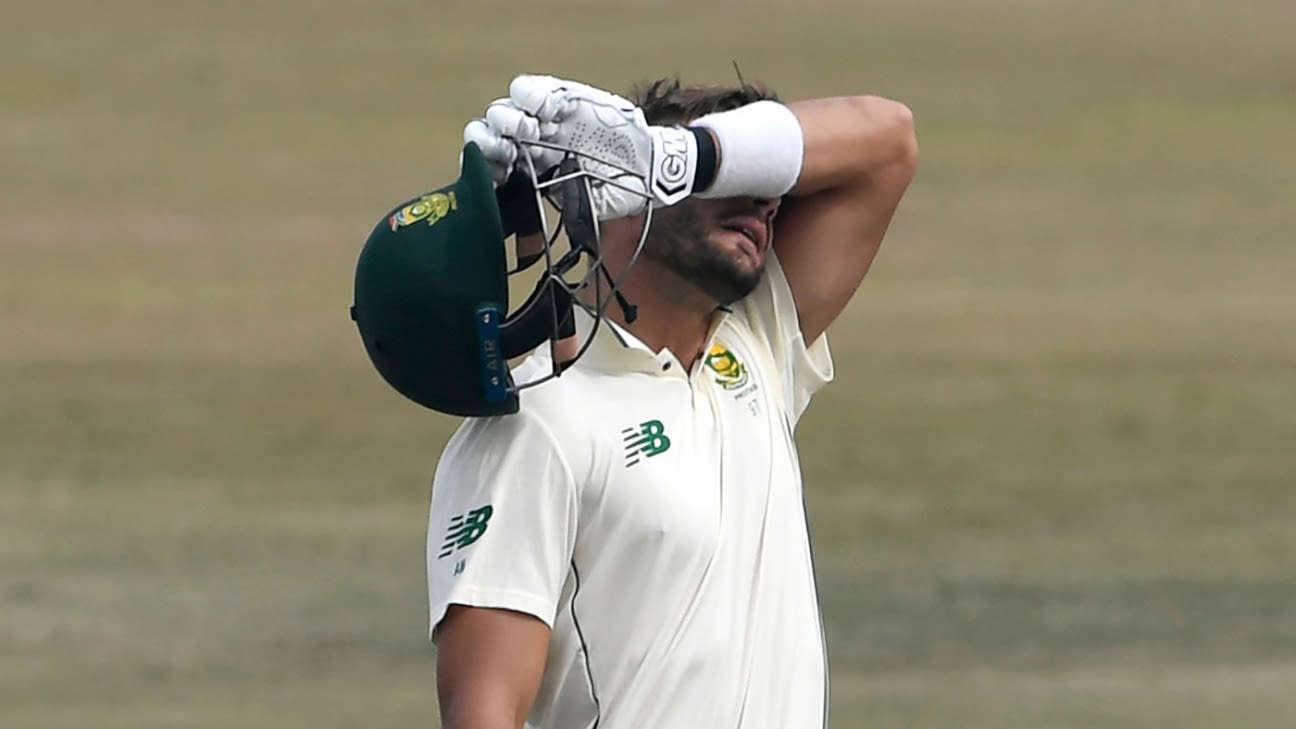 He made a second-innings 108, but was ‘more hurt’ than satisfied due to South Africa’s series loss

Aiden Markram could not enjoy his first century in the subcontinent because it came in a defeat for South Africa, who have lost four of their last five series and have not won a series away from home since March 2017. Markram made his debut six months after the 2017 series win, and has since been part of tough tours to Sri Lanka and India, and the disappointment of losing again in the subcontinent denied him the opportunity to soak in his individual triumph.

“We are competitive people so to lose a game and a series, means more than personal performances. There is a lot more hurt than satisfaction from my side,” a visibly despondent Markram said after South Africa’s 95-run loss in Rawalpindi on Monday. “It felt like there were stages where just when we started making progress and getting ahead, we would give it away. That’s where the hurt comes from. It’s time for us to take lessons and learn and to not make the same mistakes again.”

South Africa squandered several positions of advantage in the second Test, from dropping Mohammad Rizwan, who scored 115, when he was on four, to unravelling against the second new ball when the chase was set up, and their inconsistency irked Markram. “The mood is pretty down at the moment. There have been patches through the series, where I felt we played really good cricket and looked the part but we couldn’t be in those patches for long enough. That’s the feeling in the camp,” he said.

But the main cause of South Africa’s inability to consistently challenge Pakistan was a slew of batting collapses, which got worse as the series wore on. South Africa lost seven or 87 and nine for 70 in Karachi and five for 37 and seven for 33 in Rawalpindi and believe conditions contributed to their difficulties. “You have to appreciate the fact that we are in the subcontinent and getting in is really tough. The nature of the conditions often suggests that wickets will fall in clusters,” Markram said. While South Africa know the cause, they “haven’t got the solution for it,” according to Markam, although the answers may lie with his performances.

Markram had his best series in the subcontinent and finished as the top run-scorer overall with 74 in Karachi and 108 in Rawalpindi. In both matches, he demonstrated the temperament to get through the new ball and the technique to play on surfaces where the ball turned and kept low. He also probably put paid to suggestions South Africa are still searching for a permanent partner to Dean Elgar at the top.
Markram missed almost all of the 2019/20 season with hand injuries, so South Africa used Pieter Malan and after that they picked domestic run-scoring machine Sarel Erwee in their last two Test squads as a reserve opener. Markram’s form means Erwee’s window of opportunity could be closing while Markram’s own may be widening.

With two fifties and a hundred from four Tests, measured assessments of how the team has performed (as opposed to the “I-don’t-knows “coming from temporary skipper Quinton de Kock) and his history as a World Cup winning under-19 captain, Markram has made a case for the Test captaincy. Though he acknowledged it’s a job he would like to do, he was careful to play down his chances of succeeding de Kock immediately.

“I haven’t given it too much thought. I don’t think, with four Test matches this season, it allows a player to all of a sudden think along those lines. It’s something I would naturally enjoy doing but nothing I have given too much time to,” he said. “My goal is ultimately to score runs and win games. That’s still the focus for me.”

Markram won’t get the opportunity to do that for the rest of this season as South Africa do not have anymore Tests scheduled after a three-match series against Australia was indefinitely postponed. With the FTP still unclear, South Africa are only likely to play Tests again towards the end of the year but ESPNcricinfo understands there is some talk of Cricket South Africa attempting to organise a winter series, which Markram would welcome playing.

“If it were to happen, it would be great and players would be over the moon,” Markram said. “It would have been nice to play against Australia in a home series. It’s always a really exciting series to be a part of and normally quite good cricket on display. It’s not ideal that the series isn’t going ahead. We’re just going to have to wait over the next couple of weeks to find out when the next Test series will be.”