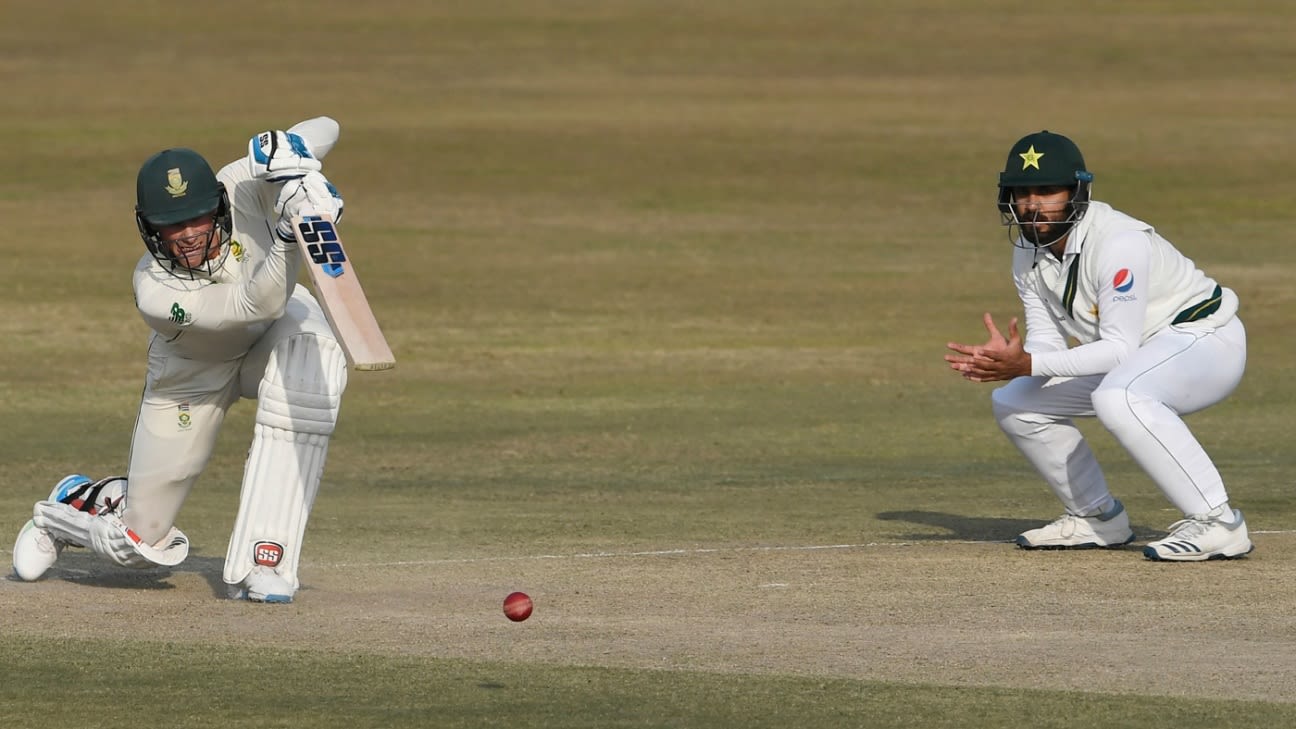 If the visitors manage to pull it off, it will be the highest successful chase in Pakistan

Free your mind and the runs will surely follow.

That’s the message South Africa’s coaching staff gave their batsmen as they set out in search of the highest successful chase in Pakistan.

“We’ve encouraged the guys to be themselves and just play. We’ve done a lot of work in terms of clearing their minds and playing within their own characters,” Enoch Nkwe, South Africa’s assistant coach said. “And when the opportunity is there to speed up the game, do that and if it’s not there, absorb pressure as well as we can.”

Nkwe confirmed that the magnitude of the task has not put South Africa off pushing for victory, especially as a draw would give Pakistan the series anyway. But they plan to be cautious about how to go about getting the 243 runs they need to level the two-match series. “We’ve spoken about making sure we keep up the intensity, we stay in the moment and we don’t get carried away. But we are not going to go in waiting for 5 o’clock. We are going to play and let’s see how far we get,” Nkwe said.

South Africa will face 98 overs on the final day, light-permitting, which means they need to score at less than 2.5 runs an over. More importantly, for Nkwe, they need to make sure they bat well in pairs. “There’s a lot of belief, and guys backing themselves a bit more and freeing themselves up. We want to win this. We want to build big partnerships.”

Aiden Markram and Rassie van der Dussen‘s second-wicket stand is worth 94 and has been almost incident-free. Crucially, they saw South Africa to the close of day four without any late-in-the-day wobbles, as was the case in Karachi. There, South Africa were 175 for 1 towards the end of the third day, Markram and van der Dussen had put on 127 runs together and the team were 17 runs in the lead before they lost three wickets for 10 runs and the momentum. Their remaining six wickets fell for 58 runs on the fourth morning and Nkwe does not want to see a repeat of that.

“In the last Test match right at the close of play, we lowered our intensity. That was an area we looked at and it’s good to see the guys responding. It’s good that the same two (Markram and van der Dussen) that were in the situation in the first Test are taking full responsibility to make sure the team doesn’t fall into that again,” Nkwe said. “Hopefully they can build on this partnership because that is going to be key. We know in the subcontinent wickets can fall in clusters and that’s something we are trying to avoid.”

South Africa have already collapsed once in this Test, losing five wickets for 37 runs in the first innings and have suffered similar fates over the last few seasons. Many reasons have been mooted for the line-ups frailty, including loss of confidence due to overly spinner-friendly conditions on tours to Sri Lanka and India and overly seamer-friendly conditions at home and loss of experience after the retirements of AB de Villiers and Hashim Amla in the last three years.

Chances are that the root cause of the problem is a combination of those factors and only a change in form and results will suggest the corner has been turned. Nkwe said South Africa know that. “The batting unit know they haven’t done as well as they wanted to. We wanted to score more hundreds, so hopefully tomorrow we can have a hundred or two, if all goes well. Hopefully tomorrow we can look to take a step forward as a batting unit. That will give us a lot of confidence for future series. The wicket is playing quite well and the guys just need to apply themselves.”

Asked if the team knew about or would take inspiration from West Indies’ successful chase of the highest total in Asia, Nkwe said the team hadn’t been keeping too close an eye on the Chattogram Test but would get up to speed before the final day in Rawalpindi. “We haven’t been following that. We’ve been focusing on our game and we need to really stay connected in terms of what we are looking to achieve. But I’m sure tonight when we watch some highlights or go through Cricinfo guys might find some sort of motivation,” he said. “We also have enough cricketers in our changeroom that have been role models and are really encouraging the guys. Every individual understands how important it is that we chase this down.”

South Africa do not have any more Test cricket scheduled this summer after Australia postponed their series in South Africa which was due to be played in March. Discussions are ongoing about lining up winter opposition and confirming fixtures for next season, when South Africa hope to be able to compete more strongly in the World Test Championship. They will finish this tournament in sixth place.

Sri Lanka on the verge of a selection committee shake-up
“Will Nag Me For Rest Of My Life”: Australia Star On Missing India Tests
WPL player auction likely to take place on February 11 or 13, Mumbai could host first edition
🌀How much has that spun?! Parkinson Bowls Imam Through The Gate #shorts #spin #legspin
‘Last time we got served a green top’ – Smith defends abandoning tour game in India