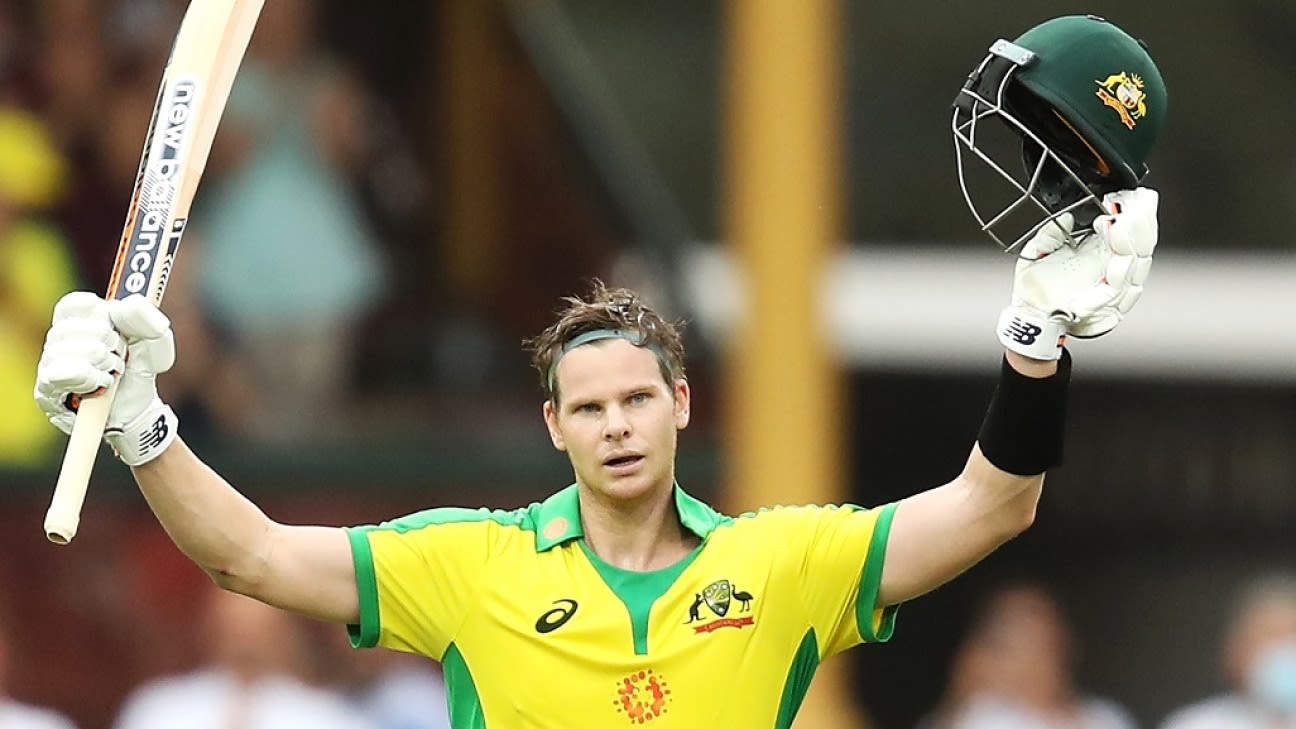 Smith was also named ODI player of the year, Pat Cummins was the Test player and Ashton Agar took the T20I honour

Steven Smith has won the Allan Border Medal for the third time, also taking the ODI awarded, while Pat Cummins was named Test player of the year and Ashton Agar earned the T20I honour at the Cricket Australia annual awards.

Smith (126 votes) finished ahead of Cummins (114) and Aaron Finch (97) for the top honour, joining David Warner as a three-time winner behind the leaders Ricky Ponting and Michael Clarke.

In a season disrupted by the Covid-19 pandemic, the voting period took in Australia’s away series against India and South Africa early last year, the aborted ODIs against New Zealand at home, the white-ball tour of England, and the home season against India.

The voting was conducted on a 3-2-1 basis for every match under consideration with all players voting along with media representatives and umpires.

Across the formats Smith scored 1098 runs with four centuries, three of them coming in ODIs – including the back-to-back 62-ball tons against India at the SCG – along with his century in the Sydney Test. Despite missing the ODIs against England due to concussion he finished as Australia’s second-highest run-scorer in the voting period behind captain Finch.

“I was a bit surprised, I didn’t feel I had the biggest Test summer, which I think holds the most votes,” he said. “I think my one-day cricket was pretty good last year, so a lot of votes there, but it’s obviously an honour to win this for the third time.

“I thought I played some good [one-day] cricket and I thought our group were playing some good cricket as well. We beat England in England, I didn’t play any part in that series either, so that was nice. Back here against India as well I thought we played some really good cricket so we’re progressing nicely and I felt as though I had a good impact this year, which was pleasing and hopefully I can continue to do so.”

With just the four Tests under consideration this year, it was little surprise that Cummins took out that title after claiming 21 wickets at 20.04 against India. He finished comfortably ahead of Josh Hazlewood and Marnus Labuschagne.

In T20Is, left-arm spinner Agar finished ahead of Finch and David Warner despite missing the series against India due to a calf injury after taking 13 wickets at 12.46 and an economy rate of 6.75. That included a hat-trick against South Africa as part of a haul of 5 for 24.

Josh Lalor, the Melbourne Renegades pace bowler, took out the community impact award for his work on Reflect Forward, a joint movement between racism education company One Love Australia and the Australian sports industry.

The award recognises players who have made a positive contribution to the broader community through extraordinary service to the public such as the support of a charity, social cause or community event.

India Script History, Become First-Ever Champions Of U19 Women’s T20 World Cup
‘This was a shocker of a wicket’ – Hardik Pandya critical of Lucknow pitch
“Grassroots Is The Most Important” | Chris Woakes & Keith Forman | LV= For The Love Of The Game
Kyle Jamieson returns for Test series against England
Josh Hazlewood to miss first Test against India