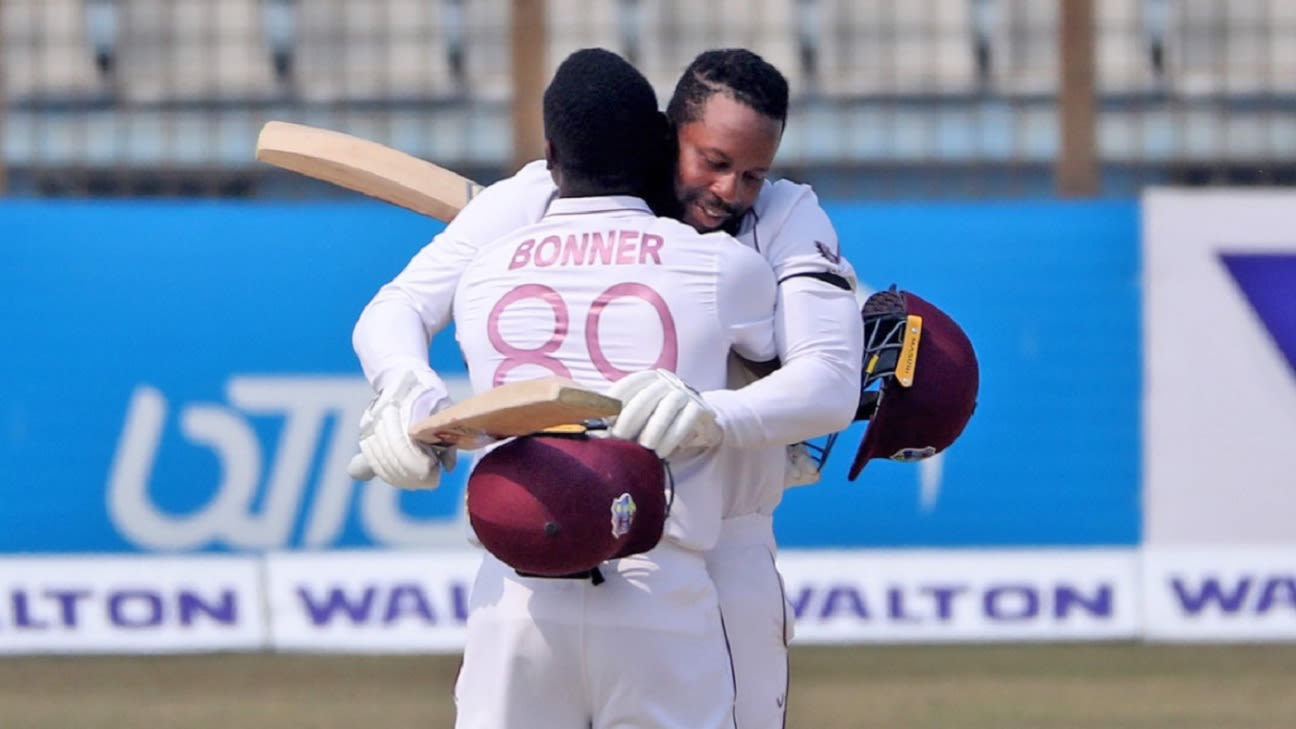 “We never gave up. We always said in the dressing room that we need to keep fighting.”

When West Indies stepped out for the fifth day of the Chattogram Test, every conceivable odd was against them. They had been thoroughly outplayed by Bangladesh for the first four days, and having already lost three wickets in the second innings, they needed another 285 runs for an improbable victory. Taking guard in the middle were two debutants in Kyle Mayers and Nkrumah Bonner, who had made just 57 runs combined in the first innings.

Much like they had done in the 2018-19 home series, Bangladesh would have looked to wrap up a comfortable win, but this time, Mayers (210*) and Bonner (86) had other plans, stitching together a heroic 216-run partnership to help West Indies complete the fifth-highest chase in Test cricket, as well as the highest by any team in Asia.

Mayers, who took the Man-of-the-Match honours for his stunning double-century, later said he had always backed himself and his team-mates to get the job done.

“I am always a positive person. I always believe in my abilities and the team, and I always was positive [to finish the chase],” he said. “We never gave up. We always said in the dressing room that we need to keep fighting. The captain and coach told the bowlers as well that you need to keep fighting on a pitch like this. Shannon [Gabriel] put in great effort to lead the way.

“It’s a great feeling to be playing Test cricket. Then to go on and score a century, and then to make it a double, and then going on to win this Test. I would like to be thankful to my team-mates, my coaches and family back home. A guy making his debut and making a double should inspire all youngsters to work hard and reach this level.”

West Indies captain Kraigg Brathwaite, who himself had led the way in the first innings by top-scoring with 76, said that his team had been fueled by the losses in the 2018 tour of Bangladesh, when they were defeated in both Tests in under three days. He also denied suggestions that he had been dealt a short hand with a “depleted” squad.

“I won’t say it was a depleted side. I was very confident when leaving with this side. We were outplayed in 2018, and we were confident we would do better this time,” Brathwaite said.

“I have believed in this team from day one. It’s just about believing in ourselves and backing our plans, and that’s what we have done till day five. We lost some momentum with three wickets in the evening yesterday, but the pitch was playing well. We knew it was an open game. We trusted our plans, and Bonner and Mayers showed that they can stick to the plans, and make it work.”

Bangladesh’s captain Mominul Haque conceded that his bowlers “didn’t create enough chances” or consistently “bowl in the right areas”, but was encouraged with the level of play his team had shown for the first four days.

“All credit goes to Bonner and Mayers who batted really well. On the last day, if the wicket was a bit more helpful for spinners, we could have created more chances, but we didn’t grab those chances,” Haque said.

“We lost, but we got some positives. We played the first innings as a team, and we dominated first four days. Mehidy [Hasan Miraz] played really well, and he bowled very well too. Fitness-wise, it was very difficult, especially in the first innings, to play a Test match after no four-day cricket for a year.”