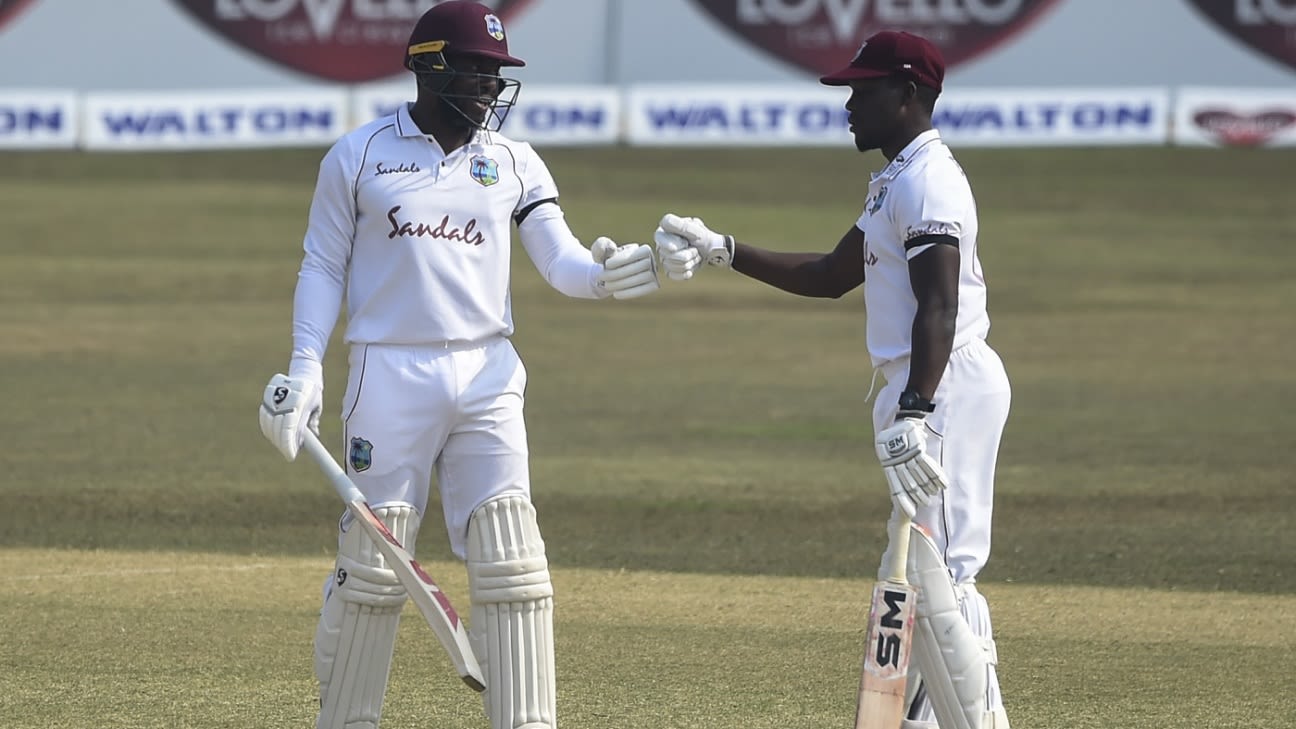 Kyle Mayers and Nkrumah Bonner, the two debutants, kept West Indies’ hopes of pulling off a miracle alive on the fifth morning of the first Test.

Resuming the day on 110 for 3, Mayers and Bonner extended their stand to 138 and took the side to 197 for 3 at lunch, 198 short of the target. At the interval, Mayers was nine short of his maiden Test hundred, while Bonner was keeping him company on 43.

The two displayed outstanding temperament and trusted their contrasting gameplans. Mayers continued in the attacking vein, hitting 11 fours and a six to strike 59.47. Bonner frustrated the bowlers with his defence, moving along at a more patient strike rate of 29.45. The comparisons were already being made to Cheteshwar Pujara and Rishabh Pant’s knocks in India’s win against Australia in Brisbane last month.

The Bangladesh spinners, on the other hand, were guilty of not bowling enough full-length deliveries. That allowed Bonner and Mayers to wait on the back foot and adjust to whatever turn and bounce the pitch offered. And if there was any width provided, the duo didn’t hesitate to deploy the cut shot.

But it wasn’t as if Bangladesh didn’t create any opportunities. In the first hour of the day alone there were at least three chances that should have been converted into wickets. Mayers was on 47 when Taijul Islam got one to straighten from around the wicket to hit the batsman on the pads. There was a loud appeal for lbw but Richard Illingworth deemed it not out. Bangladesh captain Mominul Haque didn’t opt for the review but replays showed Mayers would have been out had they done so.

Shortly afterwards, Mehidy Hasan Miraz induced an outside edge off Mayers bat but this time Najmul Hossain Shanto put it down at first slip. The resulting single took Mayers to his maiden Test fifty.

Bangladesh missed another opportunity to overturn an on-field decision when Nayeem Hasan got one to turn sharply from outside off and ping Bonner’s pads. Illingworth once again ruled it in the batsman’s favour. Replays, once again, confirmed he was wrong.

When Mustafizur Rahman was brought into the attack, Mayers welcomed him with a four and six off successive deliveries. Bonner, meanwhile, was happy to keep his end occupied. But when Hasan dropped short, he didn’t hesitate in swatting the offspinner to the square-leg boundary twice in one over.

Needless to say, Bangladesh missed the control and guile of Shakib Al Hasan, who hasn’t taken any part in the Test after walking off with a thigh injury on day two.